No spoilers: Trump Administration not disclosing troop levels or timelines in continued fight for Afghanistan 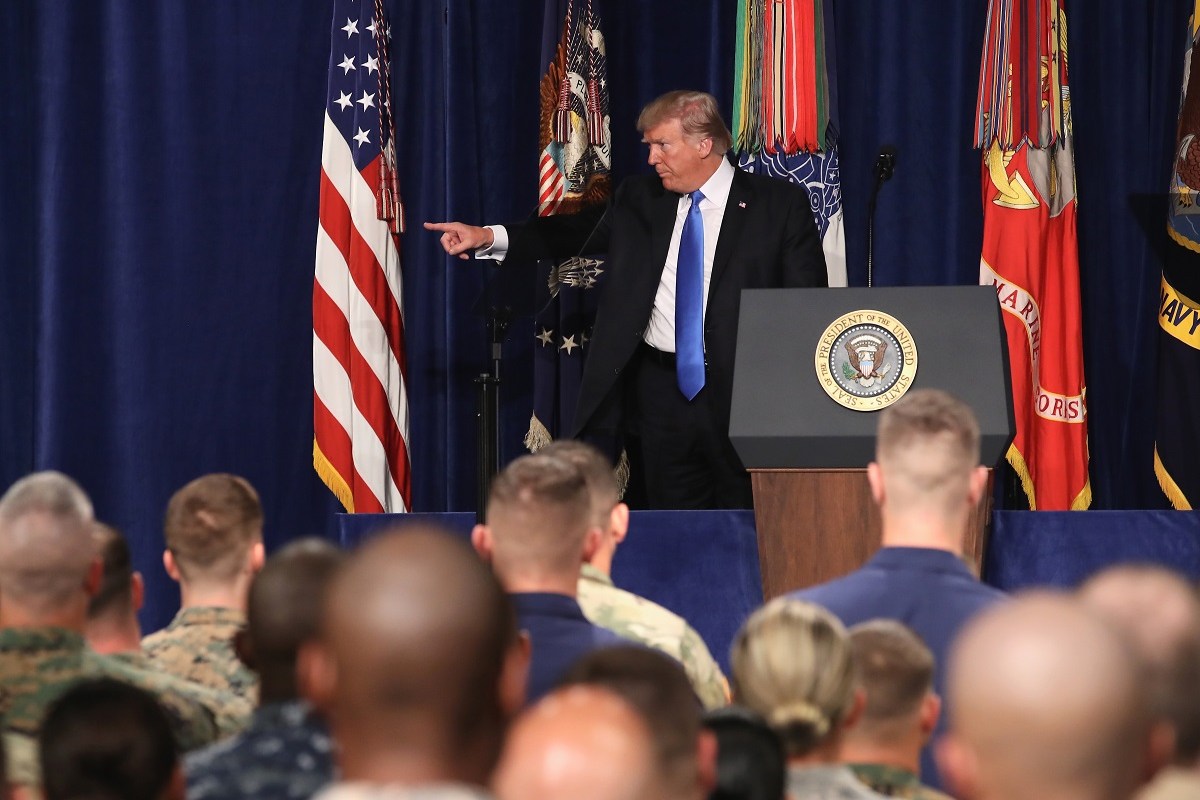 Mark Wilson/Getty Images
ARLINGTON, VA - AUGUST 21: U.S. President Donald Trump acknowledges members of the military before delivering remarks on Americas involvement in Afghanistan at the Fort Myer military base on August 21, 2017 in Arlington, Virginia. Trump was expected to announce a modest increase in troop levels in Afghanistan, the result of a growing concern by the Pentagon over setbacks on the battlefield for the Afghan military against Taliban and al-Qaeda forces. (Photo by Mark Wilson/Getty Images)

More U.S. troops will head to Afghanistan under President Donald Trump’s new plan for victory there, but when, how many and how long they will be there will stay under wraps.

Trump delivered a 25-minute prime-time speech in front of servicemembers assembled at Joint Base Myer-Henderson Hall in Arlington, Va on Monday night. It was short on details, but the President made it clear that any updates on the now 16-year-long war in Afghanistan would be similarly unclear.

?I will not say when we are going to attack, but attack we will,? Trump said. But don?t expect to see a number of troops or timelines for bringing any of them home anytime soon, said the Commander-in-Chief.

It?s part of his new strategy, along with ending nation-building efforts and increasing pressure on Pakistan to cooperate in the War on Terror.

Tonight marks a serious shift for Trump. As a private citizen and later as a candidate, Trump advocated for U.S. withdrawal from Afghanistan and shifting funds to domestic interests.

The president admitted to and explained the shift Monday night, saying since his inauguration, he has spent a great deal of time studying the situation in Afghanistan, and trying to take some lessons learned from what he now deems an inappropriately hasty withdrawal from Iraq.

?My original instinct was to pull out [of Afghanistan],? Trump said. ?And historically I like following my instincts.? But after ?many meetings over many months? culminating at Camp David last Friday, Trump made the call to double down in Afghanistan.

The staff around him may have played a part in his changing views.

Chief strategist Steve Bannon is out and much of the President?s senior staff is now stacked with former generals who have advocated for an Afghanistan surge for months — John Kelly as White House Chief of Staff seat, Bannon nemesis H.R. McMaster as National Security Advisor and James Mattis leading the Pentagon as Defense Secretary.

Mattis was authorized to send as many as 3,900 more Americans into Afghanistan in June, but chose to wait until the Trump Administration’s Afghanistan policy was fully hammered out.

“I am very comfortable that the strategic process was sufficiently rigorous,” Mattis told Politico yesterday, speaking aboard a military aircraft on an overnight flight from Washington to Amman, Jordan.

Just how many more people the President seeks to send overseas remains uncertain. According to reports, Trump may send between 3,000 and 5,000 troops to the region, adding to the 8,400 U.S. service members and 5,000 NATO troops already deployed there ? still well below the peak troop levels around 100,000 in August 2010.

Since the use of force in Afghanistan was authorized by Congress shortly after Sept. 11, 2001, 2,388 members of the U.S. military have died in combat there and more than 20,000 have been wounded.

RELATED: Steve Bannon might be leaving the White House, but he?s not going to just disappear