Just in case it wasn’t awesome enough, Chewbacca Mom’s fame is now immortalized by Hasbro itself 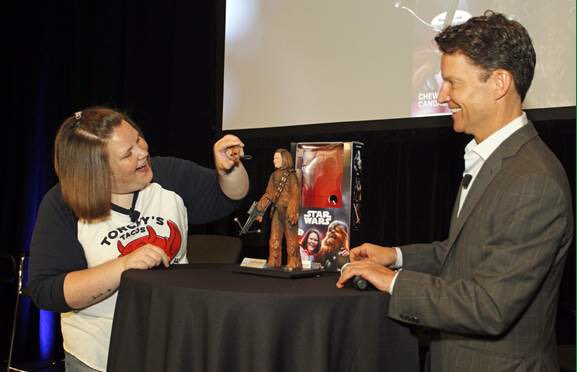 In what could be the crowning achievement for her viral fame, “Chewbacca Mom” now has her own action figure.

The toy has 13 catch phrases including “That’s not me making that noise, it’s the mask.” “I am such a happy Chewbacca,” as well as her signature laughter,according to Entertainment Weekly.

Payne, who is from Texas, donned a talking Chewbacca mask and broke Facebook viewing records with her viral video. It has been seen more than 114 million times since she posted it May 19.

The internet fame has earned her an estimated $420,000 in gift items including gift cards, TV offers and college scholarships for her children.

Thanks SO much, HASBRO. You literally rolled out the red carpet for me and my family. Thanks for making play so much fun!