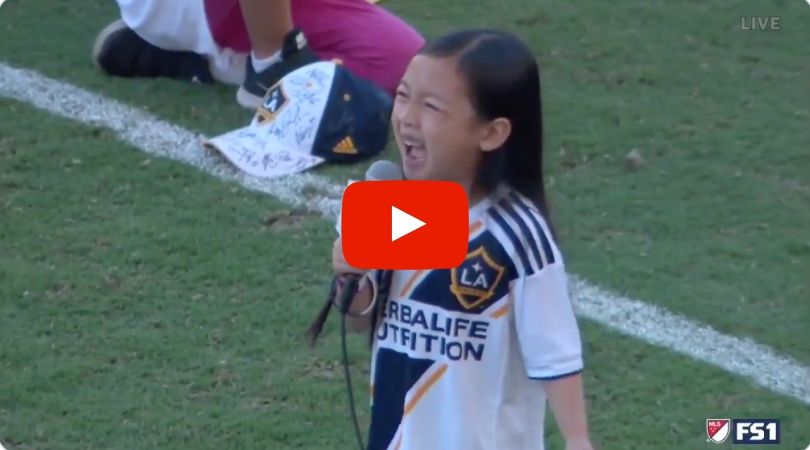 Beyonce? Lady Gaga? Pink? Kelly Clarkson? Nope, it?s Malea Emma Tjandrawidjaja, the 7-year-old ?The Star Spangled Banner? performance winner! Tjandrawidjaja belted out the national anthem to a stunned crowd at the LA Galaxy game against the Seattle Sounders on Sunday night, and let me tell you, I am beyond impressed at this girl! She DOES NOT sound like a 7-year-old at all! Performing in front of more than 25,000 Major League Soccer fans at the LA?s StubHub Center, she appeared as the winner of the Galaxy’s first-ever #GalaxySocial national anthem contest.

The MLS team?s public address announcer introduced the 3-foot-9 star as ?tiny but might?, and mighty she certainly was! She delivered a soulful yet fresh rendition, putting her as a rival to Christina Aguilera. Safe to say she stunned the whole audience, even team members who were smiling throughout her performance, shocked at what they were hearing.

Following her performance, social media erupted and praised the girl over her singing abilities, calling her the MVP of the game! This isn?t the first time Malea impresses the crowd, though! She?s actually quite used to performing, singing since the age of 1 and participating in several talent competitions in downtown LA. She played Carnegie Hall at the age of 5 as the winner of the American Protege International Vocal Competition. She also made her first television debut in 2013, on the Tim and Eric?s Bedtime Story show, and recently performed as Molly in the play Annie at the Hollywood Bowl.

Personally, I?m pretty excited to see her future performances. Looks like Ellen needs to get her on the show pronto! Seriously, just listen to this kid! Not every 7-year-old has that enormous voice, and not to mention the courage to sing in front of that many people, all while crushing it! Listening to the crowd cheer for her at the end as she?s waving gives me all the chills. All. Of. Them.

All the interviews I've done yesterday asked who my favorite singer was. As you might have guessed by the way I sang the national anthem, my favorite singer is @xtina. She is my biggest inspiration in singing! I really hope I can sing with her someday…. 😍 . . #maleaemma #maleaemmavideo #christinaaguilera #xtina #xtinaaguilera #fighter #anthemgirl #viralsinging #viralvideo

This article was originally published on September 28, 2018.