A Definitive Ranking of ‘The Outsiders’ 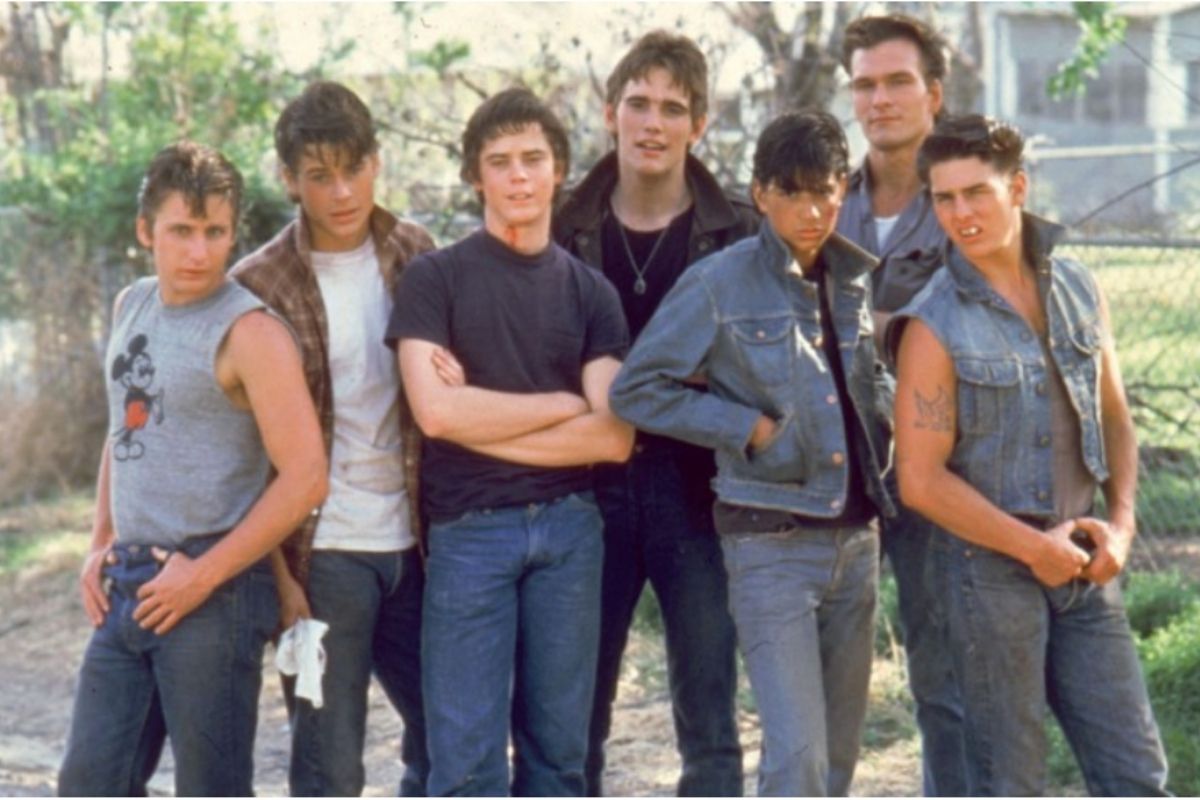 The Outsiders, a melodramatic teen flick bursting with 60’s nostalgia, firmly established the Hollywood brat pack in 1983. Under esteemed director Francis Ford Coppola, this goofy group of talented youngsters transformed into tough greasers who rocked leather jackets and bared glinting switchblades with criminal ease. Read on for the official ranking of these iconic juvenile delinquents.

The Outsiders film was adapted from the 1967 novel by S. E. Hinton, a Tulsa local who wrote the story when she was just 16 years old! Inspired by the real socioeconomic sparring between working-class “greasers” and the wealthy “Socs” in her hometown, Hinton created a timeless coming-of-age tale that’s still taught in high school classrooms. Deeply dedicated to the source material, the legendary director Francis Ford Coppola filmed his 1983 passion project entirely on-location over the course of one spring in Tulsa, Oklahoma. With a cast comprised entirely of energetic adolescents, you can bet it was a wild few months behind-the-scenes. But the details are still pretty shocking.

Having directed such historic masterpieces as Apocolypse Now and The Godfather, Francis Ford Coppola was no stranger to method acting. And he relied on those intense principles to wrangle the cast full of up-and-comers using some… unusual disciplinary tactics. Wanting to ramp up the animosity between the greasers and Socs, Coppola kept the two gangs of actors separated at all times. He even gave the Socs a much higher allowance, according to rumors. This resulted in the heated feud which manifested so intensely on-screen — and even led to real injuries during the boys’ ultimate rumble. Class warfare aside, the set also became a full-out prank war between Matt Dillon, Rob Lowe, Emilio Estevez, and others. Their favorite victim? Diane Lane.

The Outsiders premiered in 1983 and performed modestly well at the box office, earning $33 million. But over the decades, it’s become a cult classic and fan favorite. So attached to his original vision for the film, Francis Ford Coppola released a new DVD, The Outsiders: The Complete Novel, in 2005 which contained 22 additional minutes of footage. This longer edition is a treasure to Outsiders fanatics, like myself. Providing further narrative exposition, Coppola’s re-release is now even more popular than the 1983 theatrical cut.

As the characterization of Francis Ford Coppola’s film remained essentially true to the young adult novel by S.E. Hinton, this ranking derives from each individual greaser’s persona and moral inclination, in addition to the actors’ portrayals, and of course, general hotness. The Socs, including the beloved Sherri “Cherry” Valance (played so sweetly by Diane Lane), sadly do not make the cut.

Long before Tom Cruise found fame through Risky Business and became a bankable action star, he was Steve Randle in The Outsiders. And he did not look good. Cruise’s unusual grin — the actor has a mysterious middle tooth — has always caught attention. But his chompers in The Outsiders are truly something else. Cruise decided to remove the cap that covers his devastatingly chipped front tooth. (Hockey accident.) The result is purposefully unattractive, and Steve Randall’s personality does not do much to challenge our perception. His scenes are relegated to group hangs where Steve is all over his BFF Sodapop Curtis, played by the young, studly Rob Lowe. When standing next to each other, really, it’s no competition. Not to mention Rob Lowe’s recent revelation on an episode of Armchair Expert with Dax Shephard. Speaking freely on the podcast, Lowe admitted that during the New York round of auditions, Cruise “just [went] ballistic” when asked to share a room with his fellow actor at the Plaza Hotel. The Plaza! That’s no real greaser if you ask me.

Okay, I realize that Sodapop Curtis should probably not be so low on the list. But hear me out. Sodapop, the middle Curtis child, keeps the peace between the older, stricter Darry and misunderstood Ponyboy. From the start of The Outsiders, Sodapop charms with a warm heart and likable personality. He’s also, inarguably, gorgeous and lends a next-level male model quality to the gang of misfits. However, Sodapop’s character shows little personal growth. He was always the golden boy of the group, and remains so. Luckily, the extended edition of The Outsiders extended fleshes out Soda’s character through an intimate late-night scene with Ponyboy. When Rob Lowe first saw the heavily edited theatrical cut, he was devastated at the reduction of his character. But that blow didn’t stop Lowe’s career from taking off. Over the years, the actor’s easy charm has earned him starring roles in The West Wing, Parks and Rec, and more. But it takes a little more edge to rank high on this greaser scale.

As the older brother to Ponyboy and Sodapop Curtis, Darry gets a bad rap. The most mature of the greasers, Darry was forced to give up on any college dreams to raise his knucklehead brothers after they were suddenly orphaned. And though he definitely makes a show of it it, Darry does show up for these two boys. He works a strenuous roofing job all day to keep the boys with food on the table — and out of the notorious “boys’ home.” Darry’s love can be tough (He does slap Ponyboy. Not cool!) but his heart is in the right place. Not to mention, he’s played by the late, great Patrick Swayze. Only Swayze could pull off the stiff, overprotective type — who also casually  flips into effortless headstands. Darry is hardcore greaser material, for sure.

Two-Bit Matthews is the comedic greaser in a tight Mickey Mouse tee. While it may seem absurd that Two-Bit outranks any Curtis brother, I do have my reasons. Emilio Estevez, with his dirty blonde hair slicked back, authentically looks the part of a 1965 Tulsa ruffian. He’s not some pretty boy. He displays a keen awareness for the dynamics of the streets during aimless walks with Ponyboy; Two-Bit can bust a bottle at a moment’s notice. But he doesn’t let that severity get him down. As ready for a laugh as he is for a rumble, Two-Bit feels the most natural in the harsh world of The Outsiders, thanks to Esteves’ masterful performance. Then again, the young actor certainly had the resources to prepare. As the son of Martin Sheen (and brother of Charlie Sheen), Esteves understood the intricacies of working under director Frances Ford Coppola long before the other boys were even through auditioning. Prior to filming, Sheen imparted his Apocolypse Now wisdom to his son and many other young actors who frequented the Sheen house. Additionally, Esteves starred in the spiritual sequel to The Outsiders, which was also written by S.E. Hinton: That Was Then, This Is Now.

Johnny! Poor, sweet Johnny. This puppy dog greaser really is dealt a bad hand throughout The Outsiders. The scrawniest and shyest of the bunch, Ralph Macchio’s performance is tonally perfect in regards to S.E. Hinton’s emotional text. Reportedly, Macchio refrained from most of his co-stars’ backstage antics throughout filming. The 21-year-old actor was too focused on understanding his character. That work ethic pays off. Even when drenched in another boy’s blood, you cannot help but hurt for this traumatized little guy. Of course, Johnny delivers the film’s most famous and heartwrenching line: “Stay Gold, Ponyboy.” And no one could have done it better. Macchio would continue to play the underdog in the lucrative Karate Kid franchise, which has now found a revival through Netflix’s (delightful) Cobra Kai. But to me, no Macchio scene can ever beat his voiceover at the close of The Outsiders which includes his full reflection on Robert Frost. As Johnny explains the significance of “Nothing Gold Can Stay,” it is simply too much to bear. Every time. Pass the tissues.

Spunky and sheepish, Ponyboy is the ultimate protagonist. While the journey of Johnny Cade drives the plot of The Outsiders, it’s Ponyboy’s personal experience that makes the story memorable. Unsure of his place among the greasers — Ponyboy is the youngest but lacks Johnny’s sheer vulnerability — bookwormish Ponyboy comes up against the violence of the Tusla landscape as, literally, an outsider. He’s picked on and looked over. He tags along, without deciding plans. Ponyboy is defined by the more assertive characters in his life — until this angsty orphan finally comes into his own. C. Thomas Howell went on to act in some other 80’s faves, including the star-stacked Red Dawn. Following the brat-pack era, he’s kept busy appearing in many action films and television shows. However, none of these roles are as renowned or inspired as his original Outsiders debut. Playing Ponyboy Curtis is the kind of rare and golden opportunity that comes along once in a lifetime. His boyhood is captured and remembered forever on the screen, and for that, Ponyboy is a powerful greaser. Not the most powerful though. That coveted title is reserved for Dallas Winston.

Dallas Winston struts around the barren Tulsa hood like a leather-clad rooster: all cocky, volatile, tough — excluding his sweet spot for Johnny Cade. Next to Ponyboy, Dallas looks like a hardened criminal dropping alpha orders, bullying children, and toting a small pistol. Of course, it’s Matt Dillon’s mad interpretation that really sells goold ole Dally. Although the character exhibits some problematic behavior (to say the least) at the drive-in, Dillon exudes an impenetrable cool… that’s only rocked by true tragedy. Dallas’ arc within the story is Shakespearean in scope, as Dallas goes on to waste away in a grand display of urban brutality.

But leading up to his dramatic demise, Dallas offers enough mean grins and tough one-liners to keep us daydreaming about greasers for, well, the next 40 years at least. Dillon, an instant heartthrob, would reprise the greaser image for Francis Ford Coppola’s Outsiders spin-off, Rumble Fish. But if you really want a treat, catch Dillion (And Emilio Estevez!) in the early, innocent feature Tex. Both Rumble Fish and Tex have based on S.E. Hinton novels, but the unique farm setting of Tex shows off Dillon’s adolescent range.

Editor’s Note: This article was originally published on January 12, 2021.

WATCH: George Clooney’s First Starring Role was in “The Attack of the Killer Tomatoes”