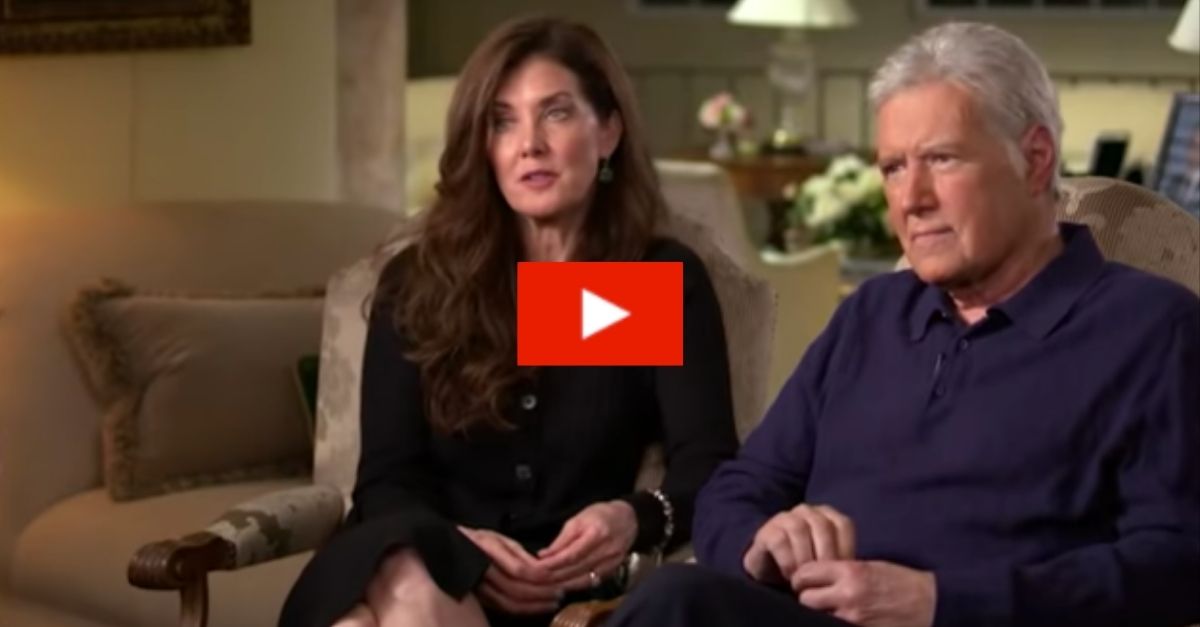 Jeopardy! host Alex Trebek, who has been the game show host since 1984, has been busy since COVID-19 pushed everyone indoors. While battling his stage 4 pancreatic cancer diagnosis since March 2019, he was still hosting the show until the pandemic hit. And even after that, he would film openings for whatever the show needed next, and he also wrote a new memoir, The Answer Is…Reflections On My Life.

In this memoir, Alex dives into his personal life about his beautiful 30-year love story with his wife Jean Currivan Trebek and “how love has kept him alive.” He told People Magazine, “She’s kept me alive. If it weren’t for Jean, I’d have put myself out of this a long time ago,” explaining how his motivation to do his best to stay strong comes from her.

Celebrating their 30th anniversary back in April, Alex romantically explained in his book what it was like meeting Jean for the first time, ?With Jean it just happened. Sometimes you look at something, you look at someone, and you know. I mean, you?ve heard stories of people who meet and decide within half an hour; I knew this was going to be the person I?d end up with. With Jeanie that?s how it was. I wasn?t looking for love. But I recognized at a gut level that here was someone who was going to complete me as a human being.?

Check out @people's new cover! Read the full story in the link in our bio!

The couple met back in 1988 when Jean was working as a part-time bookkeeper for one of Alex’s friends. Alex, who’s from Ontario, was 47-years-old at the time, just newly divorced from his first wife, businesswoman Elaine Callei. He had also been hosting Jeopardy! for about four years at that point when he had met Jean, who was only 23-years-old, making for a 24-year age gap.

Alex wrote in his book how interesting the experience of meeting Jean’s father, only two years older his senior, was for the first time since Jean felt the same way about Alex as he did for her, “He was running a private investigation firm in New York, and he had arranged for a boat to host some family and friends for an engagement party. When Jeanie introduced me to him, he took one look at me and said, ‘I guess I won?t be calling you ?son.??”

He had told People Magazine back in 1990, “At first it worried me. But then I thought, ?To hell with it. We?ll make it work.’ ? They were happily married that year in Los Angeles, California, and Alex recalls applying his game show host wit to their vows on their wedding day, “When the minister said, ‘Do you, Alex, take Jean to be your wife?’ I said, ‘The answer is … Yes.’ Leave it to me, always trying to go for a laugh. And I got one. Everybody cracked up.”

The happy couple found out they were pregnant with their oldest three weeks after. Their oldest son Matthew is a 29-year-old who owns a New York Restaurant, and his younger sister Emily is a 26-year-old who works in real estate.

Even before he was diagnosed, Alex told People Magazine in 2018 that, “he wished he’d had a long life with Jean,” but has recently mentioned how he will no longer pursue cancer treatment if his current immunotherapy treatment is not effective. You can tell how much he really sees her as his rock through everything, especially this cancer battle.

He shared a quote from the couple’s favorite movie, Wuthering Heights, in his book, mentioning how he looks at it daily in his home office, ?I?ve got [a] framed image. Jeanie gave it to me. It?s a line from our favorite movie, Wuthering Heights: ‘Whatever our souls are made of, yours and mine are the same.’ That?s the way I look at our relationship. We are one soul in two bodies.?