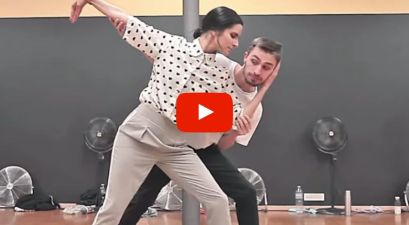 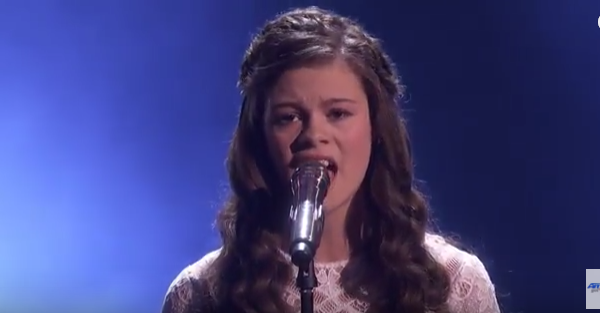 What is it with Simon and Mel B.? Some sort of weird love/hate thing? They got on each others nerves again this week, and really, it’s getting kind of annoying/awkward because it takes away from at acts — which were, well, fairly uneven this week. There were no technical difficulties like last week, but there were several acts that left judges Heidi Klum, Simon Cowell, Howie Mandel and Mel. B flat. Was this the live show that leaves America feeling the same way? We’ll see with the voting.

They are teachers, police officers and beauticians, and since they come from all over the country, they rehearse online. We heard them do the  gospel classic, This Little Light of Mine, and they took us all to church. For the live show, Greater Works  did, from Grease, “You’re the One that I Want,” and it was a raucous way to open the show,  b because they got the crowd and judges on their feet. They are a powerhouse. “That was electrifying,” Mel B. screamed. We’ll see if America agrees.

When we first saw the sibling salsa duo, they performed a spicy number with so many spins it felt like the room was moving. So, of course, they did a number with even more spins during their second appearance, and my head hurt just from watching this.For the live show, the tremendous salsa dancers showed that if they don’t win this competition, they have a future on  Dancing with the Stars.

Music is all they do, because they want to chase their dream. So the guys from Atlanta did It’s a Man’s World, Somewhere Only We Know which fell a little flat.  So did their version of Ed Sheeran’s Shape of You, which got a lukewarm response for judges. That tends to be the kiss of death.

Hernandez, a big guy, wanted to be an entertainer, but his father pushed him into sports. He tried to satisfy him by trying to play football, but that wasn’t his passion. So the first time we saw Oscar, he broke out some wild dance moves to Anaconda, and the crowd went wild. He then did “Bang, Bang,” and once again, he jumped, split and moved like a nimble ballerina. For the live show, the big man strutted his stuff again, and it’s hard to believe a guy that big is that smooth. Even Simon was standing and clapping.

The 13-year-old singer has been tormented by the pain of a father who left and never came back. She told the tale of her mother calling homeless shelters in case they needed a place to stay, and in her first performance she belted out I’ll Stand by You by The Pretenders for her mom. She got a Golden Buzzer, so she moved through to the live rounds. She did ….. and from the first note she had the crowd cheering. There are tremendous singers left in this performance, but her range and tone is special, even though she was clearly nervous. “You just have an amazing voice,” Simon said, and that’s the best way to put it.

Magic done right is amazing. The best tricks start with a simple premise that contains a twist that blows away the audience. That’s what Colin Cloud did in his initial appearance. He took a simple premise — a coin trick — and turned it on its head.  During the live show, he promised his most impressive performance yet. It was long winded and confusing, and you have to see it to see if you like it.

Young sings in the subways of New York. That’s not where he started — he worked at the parks department on Coney Island, but he quit his job and now, for the last 37 years, he’s made his living singing down below. We’ve sen him do Unchained Melody, and, it was A Change is Gonna Come by Sam Cooke.  For the live show, it was another Ed Sheeran song (he’s a popular guy) doing “Thinking Out Loud,” and he did everything that got his this far — a powerful voice that was sometimes off key, always raw, and generally strong. The judges stood again. So did the crowd. Heidi said it was his best performance, and Howie said it was the best performance at this point of the night.

Oskar and Gasper, the story goes, have rarely been seen in public, and are the inspiration for the show. Whatever, their digital art is breathtaking. Whether it’s transforming Heidi Klum into all sorts of things using lights, flashes, and all sorts of cool stuff,  or having two of their troupe on stage with  lights flashing on their body, the originality is tremendous. Heidi though the pace was a little slow, and negative comments can influence the vote. We’ll see.

Sarah and her dog, Hero

How often is it you see Simon the softie? That’s what we saw during the audition round when Sarah and her five-year-dog, Hero, took the stage. When her performance was over — one that featured the shy Sarah in some sort of medevial costume with a sword doing tricks with her dog — only Simon was impressed. During her second performance, Sara and Hero were a TON better. During the live show, she brought another dog along, Loki, and had an Egyptian Pyramid theme.

It’s tough on musicians on these shows. You have to separate yourself and be really original. Chase Goehring, a 21-year-old singer/songwriter from a small town in Tennessee, blew originality out of the water. The guitarist performed a song he wrote, “Hurt,” about a girl in a bad relationship he wishes was with him.  That gave him a Golden Buzzer, and this time, he sang another original song called, Illusion. Give it to him. He’s original. Mel B. called him brilliant but Heidi said it wasn’t her favorite.

Diablo is a very large performance group that does a combination of dance and gymnastics on a moving structure.  That does not go near far enough in describing how amazing the act was. The first time we saw them, the dancers jumped on an arch-looking structure that moved side-to-side, and the dancers took turns dancing and jumping. For their second act, the troupe said in preparation some members suffered some broken bones. The live show was just as crazy, as they danced and pranced inside a large moving wheel.

There are a lot of people to root for in this competition, but you’d be hard pressed to beat Kechi, who has the single most compelling story in the competition. On October 29, 2006, an ADC Airlines plane went down in Abuda, Nigeria. Some 107 people died, and there were just two survivors. One was Kechi Okwuchi, a 16-year-old girl who was coming back from her boarding school.  Now living in Houston, she’s sailed through the competition with renditions of  Ed Sheeran’s instant classic, Thinking out Loud, and then, A Song for You. For the  live show, she was her same terrific, steady, beautiful self, and it may have been her best performance in a series of them. When she was done she broke down crying. “You are an inspiration,” Mel B. said. Clearly.