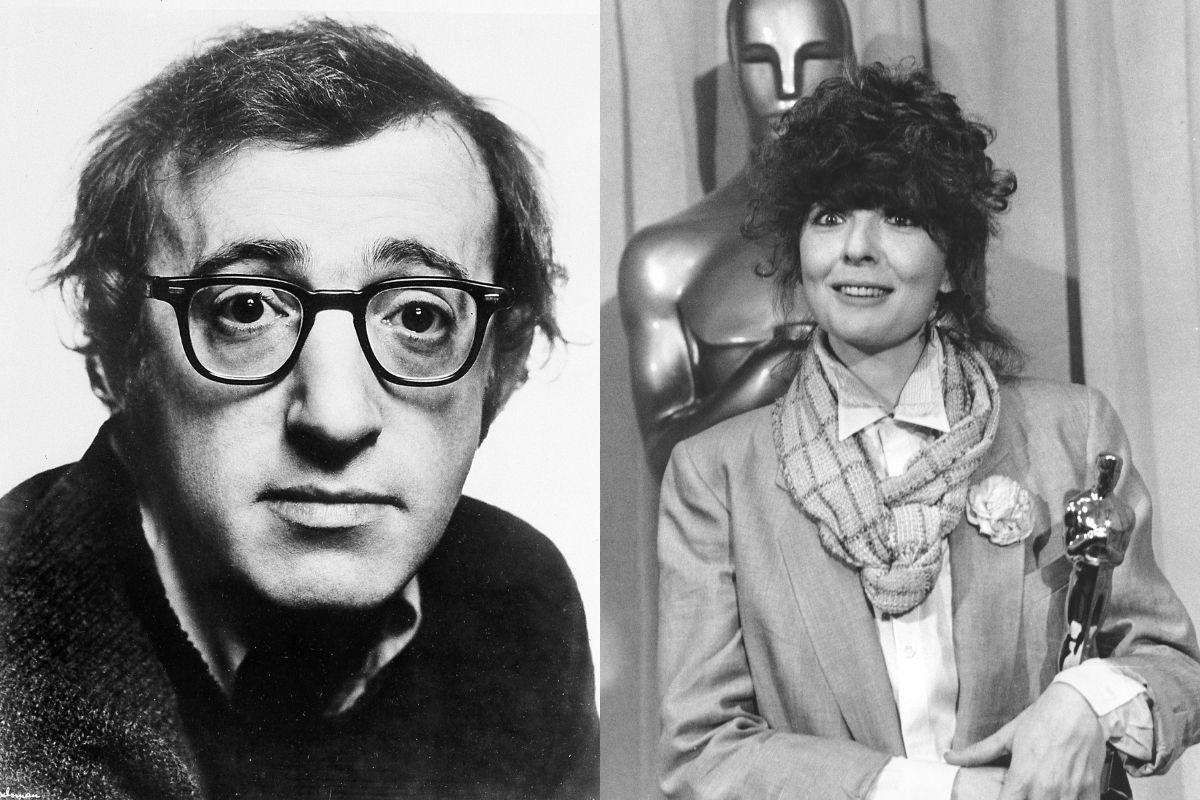 The film was released as Annie Hall, but was initially called ‘Anhedonia’, and followed Alvy’s reflections on lost loves in a more general sense. The Annie Hall plot, however, follows a Jewish young man living in New York who falls in love with Annie, a woman from the midwest. She is a singer who’s trying to make her way in the city. The two fall in love but endure a short-lived romance.

After their breakup, our moody guy tries to figure out why. The film stars Woody Allen, Diane Keaton, Shelley Duvall, Paul Simon, Christopher Walken, and Carol Kane. The cameos in the film range from other A-listers and even a philosopher Marshall McLuhan. Annie Hall was received well and won four Oscar Awards for best screenplay, Best Picture (beating out Star Wars), and Best Actress with Academy Awards on top of that. The film received a Rotten Tomatoes score of 98%. But the film’s adoration still holds up. In just 2015 it was named one of the funniest screenplays by the Writer’s Guild. Every member of the cast has seen a profitable career. Here’s the cast of Annie Hall.

To many people, this is Woody Allen’s greatest film. He had already written and directed 6 films before this one came out.  In it, he starred as Alvy Singer, a neurotic New Yorker born in Brooklyn. The film is said to be a love letter from Allen to Manhattan. It features places he loved, like the Coney Island Thunderbolt rollercoaster. Since the film’s release in the late 90s, he has become hailed as a great filmmaker. The Writers Guild of America named the screenplay for Annie Hall first on its list of the “101 Funniest Screenplays.” And one of the most hardworking, putting out a project nearly every year. His films include Hannah and her Sisters, Midnight in Paris, Blue Jasmine, and an Amazon series, Crisis in Six Scenes.

He has been dubbed as a “treasure of the cinema,” receiving many honors and accolades. He has actually received the most nominations for the Academy Award for Best Original Screenplay, at a whopping 16. He has won four Academy Awards and nine British Academy Film Awards. In 2014, he received the Golden Globe Cecil B. DeMille Award for Lifetime Achievement and a Tony Award for Best Book of a Musical for Bullets over Broadway.

Diane Keaton and Woody Allen worked on many films together. This one is loosely based on a relationship she and the director had. Since then, she’s become one of the most well-known female leads having won an Academy Award, a Bafta Award, two Golden Globe Awards, and the AFI Life Achievement Award.  She went on to win an Academy Award in 1978 for Best Actress for her work in Annie Hall. She also starred in Allen’s Play it Again, Sam, Sleeper, and Love and Death.

After Annie Hall, where she played the lead character, Annie Hall, Keaton was a big star and went on to star in The Godfather and First Wives Club. Other films Keaton starred in were Manhattan, Father of the Bride, The First Wives Club, The Family Stone, Morning Glory, Finding Dory, and Book Club. The actress later went on to adopt her daughter Dexter in 1996 and son Duke in 2001. On motherhood, the actress stated, “Motherhood has completely changed me. It’s just about the most completely humbling experience that I’ve ever had.”

Tony Roberts was well-known before Annie Hall. In the film, he played the total opposite to Allen’s neurotic character. He was cool and was well-liked by women. The charismatic Rob was Alvy Singers’ “I wish I could be like.” In other films, Robert continued to support Allen including, Hannah and Her Sisters, Radio Days, and Stardust Memories. He was also in When Harry Met Sally,  and the remake of Dirty Dancing as Max Kellerman. Some of his Broadway credits include How Now, Murder at Howard Johnson’s, Barefoot in the Park, Promises; Promises, and Cabaret. As far as TV, he went to make special appearances for The Carol Burnett Show, Law & Order, Matlock, and Rosetti and Ryan.

Annie Hall was one of Carol Kane’s first roles. In this romantic comedy, she plays Alvy’s first wife, Allison. Her post-Annie Hall roles include The Princess Bride, The Pacifier, and recently, Hulu’s TV show, The Unbreakable Kimmy Schmidt. She also dabbed in Broadway a little bit, playing the character of Madame Morrible in Wicked, both in the Broadway and regional production from 2005 to 2014. She received a Primetime Emmy Award for Outstanding Lead Actress in a Comedy Series and for Outstanding Supporting Actress in a Comedy, Variety or Music Series for her work in Taxi. Most recently, she appeared as part of the ensemble cast of the Amazon show Hunters, released in 2020, which starred Logan Lerman and Al Pacino.

Simon made a cameo in Annie Hall. His character was Tony Lacey, who hits on Diane Keaton’s character after she sings in a nightclub. Paul Simon, of course, is half of the well-known musical duo Simon & Garfunkel formed with Art Garfunkel in 1956. His career has spanned over six decades, writing hit songs such as Mrs. Robinson, The Sound of Silence, and Bridge Over Troubled Water. Simon has earned 16 Grammy Nominations for his collaborative and solo work, including three for Album of the Year and a Lifetime Achievement Award.

He is a successful two-time inductee into the Rock and Roll Hall of Fame, first in 1990 as part of Simon & Garfunkel and again in 2001 for his solo career. In 2006 Time named him one of the “100 People who Shaped the World.” After that in 2011, Rolling Stone named him one of the 100 greatest guitarists and was ranked eighth in their list of 100 Greatest Songwriters of All Time in 2015.

Pam, a reporter that goes on a date with Alvy set up by their mutual friend, Rob, was portrayed by Shelley Duvall. She was later seen in Stanley Kubrick’s The Shining, Popeye, and multiple other projects by director Robert Altman. She received several awards including a Peabody Award, Emmy Award Nomination a Canes Film Festival Award, and a Bafta Award nomination. Her health seemed to decline after working with Kubrick, however. She hasn’t been acting much recently, save for a 2016 indie film. The most anyone has heard from her was a disconcerting Dr. Phil interview a few years back.
The episode drew a significant amount of criticism from the public with many people suggesting that Duvall’s mental illness was being heavily exploited. In the segment, however, she refused the treatment she was offered. Last year Duvall spoke about The Shining, saying that it took a toll on her physical and mental health filming it. For the bat scene, Duvall said she was forced to go through 127 takes until producers mastered it. Duval stated she considered the experience to be one of “the worst days” of her life.

Colleen Dewhurst has been mostly known for her work in theatre. But, she’s been called the ‘queen of off-broadway’ for her dramatic abilities. She also worked in TV and movies, like A.D, When A Stranger Calls,  and Anne of Green Gables. Annie Hall is the one that she is remembered for most. In it, she plays Annie’s mother, Mrs. Hall. Dewhurst won two Tony Awards and four Emmy Awards for her stage and television work. She was married to James Vickery from 1947 to 1960. She later went on to date George C. Scott whom she and married and divorced twice.

The couple had two sons, Alexander Scott and actor Campbell Scott, who she co-starred with in Dying Young in 1991, which was one of her last performances. Unfortunately, her Christian Science believes letter to refuse any kind of surgical treatment. The actress died of cervical cancer at the age of 67 at her South Salem home in 1991. She was cremated and her ashes were given to friends and family, with no Public Service planned.

Independence Day to Jurassic Park, Wes Anderson’s The Life Aquatic With Steve Zissou. When the sexual allegations against Woody Allen surface, Goldblum is very vocal about the situation. The actor stated, “I think there is a presumption of innocence until proven guilty,” Goldblum said. “I know I enjoyed working with him many years ago and I sat in with his band once, too. Even though I feel like this cultural shift [the Me Too movement] is very, very positive and long overdue and I support it wholeheartedly and take it very seriously, I also admire (Allen’s) body of work. So I would consider working with him, until I learned something more.”

He has since starred in some very high grossing films of his era such as Independence Day, Jurassic Park: The Lost World, Jurassic World: Fallen Kingdom, and Independence Day: Resurgence. He also went on to star in The Fly, The Prince of Egypt, The Grand Budapest Hotel, and Thor: Ragnarok.

Walken played Hall’s creepy brother, Duane Hall. He’s since been on every show, late-night talk shows, and various movies, including Pulp Fiction, The Deer Hunter, The Dead Zone, and Seven Psychopaths. Walkens with creepy yet suddenly amazing at his role. That sentence pretty much describes walk-in in the Woody Allen classic, even though his role is brief but highly memorable.

Obviously, Walken went on to become one of the greatest celebrities of the 21st century, starring and Batman Returns, Pulp Fiction, Vendetta, Sleepy Hollow, Catch Me if You Can, Click, The Jungle Book, the list can go on and on and on. He has received a number of Award nominations including an Academy Award for Best-Supporting Actor and was nominated for a BAFTA and Screen Actors Guild Award for Catch Me If You Can. Fun Fact, the film went on gross more than $1 billion in the U.S. alone! He is also one of Saturday Night Lights’ favorite guest hosts, hosting a total of 7 times so far. One of his most notable roles on the show includes Bruce Dickinson in the ‘More Cowbell Sketch.”

Watch: The Goonies: Where is the Cast Now?