Arnold Schwarzenegger Has 5 Children and Not All With Maria Shriver 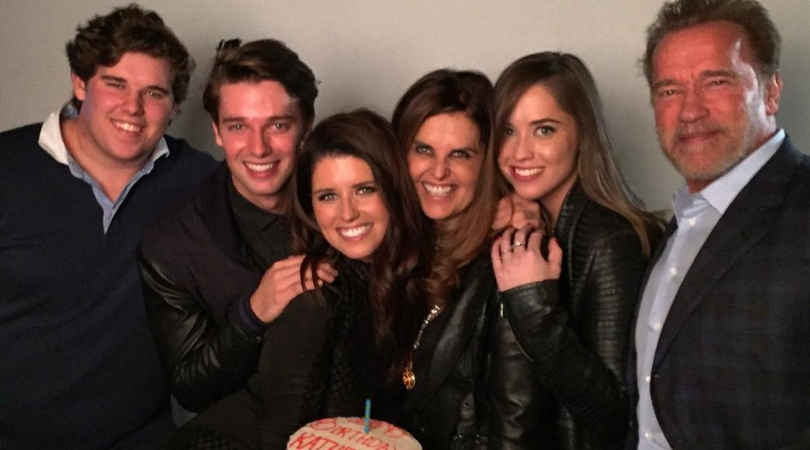 Arnold Schwarzenegger, aka The Terminator, is not only one of the world?s most famous bodybuilders, former governor of California, and a Hollywood actor, but the Austrian native is also the father of five children who have largely lived lives away from the public eye. Thanks to social media, we have been slowly been introduced to Arnold Schwarzenegger?s sons and daughters…all grown up.

Arnold?s ex-wife and the mother of all but one of the children is journalist Maria Shriver. She is the niece of President John F. Kennedy. The couple was together for eight years before getting married and continues to raise their family in a close-knit manner even though they are no longer together.

Arnold and Maria’s oldest child is Katherine Schwarzenegger Pratt. At the age of 19, she wrote a help book called Rock What You?ve Got: Secrets to Loving Your Inner and Outer Beauty from Someone Who?s Been There and Back. She graduated from USC in 2012 and wrote another book called I Just Graduated . . . Now What? in 2014. She is now 31 and married to actor Chris Pratt. The couple welcomed their first child, Lyla, in August 2020. Katherine also does charity work to prevent animal cruelty.

I Just Graduated… Now What?

Arnold Schwarzenegger?s son, Patrick is 25 years old. While he graduated in 2016 from USC with a business degree, he decided to follow in his father’s footsteps and try acting. Patrick, who is a Los Angeles native, has been in several movies, including Grown Ups 2 and Midnight Sun, in which he landed his first leading role opposite star Bella Thorne in 2018. He is also signed with LA Models, through which he plans to do campaigns for Ralph Lauren and Armani. He previously stated he hopes to raise awareness of his clothing company by taking on high-profile modeling jobs.

The second oldest Schwarzenegger is Arnold and Maria’s other daughter, Christina Schwarzenegger, who is 29 years old. Christina graduated from her mother?s alma mater, Georgetown University. In 2018, she co-produced a Netflix documentary about Adderall addiction in the workplace and on college campuses, Take Your Pills. She is now an assistant editor at Gwyneth Paltrow’s lifestyle website, Goop.

The last child the actor shares with his ex-wife Maria Shriver is Christopher Schwarzenegger. Christopher is 23; he graduated from the University of Michigan and tends to keep a low profile. When he was 13, he suffered a major surfing accident while boogie-boarding off the coast of Malibu. He had a collapsed lung, broken bones, and broken ribs. Luckily, his family was there to help him recover.

Last but not least, son Joseph Baena is 23 and is the child of Arnold and his former housekeeper, Mildred Baena; she worked for the family when Shriver and the actor were together. The “love child” graduated from Pepperdine University and does bodybuilding training with his father regularly in hopes of becoming a bodybuilder and winning Mr. Olympia and Mr. Universe titles like Arnold himself.

Editor’s note: This article was originally published on December 6, 2019.