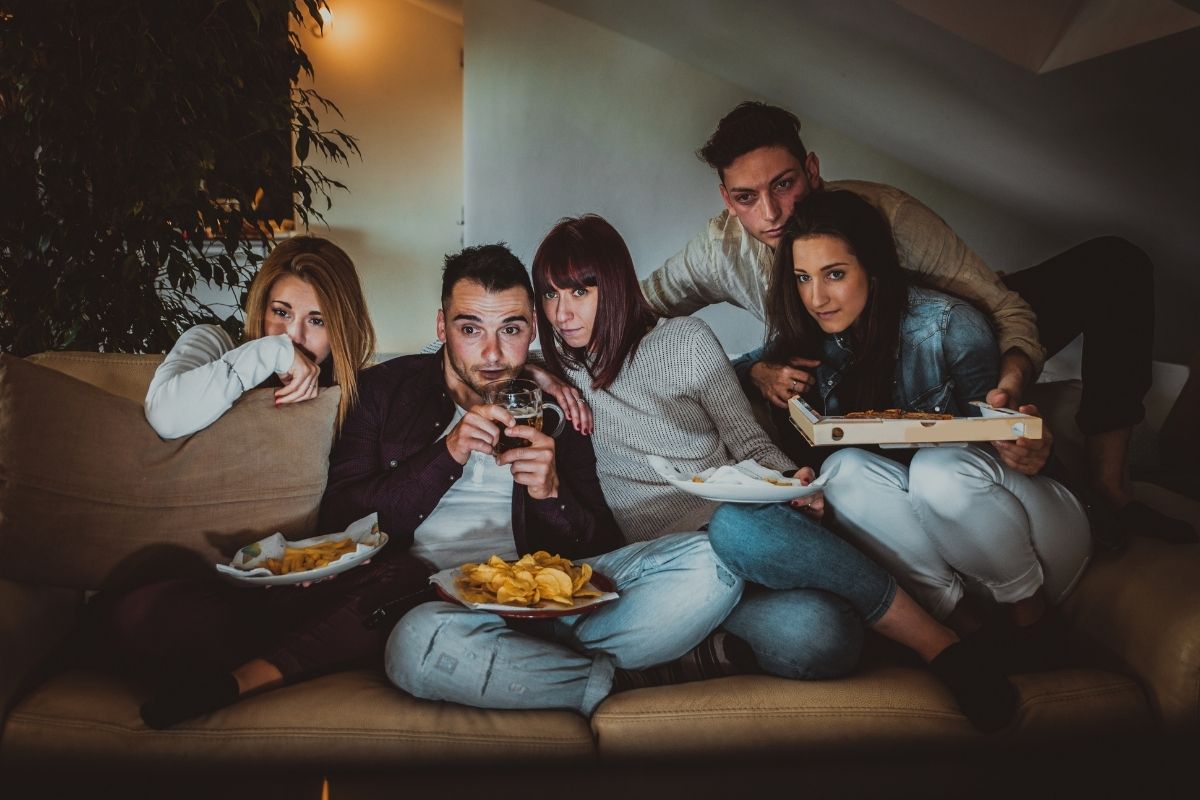 Spooky season is now in full effect, and you know what that means: horror movie fest! If you are anything like me, your weekend consists of Halloween horror movie marathons left and right. I’ll admit it, I’ll spend my whole Saturday cleaning while watching the goriest and scariest horror movie, because what’s better than someone yelling in the background? That being said, it’s hard to find good ones that actually do the trick.

So, to save you some time, I have created a list of some of my favorite horror movies in each streaming platform. Many horror films and TV series are still being added to streaming services through the month of October, so make sure you’re still on the look for those! But, here is what is available on the most popular streaming platforms for the month of October. I’ll also rank them, 1 being the least scary and 10 being the scariest. Keep in mind these are semi-new films because let’s face it, no one can beat those low-budget 90’s cult classic horror movies. Here we go!

By gosh, did this scare the bones out of me. Insidious is easily one of the American best horror movies, especially in 2010 when all other horror movies were making a comeback. This movie is good for you supernatural lovers who love anything to do with spirits and the outside world. The film follows a suburban couple, played by horror movie king Patrick Wilson, and Rose Byrne who move into a haunted house which leads them to invite an exorcist and assistant into their home to get rid of all the demons. Yup, so crazy but so good. Anything from Blumhouse deserves to be on this list.

This one. This is the scary movie that you need to watch if you are into horror movies at all. The Witch, released in 2016 follows a Puritan family living in 1630 New England years before the Salem Witch trials. It’s a very supernatural horror film starring Anya Taylor-Joy, who has been given the title ‘Scream Queen’ for her multiple roles in horror films. It also co-stars Kate Dickie, Harvey Scrimshaw, and Ralph Ineson and more as their characters all encounter forces of evil coming from the woods. The film premiered at the Sundance Film Festival back on January 27, 2015, and has since received positive reviews. If you like The Witch, I also recommend Hereditary!

Meh. Don’t get me wrong, this is a good movie, but I wouldn’t really classify it as horror. It’s more of a ‘jump scare’ and ‘loud noises’ type of film. Still, definitely recommend watching it if you can. Released in 2014, Unfriend will be available starting on October 16. Believe it or not, this sort of hits home now that we have been through this COVID-19 pandemic and everyone has been having Zoom and Skype parties. The film follows a group of teenagers through one of the girl’s laptops where she is seen chatting with friends. The film takes a turn when they then realized that a former friend, who died three the year before, comes back to haunt them. A scary situation to be in.

Like the one above, this psychological thriller is pretty much a hit or miss for me. I remember watching Paranormal Activity in High School and being terrified. Now, watching it in my mid-twenties, I can definitely see I exaggerated. But hey, it’s on this list because it is a pioneer of its genre. Like in The Blair Witch Project, the movie follows their footsteps and uses ‘homemade’ footage to bring the terrifying to life. While the rest of the series may be a lot, it’s definitely a must-watch, especially if you are trying to get into the whole horror scene.

Oh Hush, how you scared me on a personal level. This made me want to have roommates all over again. It’s definitely the most interesting film on this whole list. It follows a mute and deaf author who lives in the middle of the woods, which is already a whole problem in itself and is nowhere near any other soul. Which is why she has to deal with an intruder all by herself. I have to give it to the music peeps on this one because they use sound design to lead up to that fear factor.

There is nothing I hate more than children in horror movies. Why? They scare the bejesus out of me. Which Is why I give Sinister a solid 10! Released in 2012, the film follows a true-crime writer, played by Ethan Hawke, who discovered a box in the attic that contains home movies depicting some very gruesome murders which then ultimately puts his own family in danger. A lot of horror cliches and jump scares throughout!

Runner Ups: The Autopsy of Jane Doe, Gerald’s Game, The Babadook, and The Conjuring.

Parasite took a little bit of my soul. If you haven’t heard about this movie, you seriously have been living under a rock. The foreign film took the award season earlier this year, winning Best Picture at the Oscars. The movie is a parable of class warfare following two families. The Kim family doesn’t have a lot of money but is very creative and is very street smart. The Park family is extremely wealthy, and well, get played by the Kim family. As the two families merge, the relationship becomes more parasitic than anything else.

Like Unfriend, this really isn’t a horror movie scary, rather than a ‘this could actually happen in real life’ type of movie. The entire series of The Purge is said to be coming out on Hulu October 15, 2020, and they are definitely worth watching. The Purge acts on the premises of a one-night-free-for-all when all crimes, which include murder, all legal for 12 hours. With 2020 being the way it is…I can totally see it happen.

I might be a little biased about this one because I love John Krasinski, but this is definitely one of the best horror movies directed in history. A Quiet Place is a post-apocalyptic science fiction horror movie revolving around a family who struggles to survive and raise their children in a world that is inhabited by blind extraterrestrials created with an acute sense of hearing. Need I say more?

This is one of my favorite horror movies of all time. I can watch ti back to back, and still, get scared. I don’t know what it is, but it gives me goosebumps. The film is a remake of the 1979 film of the same name, taking the next step and expanding the full to a full-length horror movie. It follows a teenage girl, portrayed by Camilla Belle, who takes a babysitting job at a home but then gets a call from a stranger. When she tracks the line, it shows it is coming from inside the house. Yikes.

Jessabelle is a wildcard. I found it after losing hope in finding a horror movie to watch on Hulu, and it did not disappoint. The supernatural horror film follows a girl who is basically cursed without her knowing. She is forced to move into her childhood home after a tragic accident left her in a wheelchair. During her time there she encounters several spirits and is put in terrifying situations when she starts learning about her past.

Runner ups: The Quiet Ones, Black Rock, My Bloody Valentine, Cabin in the Woods, The Omen.

A classic sci-fi horror movie! Sigourney Weaver stars as Ellen Ripley, a warrant officer on the spaceship Nostromo. She is then faced with evil aliens and crew members who don’t quite understand the importance of quarantine. To quote their famous tagline, “In space, no one can hear you scream,” and well…they have a point there. The film definitely has served as inspiration for horror movies released today.

Us is a 2019 horror film by brilliant director and filmmaker Jordan Peele. It’s hard to really explain the movie without spoilers, but definitely worth a watch. it’s Jordan Peele we’re talking about here, you know it’s going to be good off the bat. Who can forget his amazing Get Out film?

The infamous Conjuring series had to make an appearance on the horror genre list. Although the first one pretty much terrorized us all, the second one really gave us nightmares. The second movie was released in 2016 and stars our horror favorites, Patrick Wilson and Vera Farmiga as they reprise their roles as Ed and Lorraine Warren. The film follows the couple as they travel to the UK to assist a family who is experiencing poltergeist activity in 1977.

Alright, a lot of you might disagree with me on this one, but this movie scared me to the core! It is based on David F. Sandberg’s short film of the same name and features Lotta Losten. The film is about what you’d expect it to be, the lights being out. As.a child, the main protagonist scared of the dark, her younger brother then begins to expiring unexplained and terrifying events that jeopardize their sanity and safety. That’s when a supernatural entity comes and tries to torment the entire family.

Of course, this list could not be complete without the king himself, Stephen King. The 2019 film is a sequel to the classic The Shining. Ewan McGregor plays a grown-up Danny Torrance, who is a creep with psychic abilities struggling with childhood trauma. Torrance, who is now an adult, must protect a girl with similar powers from a cult known as the True Knot. How pretty are children to extend their lives.

Runner Ups: Signs, Devil, Ready or Not, The Invisible Man

So, there you have it! Looks like October will be busy for a lot of us. Of course, there are more Hollywood horror and slasher movies out there that should be on this list, including The Silence of the Lambs with Anthony Hopkins, Psycho, The Wicker Man, The Cabin in the Woods, The Exorcist, Carrie, Night of the Living Dead, Child’s Play, Suspiria, The Texas Chainsaw Massacre, The Evil Dead, Don’t Look Now, Dracula and so on. But as I stated, these 20th century “new ones” are defiantly worth a watch to change the horror channel a little bit.