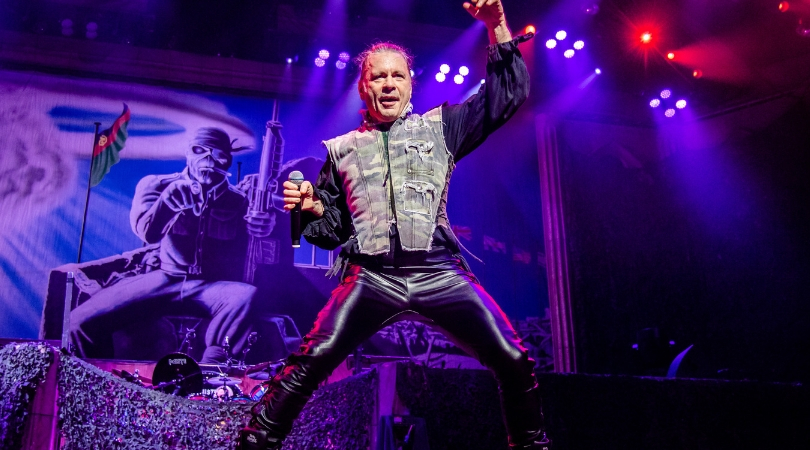 Without having any formal training Bruce Dickinson achieved the impossible. He joined one of the most successful metal acts right before their third album the Number of the Beast and became recognized as one of the most revered frontmen and embarking on countless world tours. Even as a new member, his contributions brought the band well-received singles like “Flight of Icarus” and “2 Minutes to Midnight”. He later even managed to have a solo career complete with a tour and songs for movie soundtracks and charity work.

He even performed in Sarajevo, which was under siege during the Bosnian war. For this, he was named an honorary citizen of the small country. A documentary was filmed to commemorate the concert; it’s called Scream for me Sarajevo. Not many people know about his non-musical pursuits. For starters, outside of his heavy metal band, he’s a fencer. And not casually, either. He is the founder of a fencing equipment company “Duellist”, has competed internationally, and ranks 7th in fencing in Great Britain.

Dickinson is also a pilot. Yes, like a pilot, pilot. He learned to fly planes recreationally during the ’90s, taking lessons in Florida. Now he holds an airline transport pilot’s license. For a while, he was employed as captain of a UK charter airline, Astraeus Airlines, where he flew Boeing 575 planes. The charter is no longer in business, however. After they closed he founded his own aviation company, Cardiff Aviation in 2012. In 2008 he even piloted a Boeing757 for Iron Maiden’s Somewhere Back In Time World Tour to get their gear across the ocean.

#TheAdventuresOfLordIffyBoatrace by #BruceDickinson I've wanted this book for 25 years! Thanks EBay

Bruce Dickinson didn’t stop there, either. He has had his own radio show, Bruce Dickinson’s Friday Rock Show on the BBC radio station. The show ran for almost ten years. In the means of television, Dickinson hosted a historical series on aviation, called flying Heavy Metal on the Discovery Channel. Pun intended I’m sure.

It doesn’t stop there. Dickinson was also a writer. He created The Adventures of Lord Iffy Boatrace, his first book. and the publishing house he approached about it decided to sell it without even reading, based on Iron Maiden’s sales alone. He then wrote a sequel to the book, The Missionary Position. Then he co-wrote the script for Chemical Wedding with Julian Doyle. The film offered Dickinson in a small cameo as well as credited him as the soundtrack composer. Obviously, we wrote his own memoir. What Does This Button Do? was released in 2017.

After having completed every item on his bucket list and maybe five other people as well, Dickinson, also somewhere in there he got married and had some kids. And kinda beat cancer all while formulating a beer recipe for collaboration between Iron Maiden and Robinsons Brewery. Should I just stop there?

Let this inspire you to go out and follow literally every one of your dreams! Or you, know…we could all just sulk that Dickinson got there first- just rock star things, am I right?

Editor’s note: This article was originally published on October 30, 2019.

Watch: Dave Grohl and Kristen Bell Performed a Heavy Metal Version of ?Do You Want to Build a Snowman?? From Disney?s Frozen