Bruce Springsteen and Clarence Clemons Used to Make Out Onstage 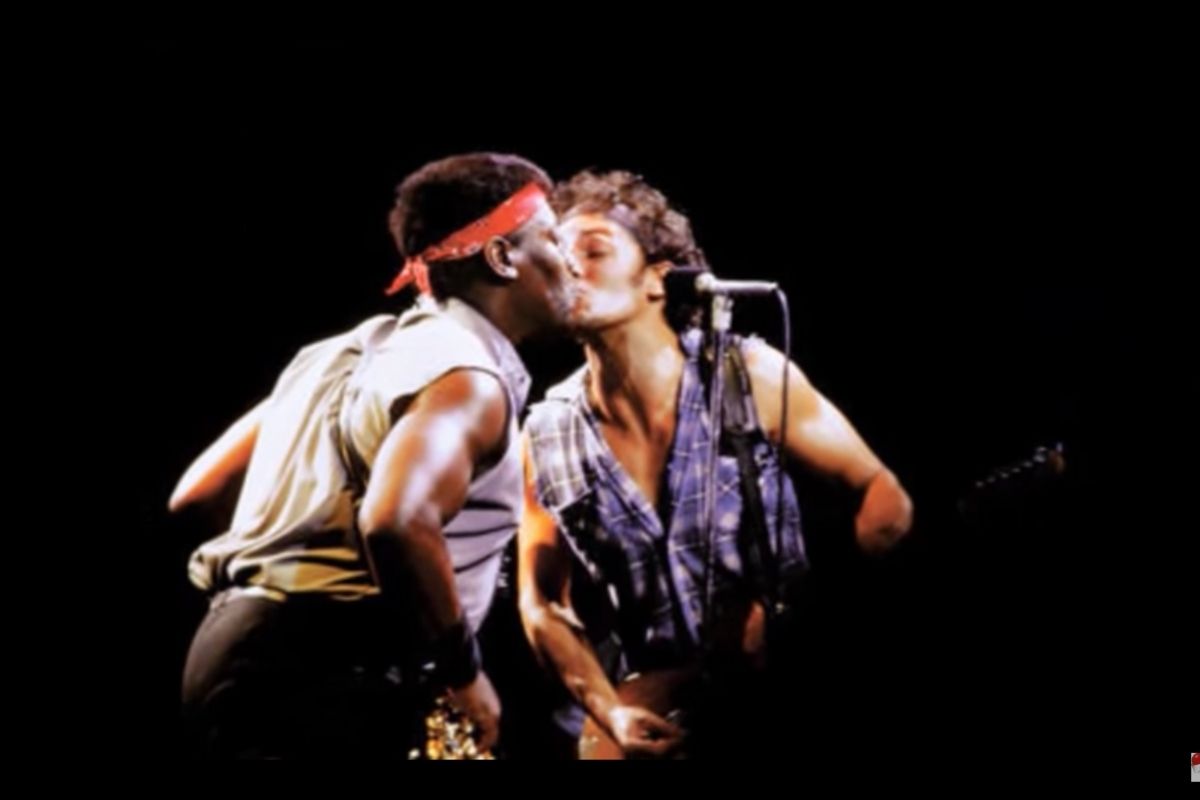 “Bruce used to tell different versions of this story but I’m a Baptist, remember, so this is the truth. A rainy, windy night it was, and when I opened the door the whole thing flew off its hinges and blew away down the street. The band were on-stage, but staring at me framed in the doorway… Bruce and I looked at each other and didn’t say anything, we just knew.

We knew we were the missing links in each other’s lives. He was what I’d been searching for.”

Though the tale is clearly exaggerated, Clemons’ embellishments get at the fundamental connection which these two musicians shared. So when a twitter thread went viral containing photos of Springsteen and Clemons kissing on-stage, die-hard fans of Bruce Springsteen’s E Street Band. It was that musical bond which defined their cheeky, lively brand of rock and roll.

Thread of Bruce and Clarence kissing (they did it at every show).

The E Street Band has been the backing band for singer-songwriter Bruce Springsteen since 1972. Its unique name, which was added in 1975, derives from the street in Belmar, New Jersey, where keyboardist David Sancious’ mother lived. It was Mrs. Sancious who generously allowed the boys to practice in her garage. (Contrary to popular belief, the home is not on the corner of E Street and 10th Avenue, as the song “Tenth Avenue Freeze-Out” led many fans to believe.) The band started to tour with Springsteen following the release of his debut album, Greetings from Asbury Park, N.J. in 1973. Prior to that, Springsteen was relegated to gigs on the Jersey Shore.

The original E Street lineup included a Virginia-native saxophonist Clarence Clemons, bassist Garry Tallent, Danny Federici on accordion, drummer Vini “Mad Dog” Lopez, and David Sancious on keyboard. But over the past four decades, many members have cycled in and out. In 1984, Nils Lofgren replaced Steven Van Zandt on guitar and Bruce Springsteen’s future wife Patti Scialfa was added for extra vocals. She now also plays the guitar. Van Zandt, after completing a respectable mob arc on The Sopranos, has also returned to the band in recent years.

Although the E Street Band is primarily associated with Bruce Springsteen, they are an independent band. Springsteen has found backing form, various other musicians, just as the E Street Band has produced work without the frontman. Clarence Clemons’ popular solo album Hero was released following the success of Springsteen’s Born in the USA. It includes the famous Jackson Browne duet ?You?re a Friend of Mine.? (Clemons also featured on Aretha Franklin’s 1985 hit single, “Freeway of Love.”) The artists went a particularly long hiatus from one another throughout the 1990s though they eventually reunited full-force

The playful performative chemistry between Bruce Springsteen and Clarence Clemons was undeniable. But that energy also channeled into the rockers’ real-life friendship. In his one-man show on Netflix, Springsteen on Broadway, the musician speaks frankly about the wild spirit that Clemons brought to the E Street Band. By Springsteen’s account, it characterized the group entirely. In Springsteen on Broadway, The Boss’s admiration — even infatuation — for The Big Man shines through his monologue.

The GQ article, “This F***ed Me Up: Bruce Springsteen Singing About Clarence Clemons,” Jaya Saxena offers a thoughtful interpretation of their subversive, onstage kissing ritual:

“Springsteen and Clemons came from extremely different backgrounds; one black and one white, one raised Baptist and the other Catholic. Perhaps that what?s that kiss was about every time; not just that two men could kiss, but that a white man and a black man could share that much love for each other.”

When discussing Clemons’ death in the Netflix special, Bruce Springsteen said Clarence Clemons ?was elemental in my life, and losing him was like losing the rain.? The legendary sax man passed away in 2011, at the age of 69, due to complications from a stroke. All state flags in New Jersey were half staff in his honor. After his death, Clemons’ nephew Jake Clemons went on to play saxophone alongside Springsteen and the E Street Band. Clarence Clemons: Who Do I Think I Am?, a documentary about Celmons’ life directed by Nick Mead, was released in 2019.

Following Clemons’ funeral, Bruce Springsteen released the full text of his personal eulogy in Rolling Stone. It is a long and poetic account fo their decades together, entwining their family life on the road. Springsteen really takes note of Clemons’ formidable, even mystic, presence. The conclusion reads:

“Clarence doesn?t leave the E Street Band when he dies. He leaves when we die.

So, I?ll miss my friend, his sax, the force of nature his sound was, his glory, his foolishness, his accomplishments, his face, his hands, his humor, his skin, his noise, his confusion, his power, his peace. But his love and his story, the story that he gave me, that he whispered in my ear, that he allowed me to tell? and that he gave to you? is gonna carry on.”

WATCH: Our 15 Favorite Classic Rock Songs Of All Time