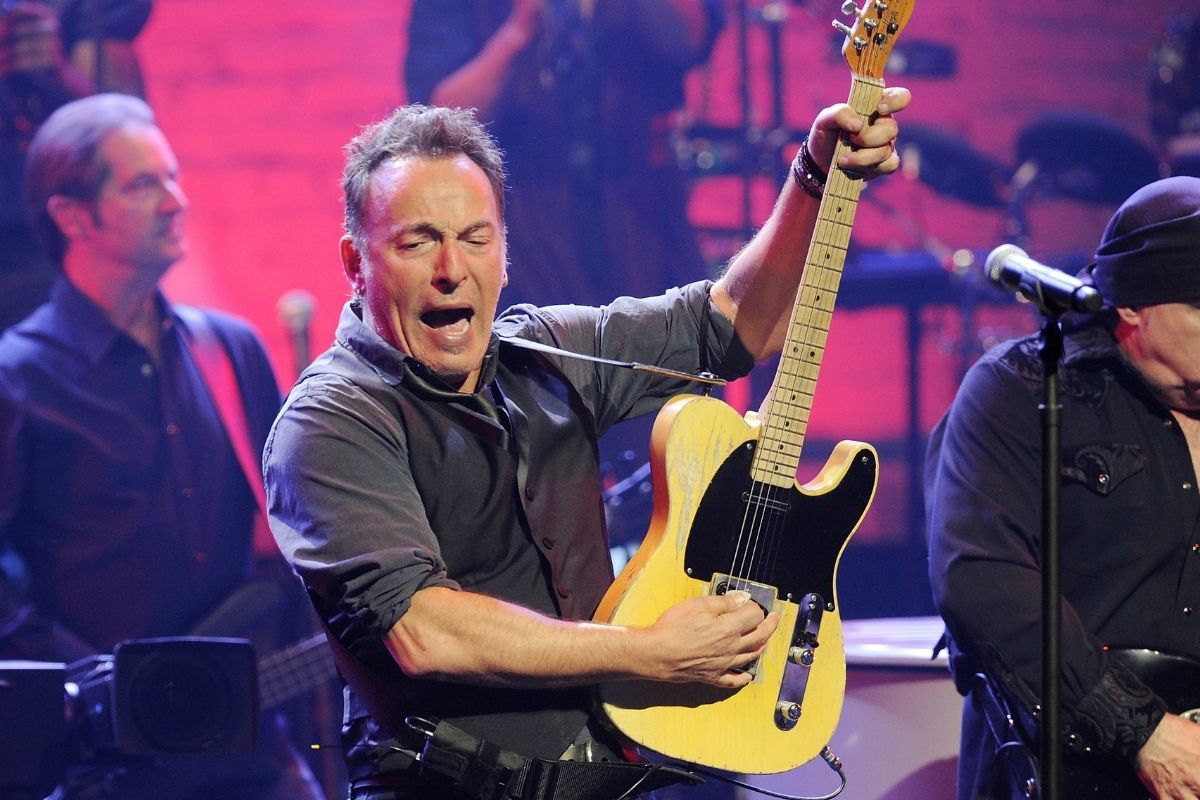 Bruce Springsteen built a carer from himself as a singer and songwriter with the E Street Band. Some of his greatest hits include  “Born to Run,” “Thunder Road,” “Girls in Their Summer Clothes,” “Glory Days,” “Brilliant Disguise,” “Human Touch,” I’m Goin’ Down,” “Pink Cadillac,” “Meeting Across the River,” “The Rising,” “stolen car,” “Sherry Darling,” “Point Blank,” are just a few of his many hits.

The singer from Freehold, New Jersey, had a creative family, including her sister, who acted in The Ghost of Tom Joad, Human Touch, and Lucky Town. He was inspired by The Beatles after seeing them on The Ed Sullivan Show. As soon as he bought his first guitar and began the career that has only skyrocketed since. Here are a few of our favorite Springsteen Songs! What’s your favorite?

From the Wild, the Innocent & the E Street Shuffle album, the one with a theme is redemption. The Incident on 57th Street tells a story, similar to Westside Story or Romeo and Juliet, with two lovers who won’t be. Musically, the song has three verses and three parts. Some review it as a masterpiece.

“Tougher Than The Rest”

Tougher Than The Rest followed “Brilliant Disguise” from the Tunnel of love album. The song was recorded in the artists’ home studio with the E Street Band members. The song is a crowd please, in concerts and has been converted by John Mayer, Cher, and Chris LeDoux.

Inspired by an Animals song, Badlands, on the 1978 Darkness on the Edge of Town album is s storytelling gem. It tells of a character that’s down on his luck and features true E Street Band style. He’s opened with it many times on tour, and it’s never a disappointment. The album also included Racing in the Street. As one of the most successful rockers of the 80s, he garnered a nickname as “The Boss.”

“Dancing in the Dark”

This track with synthesizers gives listening something to listen to, which is why it’s sold over a million singles in the United States. From the 1984 Born to Run album, Dancing in the Dark was the first single and the biggest hit, even becoming Australia’s highest-selling single of the year. Bob Dylan also covered it.

​The last song on Born to Run, has one of Clarence Clemons’s most iconic solos. Critics highly acclaim it’s loved by even John Malkovich. Sesame Street even played a parody of it to lean the youth to good old rock n roll.

A song that almost wasn’t on the Born in the U.S.A. album had it not been for Steven Van Zandt. The song became a hit on the rock charts during the 2004 election and has been covered by multiple artists, including on Glee by late star Cory Monteith. The song was played on his Rising, the Magic, and Reunion tours.

From Born in the U.S., an album including seven other hits, was Born in the U.S.A. In its own way, it’s an anti-Vietnam war song, a protest song. He was inspired by reading Born on the Fourth of July, Ron Kovic’s memoir. In 1981 he created a benefit concert for Vietnam Veterans.

The sixth greatest Bruce Springsteen song of all time, critically and according to Rolling Stone. Other artists have paid homage to it, the Stockton’s Wing Irish’s band named its self after the line, “Slow dancin’ in the dark on the beach at Stockton’s Wing.”

From his fifth the River album, Hungry Heart was the first single. When songwriters Bruce Springsteen and Joey Ramone in Asbury Park in New Jersey, Springsteen was asked to write a The Ramones song. But, instead of giving it to the Ramones, he kept it for himself. On the heels of Blinded by the Light and Because the Night, it was something different. Hungry was deemed Rolling Stones’ best single of the year.

The Wild, the Innocent & the E Street Shuffle was recorded by Bruce Springsteen and the E Street Band in New York in 1973. It sold over 3 million copies featuring hits like New York City Serenade, 4th of July, Asbury Park (Sandy), Rosalita (Come Out Tonight). On the album, Springsteen returned to a more rock n roll sound instead of folk sound on Greetings from Asbury Park.

This song was written for the Philadelphia film concerning the HIV/AIDS issue. The songs were the winner of multiple awards, including the Academy Award for Best Original Song and four Grammy Awards: Song of the Year, Best Rock Song, Best Rock Vocal Performance, Solo, and Best Song Written.

From Darkness on the Edge of Town, tracklist with Prove It All Night, and Badlands, and was also included on The Essential Bruce Springsteen record. The song has been included on many setlists, performed live with Van Zandt guitar solos, and Sax solo by Clarence Clemons. Many people have wondered what Promised land references, some say California, like in Chuck Berry’s song of the same name. In the documentary The Promise: The Making of Darkness On the Edge of Town, Springsteen says it about honoring the place you come from.

From The Wild, the Innocent & the E Street Shuffle. Rosalita (Come out Tonight) is a seven-minute song from a rocker to his forbidden lover whose parents won’t let her. the song is featured on multiple greatest hits albums including The Essential Bruce Springsteen and Bruce Springsteen & The E Street Band Greatest Hits.

Atlantic City is about middle class working people getting pushed out of what we’ve come to be known as the American Dream. The songs first working title was “Fistfull of Dollars”, named after a Clint Eastwood movie. Since its release on the 1982 album Nebraska, it’s become a crowd favorite.

Last but certainly not least, Born to Run is the title track to Bruce Springsteen’s Born to Run album. It represents an underdog’s story and Springsteen’s high hopes during his artist’s struggle. It reached 23 on Billboard Hot 100 and is on the Rolling Stone list of 500 Greatest Songs of All Time.

Watch: How Bruce Springsteen Helped “Bring Down the Berlin Wall” With This Performance