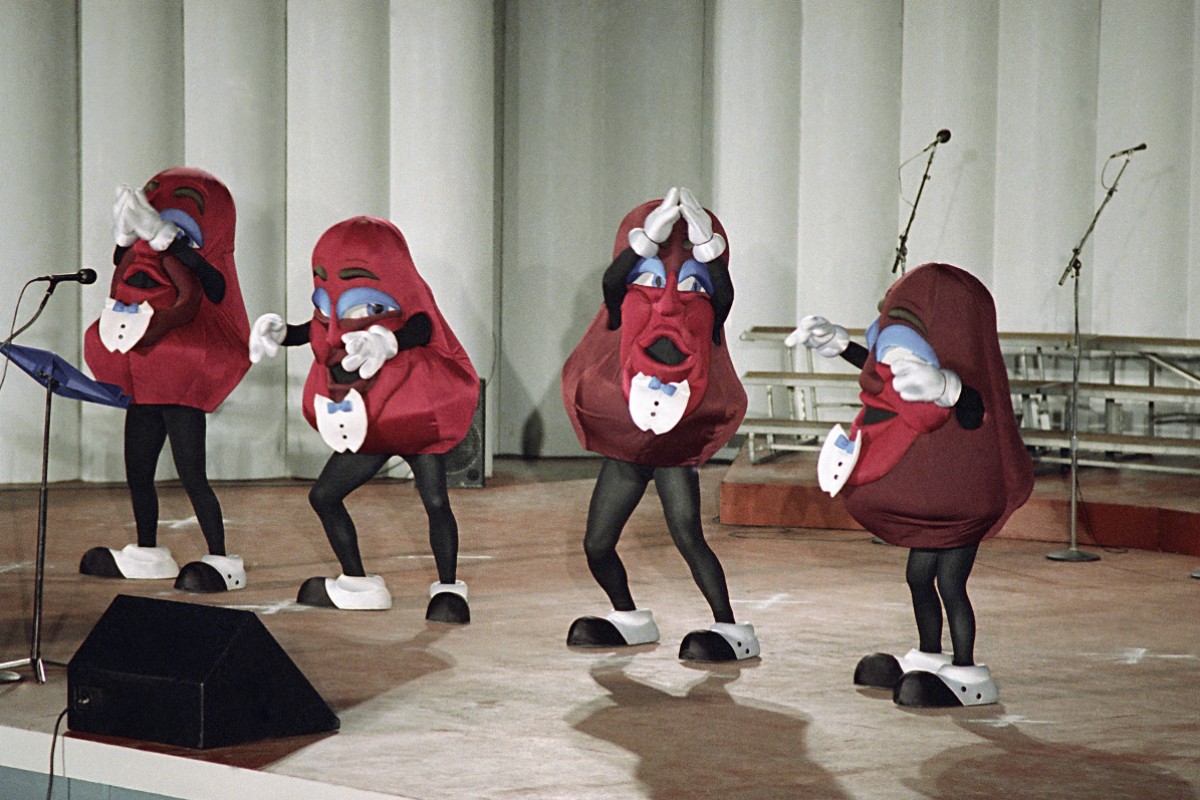 A handful of fictional bands have risen from their status as pop culture oddity to charting icons. For example, The Chipmunks, The Archies, and The Blues Brothers, all scored hit singles in their heyday. Unlike their fictitious contemporaries, however, The California Raisins didn?t emerge from a popular TV show or a movie. Instead, this made-up band of rhythm-and-blues-singing anthropomorphic raisins got their start in a 30-second commercial pushing perhaps one of the least rock-n-roll snacks of all time: raisins.

The Calfornia Raisins story began in the mid-80s when the California Raisin Advisory Board (CALRAB) started looking for a way to make raisins cool again. After several failed attempts, the ad agency struck PR gold in 1986 with a raisin commercial featuring anthropomorphized raisins dancing to Marvin Gaye?s 1968 hit ?I Heard It Through the Grapevine.? They tapped the animators at Oscar-winner Will Vinton?s Vinton Studios to bring these musical snack figures to life in their clay animation department.

The first commercial was wildly popular among the TV-viewing public, as were follow-up ads that featured the dancing raisins. Such was the success of The California Raisins that the president of Priority Records?the same label that would later put out N.W.A., Jay-Z, and Snoop Dogg albums?decided to give the fictional group a real shot at a musical legacy. The label hired musician Buddy Miles, whose both Carlos Santana and Jimi Hendrix collaborations, to produce the music and vocals for the Raisins in a four-album run on the label.

The California Raisins’ Rise to Stardom

The band?s signature ?Grapevine? cover charted the Billboard Hot 100, and its full-length music video received airplay on both MTV and VH1. Two of the albums?featuring the band singing other Motown-era hits like ?Lean on Me” and ?La Bamba”, eventually went platinum. Ray Charles and Michael Jackson would both join the Raisins to sing their own versions of ?Grapevine” in follow-up commercials as claymation versions of themselves. Like any savvy rock-n-roll band, California Raisins also capitalized on their success through merch, producing Raisin lunch boxes, t-shirts, Halloween costumes, collectible figurines, and even a Nintendo video game.

The success of The California Raisins commercials also launched the band into small-screen fame. The band appeared in CBS?s A Claymation Christmas Celebration, a 1987 holiday special that would win an Emmy award. The next year, the Raisins got their own Emmy-nominated special with Meet the Raisins!, a mockumentary that told a fictional story of the band?s rise to stardom, giving each member names for the first time?A.C., Bebop, Stretch, and Red. The group even got their own (short-lived) Saturday morning cartoon show, The California Raisins Show.

Like all rockstars, the Raisins? career was destined to shrivel up like a grape in the sun and by the start of the ?90s, the popularity of the group had largely waned. The final blow came when Internal bickering in the industry and CALRAB?s high production costs led raisin growers and packers to petition successfully for the end of the California Raisins campaign in 1994.

Watch: Paul McCartney and Michael Jackson Had A Feud That Lasted Until Death