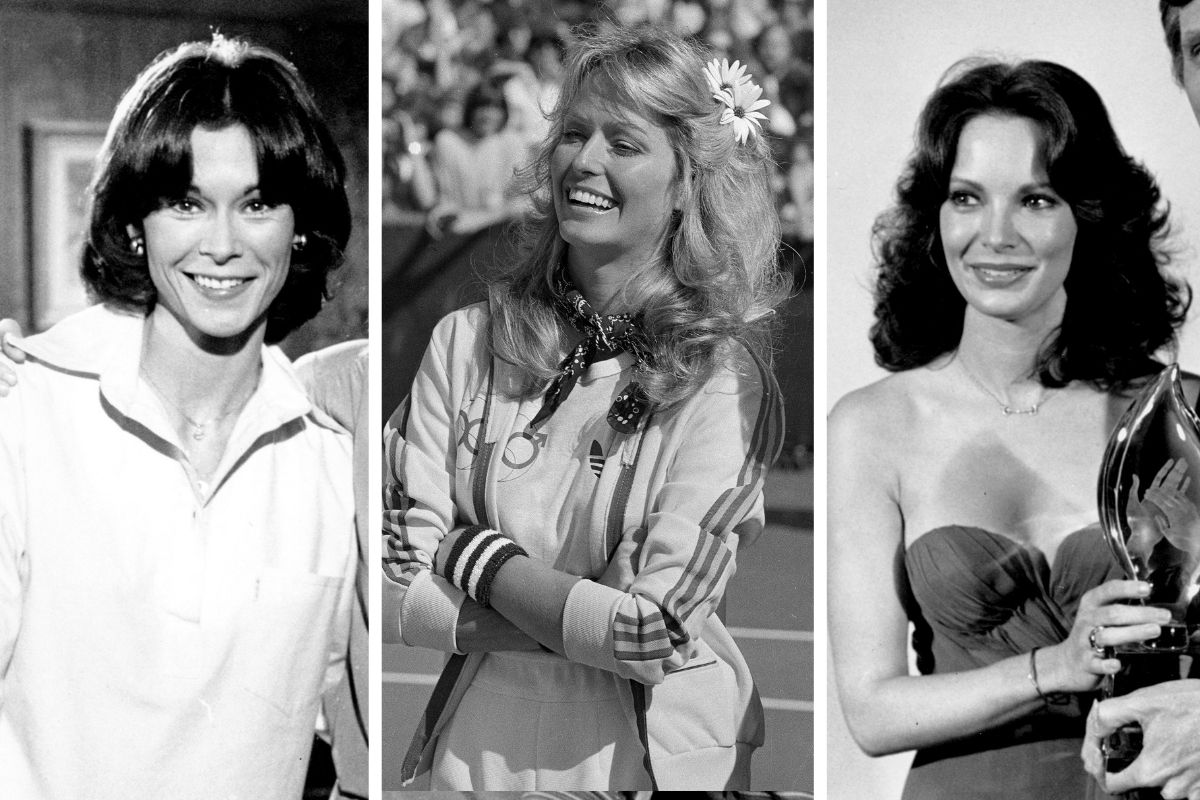 Jaclyn Smith, Farrah Fawcett, and Kate Jackson were the stars of the Charlie’s Angels original series in the 1970s. After the first successful TV show about a female cop, Police Woman it was time to take it to another level. Thus, this show about a trio of trendy and badass private investigators, crime fighters, and private detectives was born.

The girls worked for a man named Charles Townsend whom they never see, but continue to work for at his detective agency, the Townsend agency in Los Angeles. They speak to him only over speakerphone. And, of course with Charlie’s assistant, John Bosley, who they refer to as Bosley.

Jaclyn Smith played angel Kelly Garrett. The actress got her start on a CBS tv movie called Escape from Bogen County in the late 70s. Her first leading role, however, was in The Users, a project of Joyce Haber’s that starred John Forsythe and Tony Curtis. In Angels, Garrett played a Texas orphan who becomes one of the angels. Once Charlie’s Angels reached cancellation, she found work with Robert Mitchum in Nightkill and filmed a television film about Jackie Kennedy.

She furthered her work with Charlie’s Angels in a sequel, released in 1986 called Rage of Angels: The Story Continues, and was the only one to return for Charlie’s Angels: Full Throttle. Going forward, she took a bit of a break from acting and focused on other pursuits. In the ’80s the star founded an apparel line that was sold in KMart. She has been married four times. The first few attempts were to fellow actors Roger Davis and then Dennis Cole. After that, it was filmmaker Tony Richmond and finally Brad Allen, with whom she is still wed.

At the time of Charlie’s Angels, she was known to the world as Farrah Fawcett-Majors because she was married to Lee Majors. In the Angels TV series, she played Jill Munroe from 1967-1977 (later replaced by her “sister”, Kris Munroe). The role of Jill launched Fawcett into stardom. Once she left the show she did return for cameos from time to time.

Following the show, she was in a few made for tv movies that won her both Emmy and Golden Globe nominations. Some of her most notorious work includes The Burning Bed, Small Sacrifices, Spin City, The Guardian, Love Is a Funny Thing, The Cannonball Run, and The Apostle. She had one son, with a former boyfriend Ryan O’Neal. In 2006, Farrah Fawcett was diagnosed with cancer. She died in 2009 at the age of 62, but will always be remembered for those feathered locks and a careless cool-girl attitude.

In seasons 1-3, Angel Sabrina Duncan was played by Kate Jackson. She is followed by Cheryl Ladd, after the third season. Jackson went on to be in another show called Scarecrow and Mrs. King and then started filming Hollywood movies. She starred in Making Love, Empty Cradle, and Quiet Killer. More recently, in 2007, she made an appearance on Criminal Minds. Like her Angels co-star Fawcett, Jackson also dealt with cancer.

She beat breast cancer in the 80s and went on to live and pursue her happiness. She was married a couple of times to Andrew Stevens, David Greenwald, and finally to Tom Hart. She split from all of them but did adopt a son, Charles Taylor Jackson. Jackson has not appeared on television since 2009. She is, however, working on a memoir. It’s been in the works with Gallery Books for some time and is surely, heavily awaited.

Of course, the fabulous ABC television series jumped to a major Sony Pictures franchise. From the small screen to the silver screen; in the early ’00s, Charlie’s Angels saw their first remake.  In 2000 Sony pictures released the first of 3 Charlie’s Angels movies. The first Charlie’s Angels film starred Cameron Diaz as Natalie Cook, Lucy Liu as Alex Munday, Drew Barrymore as Dylan Danders, and Bill Murray as John Bosley. This film was a turn away from the characters in the original series. The film received a budget of $75 million and hit the box office with a stunning gross of $264.1 million.

The success of the first movie allowed Sony Pictures to greenlight a sequel. Charlie’s Angel’s: Full Throttle was the second and final film for this cast, possibly because it cost about 1.5 times more and only brought in a little less than the first. Another remake, however, was on the way, giving the Angels another chance to play on the silver screen. In 2019, the new Angels included Twilight star Kristen Stewart as Sabrina Wilson, Elizabeth Banks as one of the new Bosleys “Boz”, Naomi Scott as Elena Houghlin, and Ella Balinska as Jane Kano. Not to mention, the hint of ‘new’ charlie. A few original series cast members appear in the movie, but, for the most part, a new generation of stars gives the story a new twist.

Watch: Drew Barrymore and Cameron Diaz Have Been Friends for More than 30 Years