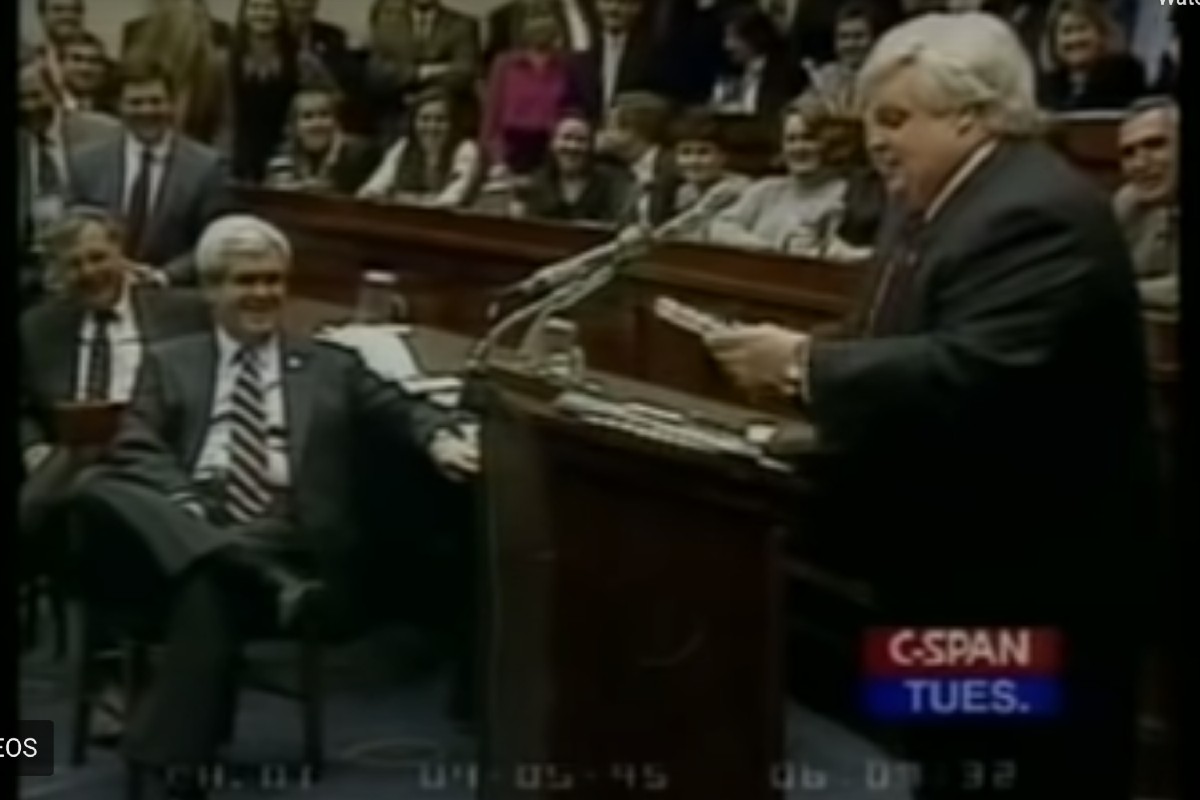 Ah, to be a fly on the wall at the United States House Republican Conference on April 5, 1995. C-SPAN conferences can be notoriously dull, but on that day, anyone who happened to be a fly on the wall (or, you know, just tuning in from home as a human being) would have witnessed comedian Chris Farley impersonate House speaker Newt Gingrich in a surprise visit.

In the C-SPAN clip of the meeting of the House Republican Conference, we watch as the Saturday Night Live legend delivers a last-minute agenda in an uncanny impersonation of the then-Speaker of the House. In case you aren’t familiar with 1995 GOP politics, Newt was Georgia’s 6th congressional district as a Republican from 1979 until his resignation in 1999.

Check it out below, and keep an eye out for the super-young-looking John Boehner.

The clip is one of the many relics we have to remember Farley, who died of a drug overdose on December 18, 1997, at age 33. Before his untimely death, Farley made NBC audiences howl on SNL with skits like the classic “Van by the River” and the “Chippendales Audition”. He famously appeared with David Spade in Tommy Boy and Black Sheep. He also had quite a lengthy film career starring in films such as “Tommy Boy,” “Beverly Hills Ninja,” “Coneheads,” “Billy Madison,” and “Almost Heroes.”

Unfortunately, under the pressure of his newfound stardom, Farley began to abuse drugs and alcohol. His autopsy revealed that he had died of an overdose of cocaine and morphine, which is a combination called “speedball.” His death has been notoriously compared to that of his idol John Belushi who also starred in SNL and died at the same age as him.  His friends would often describe him as “a very sweet guy before midnight”. But those who are close to Farley aren’t sure it was the drugs that got him. Farley was often type-casted in “fat guy” roles, which his friends are certain may have contributed to a decline in self-esteem.

As Farley?s friend Chris Rock remembers: ??Chippendales? was a weird sketch. I always hated it. The joke of it is basically, ?We can?t hire you because you?re fat.?” Rock went on, ?There?s no turn there. There?s no comic twist to it. It?s just f?king mean. A more mentally together Chris Farley wouldn?t have done it, but Chris wanted so much to be liked. That was a weird moment in Chris?s life. As funny as that sketch was, and as many accolades as he got for it, it?s one of the things that killed him. It really is. Something happened right then.? So here’s to Chris Farley, the hilarious-but-ill-fated funnyman who continues to make us giggle at bits like his impersonation of Newt Grinch.

“The Chris Farley Show: A Biography in Three Acts”