Get To Know The ‘Chrisley Knows Best’ Cast 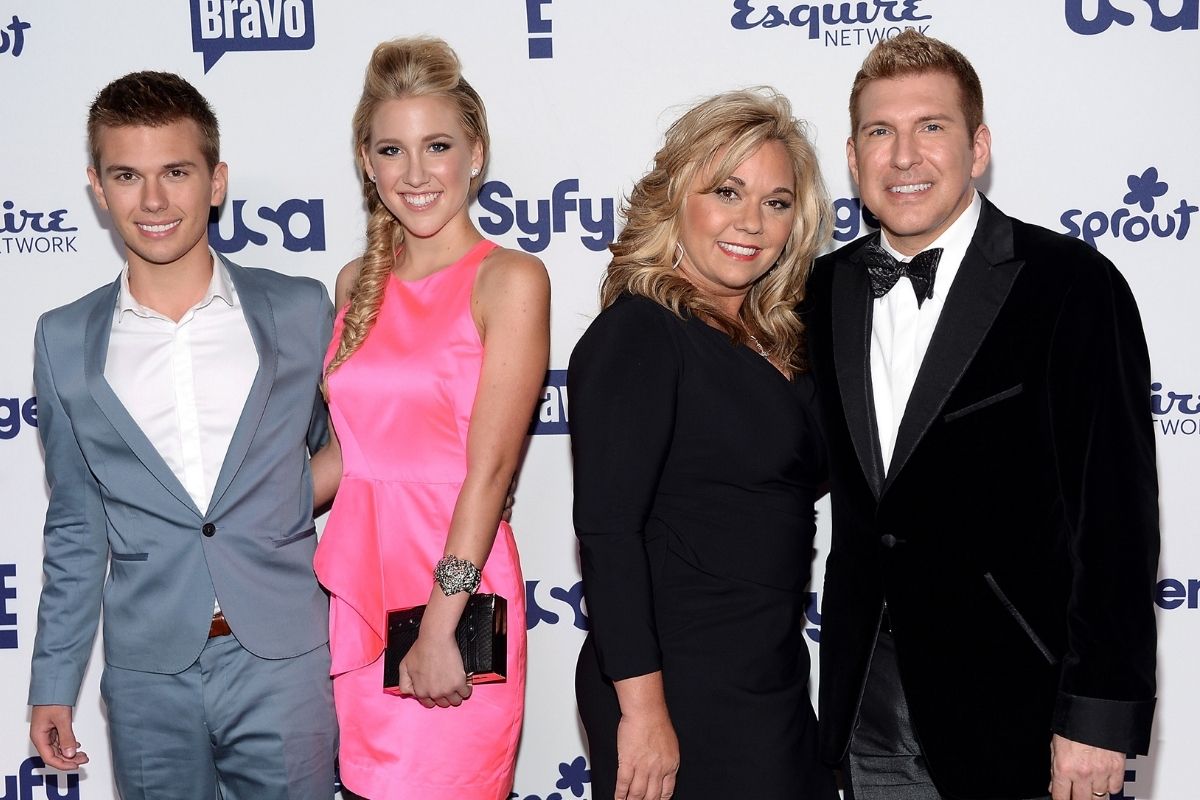 The USA network reality show Chrisley Knows Best brings the life of real estate tycoon Todd Chrisley and his wealthy, dramatic family into homes across America. Like so many reality shows before it, fans have watched with a mixture of fascination and disbelief family members clash, bond, laugh, and end up in one big, addictive soap opera. The Cast of Chrisley Knows Best has changed in all sorts of ways since the show first premiered in 2014 when the family still lived near Atlanta, Georgia; today the show takes place primarily in Nashville, Tennessee.

Who are the Chrisleys and why can?t people get enough of them?

As reported by Country Living, Michael Todd Chrisley, who goes by his middle name, was born April 6, 1969, in Georgia. He met his first wife, Teresa Terry when he was just 21 years old and she was 19. They had two children together, Lindsie and Kyle, and divorced in 1996 amid messy allegations that Todd had physically and verbally abused Teresa, which he denies. Chrisley is now married to his second wife Julie. They had three children together, Chase, Savannah, and Grayson, and have full custody of Todd?s granddaughter, Chloe.

Todd is a self-made millionaire who made his fortune via real estate. However, despite the lavish lifestyle portrayed on Chrisley Knows Best, he has seen his share of financial woes, filing for bankruptcy in 2012 and fending off reports of tax evasion. Regardless, his show is a hit and in August of 2017, Chrisley was rumored to be close to signing a $75 million production deal. Seems people can?t get enough of the family?s antics, many of which revolve around Todd?s dramatic personality, penchant for hypochondria, and willingness to put all the family drama out there for the public.

Julie Chrisley and Todd Chrisley married in 1996. Julie is a former Miss South Carolina, a breast cancer survivor, and co-hosts a podcast, Chrisley Confessions, with her husband. Per Live About she is ?Todd’s counterweight in the Chrisley family dynamics: her calm temperament balances out his fiery personality and her warmth as a “super mom” balances his tough-love approach.? She is also an excellent chef and hosts her own USA Network cooking show, What?s Cooking With Julie Chrisley.

Savannah Chrisley, 23, is Todd and Julie?s daughter. Taking after her mother, she competed in pageants in the early seasons of the show, winning the title of Miss Tennessee Teen USA, before graduating from high school and studying at Lipscomb University, per Distractify. She has an on-again, off-again relationship with her fiance, former hockey player Nic Kerdiles. The two were planning to marry in 2020 but have postponed the wedding indefinitely.

Chase Chrisley, 24, was in high school in the early seasons of the show and was often seen putting together get-rich-quick schemes and dating lots of girls. He has moved on to have his own spin-off with his younger sister Savannah, Growing Up Chrisley, that premiered in 2019 in which ?the brother-sister duo move to Los Angeles to pursue their dreams, they quickly learn through a series of hilarious misadventures that adulting is not without its challenges.?

Lindsie Chrisley Campell is Todd Chrisley and Teresa Terry?s daughter. She hasn?t appeared on the show since 2017 and alleged in 2019 that ?Todd and Chase tried to extort her over the existence of extramarital sex tapes with Bachelor stars Josh Murray and Robby Hayes,? as reported by Distractify. She eloped with her husband, Will Campbell, in 2012 and they have a son, Jackson.

Kyle Chrisley is Todd Chrisley and Teresa Terry?s son. He has struggled with drug and alcohol addiction and has had a strained relationship with his father, and like his sister Lindsie, he no longer appears on the show. Per Distractify, Kyle and Todd reconciled in 2019. He is the father of Chloe Chrisley, who lives full time with Todd and Julie Chrisley.

Grayson Chrisley is Todd and Julie?s youngest son. According to his show biography, he ?is growing into a young man before his parents? eyes and trying to spread his wings ? as much as Todd and Julie let him.? Just seven when the show premiered, he was portrayed as spoiled, per Live About, as he had his own iPhone at age four and was seen stealing his mother?s credit card to go shopping.

Chloe Chrisley is Todd?s granddaughter and Kyle?s daughter with his ex-girlfriend Amber Johnson. According to The List, she?s ?really the beating heart of the quirky Southern clan, as all loyal fans of the show know.? She calls Todd ?papa or dad sometimes? and Julie ?Mimi or mama? and is ?the obvious favorite of everyone on the program.?

Faye Chrisley is Todd?s mother and is primarily known as Nanny Faye. According to her show biography, she ?certainly has a fabulous sense of humor ? along with a delicious rebellious edge? and gets into all sorts of antics in which she?ll ?ride with a motorcycle gang, try new dating methods to find a beau, steal the family car for a joy ride or hit the dance floor.? Nanny Faye was married to Todd?s father, Gene Chrisley, who died of cancer in 2012, as reported by Distractify.

Watch: Where is the Original Cast of ?ER? Now?