Each State’s Favorite Pixar Movie Says Plenty About That State 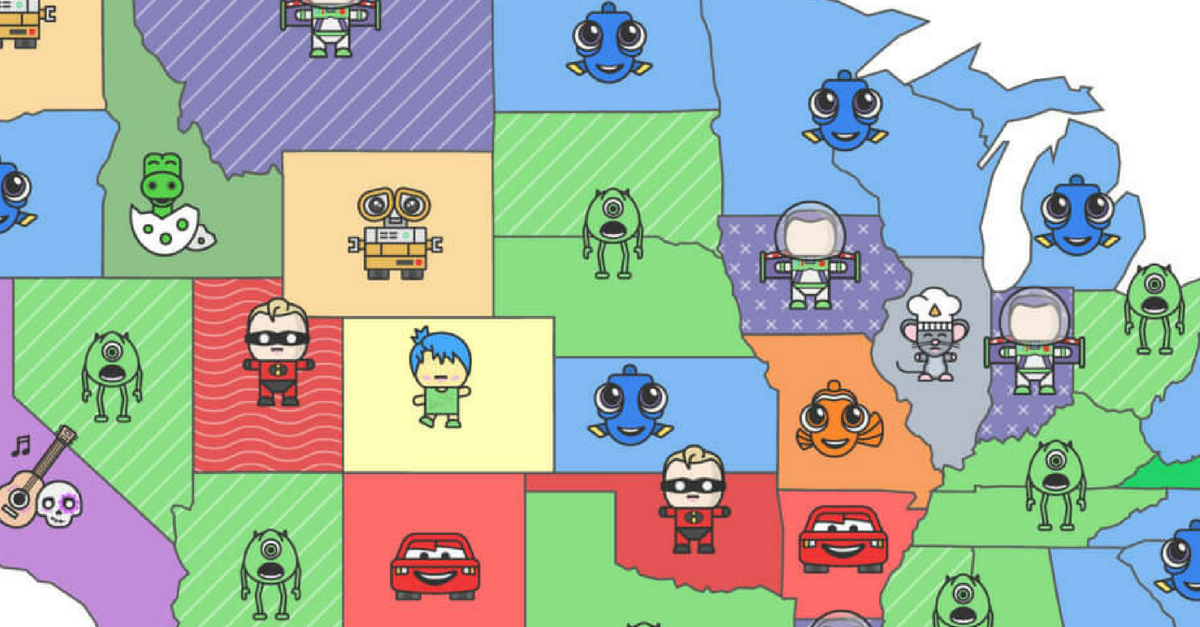 With Pixar releasing The Incredibles 2 on June 15, Cable TV analyzed the Google Trends data for other Pixar movies, to determine the most popular Pixar film in each state.

The Incredibles 2 was the 20th motion picture film released to date, Toy Story being the first released in 1995. Which is why Cable TV decided to divid each movie according to popularity by state, to determine which ones were the fan favorites.

According to the study, Finding Dory was the most popular movie in 17 states, eight times more popular Disney’s Finding Nemo. These states include Massachusetts, Rhode Island, Delaware, Main, Maryland, West Virginia, Pennsylvania, North and South Carolina, Michigan, gloria, Wisconsin, North Dakota, Minnesota, Oregon and Kansas. As for Finding Nemo? Only Missouri and Hawaii seemed to prefer it over Finding Dory. Could it be the wonders of Ellen Degeneres? Fun Fact: Did you know Finding Nemo is the ninth-highest-grossing animated film of all time!

Read More: Why do we love Pixar movies so much? This man explains with one simple question

After surveys, studies showed that movie pairs and sequels were statistically just as popular as their original, if not more. Take for example Toy Story 2, Toy Story 3, and Toy Story 4, those made huge box office numbers, following the first one. The total for all of the franchise? $1,981,437,865! I think it’s safe to say those 90 babies really connected with Buzz and Woody. The original Toy Story came up number one in eight states.

Utah outdid itself with a seven way tie for favorite Pixar movies including Cars 3, Brave, A Bug’s Life, Inside Out, The Incredibles, Monsters Inc, and the most beautiful love story ever Up. Monsters Inc. came up as a fan favorite in eleven states, following with Monsters University.

Of course, after looking a the map, one can see how culture and geographical influences are pretty important when it comes to the films . For example, Coco, inspired by the Mexican Holiday “Dia de los Muertos,” was the favorite Pixar movie in California. Since the release of Coco, it became a fan favorite around the world, winning and Oscar for the Best Animated Movie of year. How does this connect with California? Well, According to the Pew Research Center, California has the largest Hispanic population in America. I guess Californians really like to stick to their culture, huh? Three cheers for Coco!

Another example of culture could be Cars, which came up a favorite in New Mexico. This probably has to do with where the movie was set. Lightning Mcqueen, voiced over by Owen Wilson, passes through Radiator Springs, which is on Route 66, the famous American highway that cuts through New Mexico. Who doesn’t like a movie to connect with their home state?

My personal favorite, Inside Out, which explored emotions and childhood adventures, came up first in Colorado and Vermont. For Washington and Wyoming, WALL-E, a movie exposing a future in where humans have polluted the earth (hello global warming), came up first. Then we have the wonderful Ratatouille, which came up a fan favorite in Chicago.

Do you agree with your state?s favorite Pixar movie? If not, what?s yours?