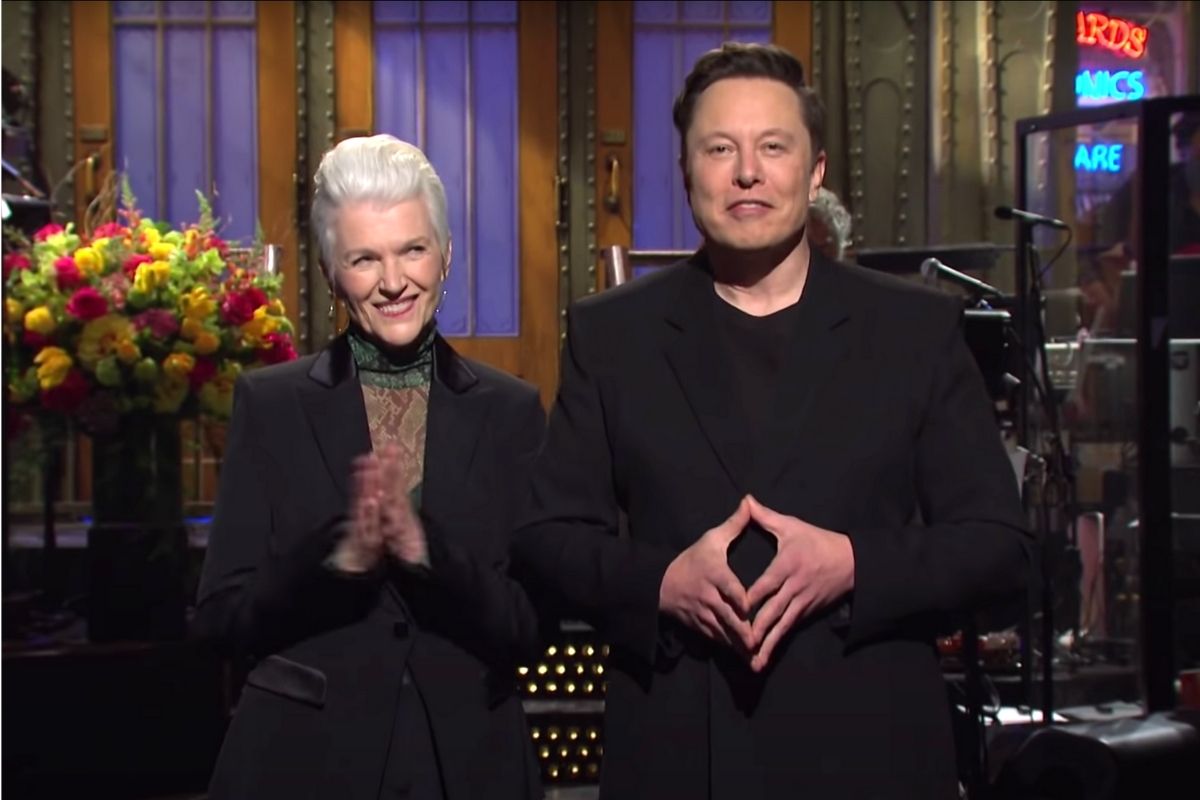 Elon Musk, founder of Tesla and SpaceX and the second richest person in the world, longs to be more than just a billionaire tech bro. He wants to be funny too. Musk consistently “jokes” on his viral Twitter account, makes various comedic cameos (South Park, Rick and Morty, etc.), and has an enduring loyalty to the “doge” meme — hence his encouragement of the Dogecoin cryptocurrency bubble. Still, it was pretty shocking to hear that the non-performer would host Saturday Night Live. Even before the disastrously awkward episode aired, controversy over the decision swirled.

Following the announcement that Elon Musk would host SNL‘s Mother’s Day episode, cast member Aidy Bryant shared a message from Bernie Sanders on her Instagram story calling out the wealth hoarders of our nation. Breakout star Bowen Yang responded to Elon Musk’s trolling tweet, “Let?s find out just how live Saturday Night Live really is ?” saying, “What the f***k does this even mean?” Rookie cast member Andrew Dismukes also shared his distaste for the CEO online, writing, “Only CEO I wanna do sketch with is Cher-E Oteri.” In response, NBC announced that cast members would not be forced to participate though it looks like just about everyone did; Bryant and Dismukes, though, played notably small rolels.

Prior to Saturday, cast member Pete Davidson had spoken up in defense of Musk’s appearance on the show, saying that reports of the in-cast tension were overblown. While on The Breakfast Club podcast, Davidson revealed Musk, members of the cast and Lorne Michaels shared dinner together on Friday night — a tradition abandoned since the start of the pandemic last year. For his part, Davidson seemed quite comfortable working with the Tesla CEO. Still, there was great pressure — and low expectations — surrounding Musk’s May 8 hosting gig.

In lieu of a sketch, the Mother’s Day episode of Saturday Night Live always begins with cast members accompanied by their moms. This time, the act was scored with musical guest Miley Cyrus’ cover of “Light of a Clear Blue Morning” by her own godmother Dolly Parton. It was a cute twist on the predictable holiday tradition. And Miley killed it; her vivid performances were the highlight of a messy show.

Elon Musk kicked off his opening monologue by publicly announcing that he has Asperger’s Syndrome, the generally high functioning form of autism. The personal revelation was meant to dominate headlines… if only he’d been correct in saying that he is the “first-person” with Asperger’s to host the show. Dan Aykroyd, a founding member of Saturday Night Live, has openly discussed his own Asperger’s diagnosis and returned to host the show in 2003.

Then Musk switched gears, from lighthearted jokes about his robotic persona to a direct corporate mission statement. Obviously, Musk wanted to get in front of his past scandals — which include touting an anti-mask stance and threatening union organizers at Tesla — and present his own brand of, well, the future:

“I believe in a renewable energy future. I believe humanity must become a multi-planetary, space-baring civilization. Those seem like exciting goals, don’t they?”

As if that marketing was not direct enough, Musk’s own mother made a surprise SNL appearance, popping up on stage to offer a more charming history of her little boy as a lifelong rocket ship enthusiast. But it probably didn’t help that the pair were both dressed like literal supervillains.

“To anyone I’ve offended, I just want to say I’ve re-invented electric cars and am sending people to Mars on a rocket ship.”

This week’s “Post-Quarantine Conversation” was inoffensive pandemic humor that, being pre-taped, saw Musk acting and reacting much more comfortably with his co-stars.

The Dogefather on ‘Weekend Update’

You’ve heard of Bitcoin, the first major cryptocurrency to make headlines. But what about Dogecoin? The meme-inspired brand of crypto has had quite the year thanks to Musk’s fervent online endorsements. Many fans expected Dogecoin would skyrocket dramatically surrounding Musk’s SNL debut.

But when Lloyd Ostertag, a “financial expert” played by Musk, appeared on Weekend Update to explain, or rather fail to explain, Dogecoin, the world was watching. But as Michael Che and Colin Jost pushed back, grilling the self-described “Dogefather,” Musk closed out the set laughingly admitting that yeah, “it’s a hustle.” And the stock plunged nearly 40% immediately. In the past two days, however, it’s already begun to recover.

dogecoin tanking after elon musk is embarrassing on a terminally unfunny episode of saturday night live. nature is healing.

Considering Elon Musk’s whopping wealth, his defensive monologue in addition to the theatrical framing of the Tesla and SpaceX missions (though this week’s Chad sketch and the objectively awful “Cowboy Standoff”) came off like a crass advertisement. Understandably when performing with a non-performer live on late at night, it’s easier for the real comedians to enter his wheelhouse. Hence, the constant rocket jokes. But as the Dogecoin scare exemplifies real investors, take real stock (no pun intended) in Musk’s personal behavior.

So it’s no surprise that just about everyone had something to say about Saturday night’s show. At the moment, much of Twitter is saturated with hardcore Musk bros celebrating the episode. But published reviews of the TV show have identified Musk’s episode as the groveling low-point of a surprisingly respectable season. Trending headlines include: “The Most Cringey SNL Host in Years,” “A Mediocre Episode of SNL,” and “Elon Musk… with False Asperger’s Claim.”

All these articles saying “Elon Musk, first person to host SNL with asperger’s” forgot about one of SNL’s most famous and brightest stars – Danny Aykroyd.

"'SNL' helped Musk whitewash his horribly irresponsible comments downplaying the risks of Covid-19 and his insensitive remarks about the transgender community,"
says @DeanObeidallahhttps://t.co/TLorZihtUm