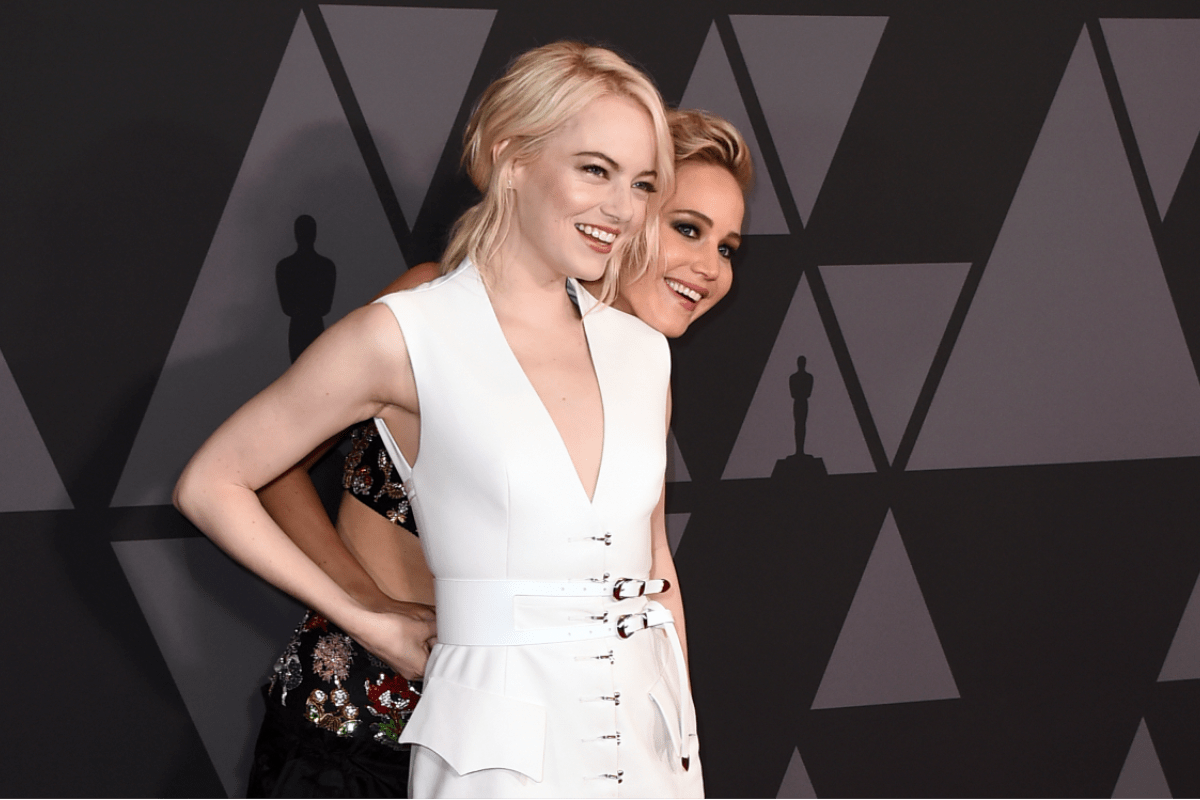 Talented, Oscar-winning, funny, and of course, super pretty. The list of commonalities between Emma Stone and Jennifer Lawrence is a long one. So it makes sense that the two actresses would get along — and they do, adorably. Read on to learn more about the quirky Hollywood friendship between The La La Land and The Hunger Games stars.

Stone and Lawrence have been best friends ever since they got each others’ phone numbers from a mutual friend and co-star, Woody Harrelson. ?She texted me that she got my number from Woody,? Lawrence remembered in an interview with Vanity Fair. “I replied, ‘Fuck off!? And we?ve been really good friends ever since.?

The Oscar winners would go on to message each other every single day for the next year. ?I feel like it was our version of The Notebook — 365 texts,? she added. But the BFFs didn’t actually meet in person, or even talk on the phone, during that entire first year. The pair shared the story of their meeting in an interview with W Magazine for their Best Performances issue, noting that they both had been getting accidental messages from the same random person.

“We both had the same stalker and his name was John the Orchestra Guy,” Lawrence said. “He wasn’t really a stalker he was just this guy that has a lot of people’s phone numbers,” Stone chimed in. “He must have worked at a studio or something. And he texts and he says, ‘Hey, Alex.’ Or he makes up a name. ‘I’m running late on my way to the soundstage. Can you warm up the orchestra for me? Can you text me back and let me know you got this? John.'”

When they finally decided to meet each other in person, they were both worried that they were being catfished by John the Orchestra Guy. “And she thought when I was on the way over, she was like, ‘Oh my God, what if it’s John the Orchestra Guy?'” Laurence remembered. “So then I called you and you were like ‘Hello?’ And I was like ‘Hello?’ Anyway that was the first thing we had in common.”

It was love at first sight. Since their meeting, the friends have been inseparable and appeared everywhere from the red carpet to kicking it with Adele.

In addition to talent and Academy Awards, Lawrence and Stone both share a playful sense of humor. The pair recorded a video together after the 2018 Golden Globes. In the clip, the Cruella star asks The Silver Linings Playbook actress: “What happened tonight?”

J-Law responds, “Well, you had told me that you wanted me to be your date to the afterparties. I got us tickets to some after-parties and booked a car. I was halfway through glam when told me that you didn’t want to go, that you just wanted to come over to my house. So I sent my hair and makeup team home.” Giggling, Lawrence reveals that she is only wearing makeup on half of her face.

In a hilarious interview for Elle back in 2018, we got a chance to see more of the two stars’ sense of humor — in addition to learning some more serious stuff. For the feature, Lawrence interviewed Stone on turning 30 and working on her new project, the Netflix show Maniac. Lawrence kicked off the interview: “You?re so pretty. How?d you get like that?” “What?s the Bridesmaids line you always say?” Stone responded, laughing.

“That you smell like pinecones and you look like Cinderella. Care to comment?” “She says that to me all the time,” Stone informed us. Later on, the interview took a more serious turn. While discussing her upcoming 30th birthday, the two touch on Stone’s struggles with anxiety. “You seem to take something like anxiety or pain and you turn it into something,” said Lawrence. “You take all your, what do you call them, your?,” “Demons?” Stone suggested. “Your demons,” agreed Lawrence. “And you use them for good.”

In addition to Woody Harrelson, the duo shares many of the same friends — including Brie Larson, who befriended the two actresses while filming Room. Brie Larson became close with the tight-knit two amidst her growing fame during her role in Room. As Larson told Vanity Fair,  she often felt “lonely and bad” during the press tour for Room. “‘Emma wrote me this beautiful e-mail out of nowhere, and then one day Jen sent me a text message after she saw Room, and we started talking,” Larson said.

?[Emma and Jen] saved my life,” she continued. I was able to talk with them about everything that was going on in my life, and it was with people who had been through it before and are also hilarious. That support and acceptance was everything.”

Watch: Diane Keaton, Al Pacino, and Other Celeb Exes Who Worked Together After Breaking Up