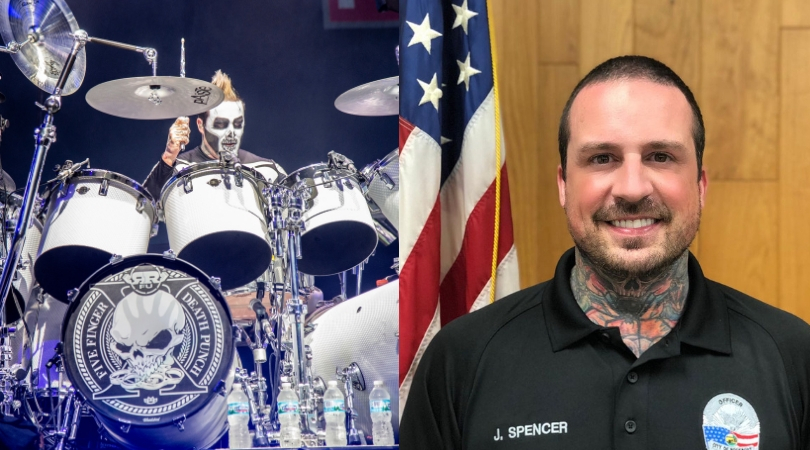 It isn’t uncommon for figures in the public eye to change career paths or disappear completely. This former drummer did something in between the two. He left life on stage to join law enforcement, as a police officer.

Heavy metal band Five Finger Death Punch’s drummer Jeremy Spencer has given up his drum kit to join a police department in southern Indiana. Earlier this year, Spencer returned to Boonville, an Ohio River community that he grew up near. After over a decade in the hard rock group, having joined in 2005 and departed in 2018, he decided he wanted something new.

“I was recently sworn in as a Reserve Police Officer of the Rockport, Indiana Police Department by city Mayor Gay Ann Harney. I’m still a resident of Las Vegas, NV, but It’s an honor to be able to come back to this area when I can and serve the community as a reserve police officer and help out my brothers.”

But as he takes a step back from being the band’s drummer, Jeremy Spencer’s new gig will be somewhat similar to touring, if you will. Not only is he is a part-time police officer in Las Vegas, NV, but he also has multiple gigs. Over this summer he was sworn in as a reserve police officer of the Rockport, Indiana Police Department. The Rockport Police Department is near Spencer’s childhood home. He grew up in the surrounding area until he moved away at nearly twenty.

He is excited to be returning with the purpose of protecting it. In an online statement, he said, “I?m still a resident of Las Vegas, NV, but It?s an honor to be able to come back to this area when I can and serve the community as a reserve police officer and help out my brothers.? He told WFIE-TV that he’d always admired police officer’s hard work, ” “You just see the impact they have on everyone?s life. It?s so important”. Now, he’s taking his turn to be apart of that difference.

He claims that he isn’t retired and that he has projects in the works. So if you live in the Las Vegas, NV area, keep an ear out, maybe you will get lucky enough to see him- on stage, not in your rearview.

This article was originally published on December 31, 2019.