Can You Name All the Celebrities That Guest Starred in ‘Friends’? 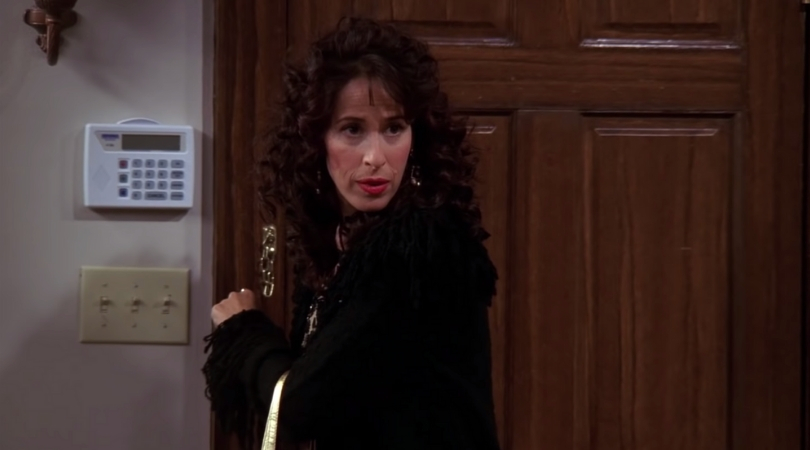 The Friends sitcom is quite possibly the most highly watched shows from the nineties. The shenanigans of Rachel, Joey, Phoebe, Ross, Chandler, and Monica were some of the most “iconic” for an entire decade. And if you were a guest star on the show, you were dang near  TV or Hollywood royalty, or actual royalty.

That being said, did you know Friends had more than 50 guest stars? YES, more than 50!  Which is why we decided to make your life easier, and name them all for you. That’s right. Every. Single. One. Go ahead and grab your popcorn, or chips, or whatever snack you binge tv with, because this, like a season finale, is gonna take a while.

1. Jill Goodacre – “The One with the Blackout”

The Victoria Secret model starred as herself, in the episode where Chandler gets stuck in an ATM vestibule.

2. Mindy “Frau Farbissina” Sterling – “The One with Barry and Mindy’s Wedding”

The epi where the Austin Powers actress plays as the wedding planner for Rachel’s ex-fiance’s wedding.

3. Matthew Ashford – The One with the Soap Opera Party

He plays himself, a soap opera (Days of Our Lives star) and goes to a party with Joey.

Matthew Ashford and Melissa Reeves are scheduled to be at this year’s DAY OF DAYS event on November 9th at Universal Studios in Los Angeles! Don’t miss out!‬ #daysofourlives #dayofdays2019 #matthewashford #melissareeves #jnj

4. Leah Remini – The One with the Birth

Do you remember when Joey helped her give birth??

I had the best time last night on @dancingABC! So good to see so many familiar faces that I love. Thank you so much for having me. And thank you all at home for being so loving and supportive! Your thoughts about how i should judge was right on, focusing on what the non-dancers of the show do right -gets more positive results! Keep dancing! #DWTS #CastFromThePast

5. Donny Osmond – The One Where the Stripper Cries

2019 marks 30 years of my hit "Sacred Emotion"… and I'm experiencing all sorts of emotions after writing that statement (😄😮😳🙃🥴🥳🤯)! This photo was taken on set while filming the #MusicVideo in May of that year. The video was @MichaelBay's first major project out of film school and his start in the industry. By the way Michael, I'm still waiting for those commission checks from The Rock, Armageddon, Pearl Harbor and A Quiet Place. 😆 What are some of your favorite #SacredEmotion memories? #OTD

Another Days of our Lives star comes to Friends! Jennifer plays it *super* cool.

In this one, Monica things a main, Brenda (Arden) is stealing and gets snoopy.

8. David Sutcliffe – The One with the Engagement Picture

Rory’s Dad from Gilmore Girls visits the Friends, sans Rory and dates Phobe! His name is Kyle and he hums while he pees, and it…well, I’m sure you know the rest.

Welcome my “daughter” and one of my dear #friends and friend to the kids of St. Jude, Jen to Instagram! 💕

10. Soleil Moon Frye – The One with the Girl Who Hits Joey

Joey is getting lucky….actually he’s getting hurt.

11. Doug Benson – The One Where Ross Moves In

12. Ben Stiller – The One With The Screamer

He’s Rachel’s boyfriend who gets the boot after screaming at Joey and Chandler’s birds (and other people).

13. Dan Castellaneta – The One After the Superbowl: Part 1,”

The Simpsons voice actor plays the zookeeper that helps Ross when Marcel gets a little lost.

That one time that Jay played himself. On his show. But, like, on friends.

15. Alec Baldwin – The One In Massapequa

You know how if someone is too happy it’s a legit reason to not like them? He played that guy. *Spoiler alert*, Phoebe dumps him.

16. Gabrielle Union The One With The Cheap Wedding Dress

Gabrielle guests stars as Kristen Lang who catches the eye of both Ross AND Joey!

17. Young Emily Osment – The One With The Halloween Party

This lucky kiddo gets written a check when Rachel runs out of Halloween candy. #howadultssolveproblems

18. Charlie Sheen – The One With The Chicken Pox

Sheen plays a potential beau for Phoebe named Ryan, who she gives chicken pox to on accident.

19. Mae Whitman – The One Where Rachel Quits

Ross is the cause of a girl scout (Whitman) breaking her leg and since he’s a good guy he helps her sell the rest of her cookies.

20. Jeff Goldblum – The One With The Mugging

Joey attempts to impress a famous actor Leonard Hayes (Goldblum) in an interview, and makes an interesting impression

21. Chris Parnell – The One with Rachel’s Date

Bob, Chandler’s co-worker that can never het his name right/

22. Harry Shearer – The One with the Fake Monica,

He wants to buy Ross’ monkey for his animal fighting ring. Dr. Baldharar

23. Denise Richards – The One with Ross and Monica’s Cousin

Richards plays Ross and Monica’s cousin, who Chandler and Phoebe want to get to know better.

24. Ralph Lauren – The One With Ross’s Teeth

One of Rachel’s coworkers thinks she made out with the designer.

25. John Stamos – The One With The Donor

Chandler’s coworker get invited to dinner by Monica and Chandler, who want him to be a sperm donor.

26. Jennifer Grey – The One With The Evil Orthodontist

From Dirty Dancing to friends, Grey plays a friend/enemy to Rachel. They team up against Barry who has been cheating on each of them with the other.

27. Jane Lynch – The One Where Estelle Dies

As Ellen, a real estate agent who shows Monica and Chandler a house.

28. Sean Penn – The One With The Halloween Party

29. Sarah Ferguson – The One With Ross’s Wedding

A meta one. Joey meets Fergie (The Duchess of York) and takes a video.

30. Danny DeVito – The One Where The Stripper Cries

31. Dakota Fanning – The One With Princess Consuela

Dakota plays the daughter of the couple who own the house Monica and Chandler are looking at.

33. Noah Wyles -The One With Two Parts

Wyle plays a doctor who Rachel and Monica find attractive

34. George Clooney- The One With Two Parts

The ER star along with his costar Noah Wyle are doctors.

Susie Moss is a woman who is is out for revenge on Chandler. She leaves him in a prickly situation for something he did in childhood.

36. Winona Ryder – The One With Rachel’s Big Kiss

37. Bruce Willis- The One Where Ross Meets Elizabeth’s Dad

The father of one of Ross’ students who dates Rachel

38. Freddie Prinze Jr. – The One With The Male Nanny

39. Hugh Laurie- “The One With Ross’s Wedding

Rachel tries to tell her story to the man next to her in a flight. He isb’t having it.

She plays Chandler’s mom who is a writer of romance novels.

41. Helen Hunt- The One with Two Parts

In a crossover effort, Helen is Jamie Buchman, from Mad About You, who thinks Phoebe is her twin siser, Ursula.

Phoebe’s Mike, a blind date that turns into something more.

… As the mother of Chandler and Monica’s adopted twins.

Brad Pitt is Will Colbert. He used to hate Rachel- but only on screen.

49. Selma Blair – The One with Christmas in Tulsa

50. Craig Robinson -The One with Princess Consuela,”

When Phoebe tries to changer her name to Princess Consuela Bananahammock, Robinson is the clerk who has to deal with the insanity.

53. Christine Taylor – The One With The Ultimate Fighting Champion

Bonnie is Ross’ girlfriend who Rachel tricks into shaving her head because she’s petty af.

56. Jennifer Saunders- The One With Ross’s Wedding

Comedian Saunders plays Emily’s stepmother who flirts with Ross after her marries Emily.

57. Jennifer Coolidge- The One With Ross’s Tan

Amanda Buffamonteezi is one of Monica and Phoebe’s old friends. She’s annoying but in a funny way. Or funny in an annoying way. You choose.

58. Jean-Claude Van Damme: The One After the Superbowl

Playing himself filming a movie in New York with Marcel.

59. David Arquette- The One with the Jam

A bridesmaid who Joey hooks up with.

61. Ellen Pompeo- The One Where the Stripper Cries

Missy Goldberg is an old classmate of Ross and Chandler

Carol’s girlfriend, who for sure hates Ross.

Chandler’s on and off girlfriend for the first few seasons. “OH. MY. GOD.”

65. John Lovitz- The One With The Blind Dates

He is Rachel’s blind date in season 9.

67. Greg Kinnear- The One With Ross’s Grant

Dr. Hobart won’t give Ross a grant unless he breaks up with his girlfriend.

68. Rebecca Romijn – The One With The Dirty Girl

69. Elaine Hendrix- The One With The Pediatrician

Ross meets Sally when waiting to see the pediatrician

70. & 71 Robin Williams and Billy Crystal – The One with the Ultimate Fighting Champion

72. Jason Alexander- The One Where Rosita Dies

Congrats for making it this far- we know who the real fans are here! If after all this you’re still craving some Friends, it should still be up on Netflix for a little while longer, go go!