Did You Know Admiral Ackbar From ‘Star Wars’ Was Ugly on Purpose? 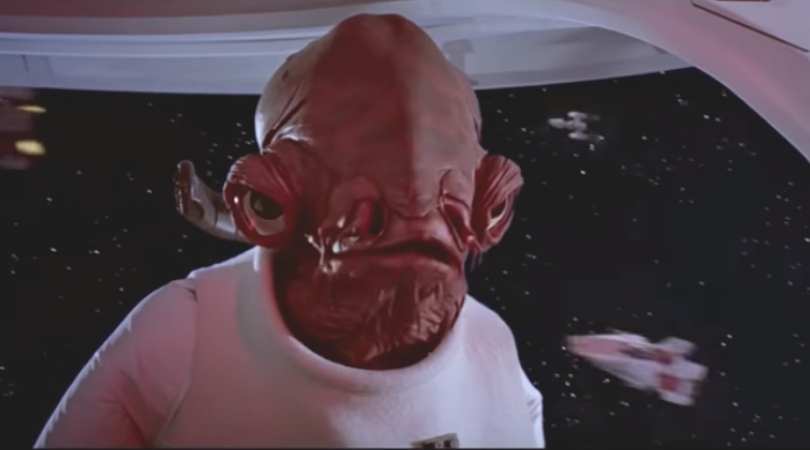 In fantasy or science fiction movies we have grown used to seeing ‘interesting’ looking characters. Hollywood usually has a way of making everyone look sort of shiny and attractive, even if they’re evil. Hence people saying things like “Scar from Lion King is Hot,” or “Omg I know Ted Bundy was a serial killer but he was HOT,” or even “I wanted to see IT, because it’s such a weird sensation to be scared but also be attracted to the clown actor guy because he has such great bone structure”.

These are real things I have heard. However, George Lucas wanted to touch on this point when he made the original trilogy of Star Wars. Specifically in Return of the Jedi. He made a distinct character that was ugly to teach moviegoers a lesson. This character was Gial Ackbar.

If you are somehow completely unfamiliar with the Star Wars/Lucasfilm universes, Gial Ackbar or Admiral Ackbar is the leader of Mon Calamari, a colorful, aquatic world. Ackbar is also the leader of the Rebel Alliance. Voiced by voice actor Erik Bauersfeld, Ackbar is most recognized from Return of the Jedi. In this movie, the Admiral Ackbar had 14 lines including his most famous  “It’s a trap!” during the Battle of Endor where he let the attack against the second Death Star.

Admiral Ackbar is present in many of the original comic strips by Archie Goodwin. In the original scripts for Star Wars: Return of the Jedi, Admiral Ackbar’s appearance was described at first as most human-like, but another draft made him a “pale-blue non-human”. George Lucas was the one who later decided on the character’s final alien form.

In the first sketch of the Ackbar character, he was titled “Calamari man”- possibly a playoff his world, Mon Calamari. Many people working on the movie believed that the Star Wars character was going to be too ugly for the screen. Or worse, become a big joke. The movie’s director, Richard Marquand, stated that having a seemingly “ugly” character was a good idea. This was his logic:

This is a good point, and often something ignored in almost all visual entertainment. That rings true for a majority of this movie as well, the cast portrays many good looking people. From Princess Leia, Han Solo, and the budding Luke Skywalker. It is obvious with characters such a Kylo Ren with more pronounced features not necessarily seen as attractive and Darth Vader with his breathing mask that he’s the “bad guy” as well.

In Star Wars, we see Ackbar as the only character with this type of approach to his appearance. If he isn’t the only one, he’s one of the few. As far as the character becoming a big joke, in the internet age, Admiral Ackbar has become the Star Wars franchise’s’ most meme’d character. Meme’s are definitely big jokes but this can only add to the Star Wars’ legacy.