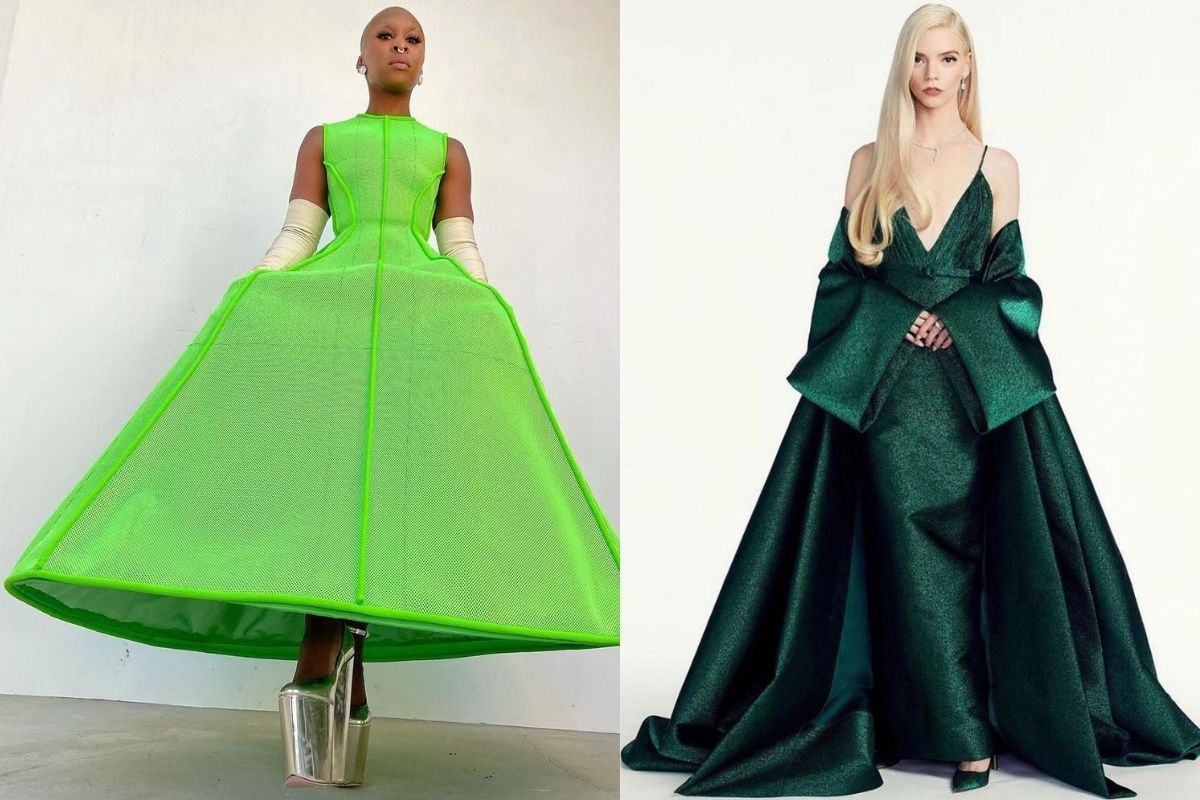 Obviously, this was no normal Golden Globes ceremony. Co-hosts and BFFs Amy Poehler and Tina Fey presented from entirely opposite coasts, their one-liners spliced together live on-air. (Fey was at New York’s Rainbow Room while Poehler presented from The Beverly Hilton hotel in L.A.) Award winners’ speeches were delivered via webcams of varying quality. And perhaps most disappointingly, Giuliana Rancic’s pre-show interviews were conducted from an eerily empty red carpet while nominees sat in their living rooms, visible only from the chest-up. The format left a lot to be desired fashion-wise.

Not everyone stepped up to the black-tie tradition, as wearing haute couture to your own couch might feel a little ridiculous. But it’s where we’re at. So let’s give it up for the actors and actresses who — even through Zoom — still managed to serve looks.

Hosting the bi-coastal 2021 Golden Globe Awards was was a challenge, even for veteran performers Amy Poehler and Tina Fey. Their easy camaraderie and zippy discourse were stunted, obviously, by the state of NBC’s socially distant awards show. But Amy Poehler and Tina Fey are hilarious. And while they are not usually the best-dressed comediennes, their various ensemble changes throughout the night were flattering and even exciting, renewing the sparkly spirit of each round of jokes. And let’s not forget: Fey and Poehler were the only two celebs that actually had to endure the whole night in high heels.

Check out their all-black monologue mini-dresses — a sleek suit design on Tina Fey and a thicker, sequin-laden look for Poehler — in the video above.

Easily a top toot of the night: Cynthia Erivo in Valentino SS21 Couture at the #GoldenGlobes. pic.twitter.com/38fWJY47TC

In neon green Valentino, presenter Cynthia Erivo reminded us what the future of Hollywood fashion could have looked like — had the decade not kicked off with sweatpants and loungewear. Seriously futuristic, Erivo’s hoop-skirt made an impression like a crash-landed UFO, its structure alone re-enforcing a socially distant radius. Fittingly, the dress was accessorizing with a send-off on white latex gloves. And then were the unbelievably sky-high silver heels, looking a cos-play crossover between moon boots and girly pumps. Bridging outer space and pandemic fantasy, Cynthia Erivo was certainly the night’s in-person standout.

Thank you to @Dior for my fantastic @goldenglobes look. So thrilled for everyone @TheCrownNetflix and so honoured to have been a part.

(and on the right my hot date.)

The unusual bodice of Gillian Anderson’s Dior gown captivated as the actress accepted a Golden Globe for her supporting role as Margaret Thatcher on The Crown. (The Netflix drama swept last night; co-stars Emma Corrin and Josh O?Connor also won for their portrayal of Princess Diana and Prince Charles.) Full-length shots of Anderson, released online, reveal the elegant fan of her champagne-colored skirt. But the deep green bodice, boldly featuring a gothic skull, dominated on television. Anderson, above all, fully embraced the awkward framing of this year’s Globes by choosing a dress with the most impressive neckline.

Last year, Jane Fonda swore that she’d never buy new clothes again. The environmentally conscious actress now abstains from the destructive cycle of designer fashion. And no doubt after a fabulous lifetime in Hollywood, she’s racked up enough designer fits to fill a small museum. So when Fonda, 83, walked on stage last night to accept her Cecil B. DeMille lifetime achievement award, she donned a — presumably vintage — simple white suit, paired elegantly with silver kitten heels and distinctive drop earrings. It was a graceful look for the grey-haired star, who spent most of her impassioned speech praising the diversity of various nominees while calling for further action.

Still donning the laser-cut bob which defined I Care A Lot, winner Rosamund Pike wowed last night in an ultra-fem, poppy-red tulle explosion designed by Molly Goddard. The massive show of the tutu dress was offset by Pike’s sharp hair, bare face, and bad-ass black combat boots. Explaining the smart look to Rachel Lindsay on Extra, Pike said: “You?ve got to express what it feels like to be all dressed up with nowhere to go.”

This was Anya Taylor-Joy’s year. As the star of both The Queen’s Gambit and Emma, she was nominated for two separate Golden Globes: one for film and one for TV. Ultimately, she won for The Queen’s Gambit. (Well-deserved.) And as she spoke, it was hard not to stare at the glorious side part dividing Taylor-Joy’s waterfall of blonde hair. The sleek blonde ‘do framed her emerald green Dior dress nicely, a two-piece ensemble pared down to the slimmer silhouette for Taylor-Joy’s personal acceptance speech.

This suit was all I needed tonight. Thank you to Pierpaolo and the incredible team at @MaisonValentino for letting me be the first to wear your Men’s Haute Couture. And CONGRATS DEAR CATHERINE!
📷: @lewismirrett
styling: @ecduzit
hair: @anasorys
makeup: @luckymakeup
💫: @cartier pic.twitter.com/s8OY9wqBOR

After sweeping at the Emmys, Dan Levy knew he had to step up for the Golden Globes; his hit show Schitt’s Creek was a shoo-in to win Best Comedy. And in a chartreuse set by Valentino, Levy set himself apart as the only guy to make our best-dressed list. The funky suit was a joyous choice that managed to pop, even though the Globes’ multiple-screen medium. And let’s not forget those awesome metallic creepers, which can only be described as confidently comfy.

Other leading men, however, chose to take the easy way out. Jeff Daniels, I’m looking at you — yes, you, in your dad flannel! Come on, man.

Julia Garner is nominated tonight for Best Supporting Actress in a Series at the #GoldenGlobes pic.twitter.com/LeVyUbmtnn

Elle Fanning was a frosty beaut in this silky Gucci gown. But traipsing in the hues of icy blue, hues It didn’t take long for social media to make comparisons to Elsa from Frozen — and there is a clear resemblance. But also, Fanning made this look all her own. As the lead actress in The Great, Fanning has subtly transformed from a teen star into serious adult talent. And last night, she looked the part. The cold coloring also evoked Grace Kelly’s gorgeous Oscars dress in 1955.

Tiffany Haddish is killing it with this look. It’s amazing how that right hairstyle can reveal the essence of a woman. pic.twitter.com/7R6dw5NKSC

Following her breakout role in Girls’ Trip, Tiffany Haddish famously wore her beloved white Alexander McQueen gown many times. For $4,000 she was going to get her money’s worth! But Haddish’s glittering, statuesque look last night demonstrates just how far the presenter’s style has come. With her hair cropped and bleached, Haddish’s custom strapless gown by Alberta Ferretti commanded attention through highly reflective brown-and-silver detailing. It was an extreme piece that certainly got me noticing the Best Animation category.

The United States vs. Billie Holiday premiered on Hulu on Friday. And by Sunday night, debut actress Andra Day was a certifiable star. Day has been a noted singer for years, but her turn as Billie Holiday in the new biopic marks her first transition into film. And after impressively clinching a nomination prior to the film’s release date, the newcomer won! And it was such a special moment to witness in real-time: Day, in her glamorous Chanel gown, surrounded by loving, celebratory family members. Of all the at-home displays, Day’s was the one that truly bridged the living room-Hollywood crossover. Centered in a room full of casually dressed loved ones, Day’s huge achievement — and her Chanel dress — shone.

Like her character in Mank, Amanda Seyfried conjured up visions of Old Hollywood in a peachy pink Oscar de la Renta gown, complete with hand-made flower detailing. The dress was specially designed for Seyfried… but almost didn’t make it to the Golden Globes screening. Last week, the designer creation was lost in the mail! Seyfried’s stylist, Elizabeth Stewart, explained that the dress was missing for 36 hours on its way to Savannah. But thankfully, it all came together in the nick of time. A true bloom!

Actress-turned-director Regina King showed off an impressive shoulder cut-out in her metallic Louis Vuitton dress… and a seriously rockin’ physique. The robotic design accentuates King’s sculpted body and was softened by demure makeup and hair. Adorned with Forevermark jewels, the powerful look was on point for the fan-fave nominee.

I'm very happy Sacha Baron Cohen won Best Actor in a musical or comedy for #Borat. But I think how happy Isla Fisher is for him is making me even happier. #GoldenGlobes pic.twitter.com/4crr9zdZxx

Actress Isla Fisher was not nominated for any Golden Globe this year. But she utterly shined as Sacha Baron Cohen’s super supportive spouse. Fisher’s hilarious husband was recognized for his work on both Borat Subsequent Moviefilm and Aaron Sorkin’s The Trial of the Chicago 7. And you just can’t fake enthusiasm that Fisher displayed, beaming, alongside Cohen. Of course, it helped that she looked so eye-catching in a hot pink, tapered gown. It’s a daring look for any red head, and on Fisher, the flaming combo was perfection.