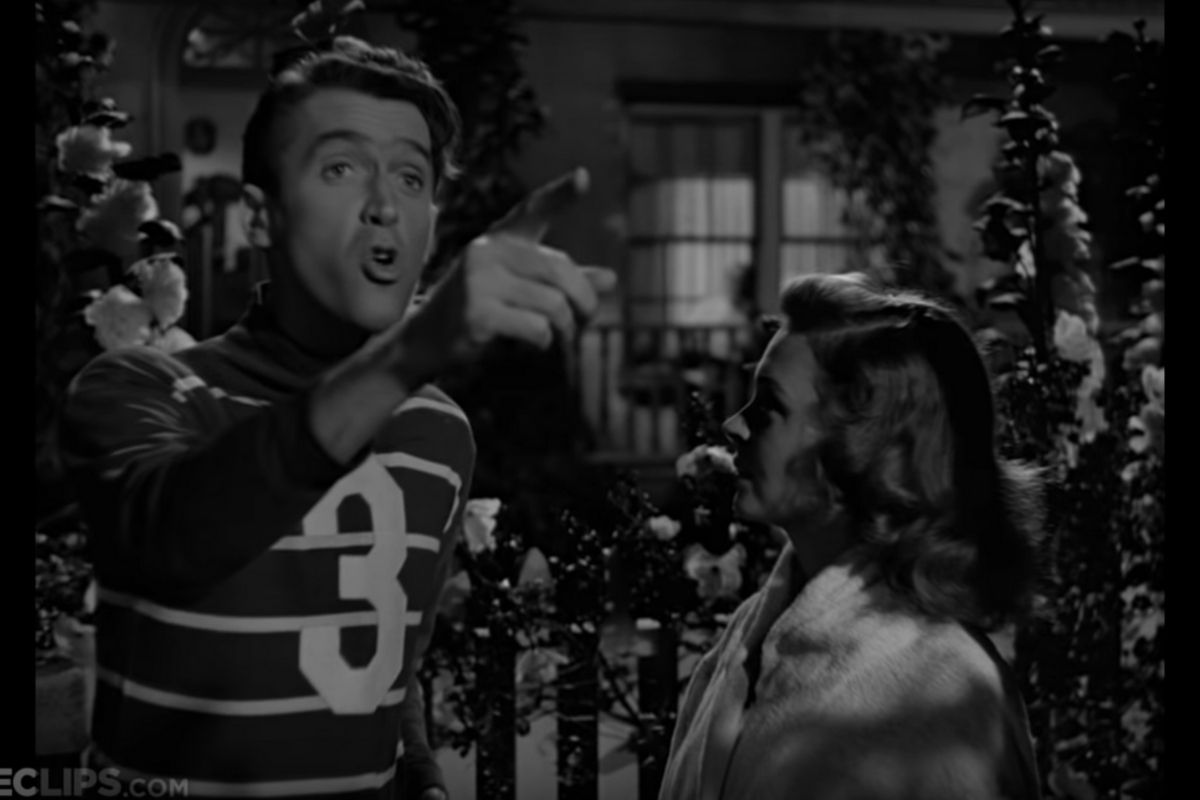 Frank Capra?s holiday masterpiece, It?s a Wonderful Life defines the genre. The film is more than just a Christmas tradition; it?s a shared American experience during an era where ?goodwill to all? can seem like a lost cause. Whenever the world starts to resemble seedy Pottersville, It?s a Wonderful Life feels like a soulful remedy. (I advocate watching it whenever you?re down; not just at Christmas.) With beloved stars like Jimmy Stewart and Donna Reed, each scene shines as a classic Hollywood moment. But one flirtatious interaction between the leads sticks out above the rest: when George Bailey says he?ll lasso the moon.

It?s a Wonderful Life takes place in the fictional Bedford Falls, NY, and follows the full life of local George Bailey: an adventurous spirit who is fiercely loyal to his family and his little town. Told from the perspective of George?s guardian angel, through flashback, audiences witness George grow up from a daring child into a strong young man ready to see the world. George falls in love, has children (including the adorable Zuzu), takes over his father?s business, and witnesses the cutting effects of both the Great Depression and World War II ? but he never does leave Bedford Falls.

The main events of the film take place on Christmas Eve when George, stifled by personal commitments and financial disappointment, threatens to end it all. ?I wish I was never born,? he bemoans while hovering over the edge of a bridge. Enter Clarence: the bumbling angel, second class (AS2). In hopes of earning his wings, Clarence tried to help George see the real beauty in his life. That beauty, of course, radiates from Mary, George?s caring wife whom he courted heartily so many years before. By offering to lasso the moon…

?Just say the word, and I’ll throw a lasso around it and pull it down.?

In a stripey high school sweater, Jimmy Stewart looks especially lanky. Although George Bailey would have been in his early twenties by this point, the wardrobe choice ? a result of falling into the gymnasium swimming pool ? reduces him to a gawky adolescent state when Mary is near. They stroll home, damp, and gravitating closer together. Mary tosses a rock into the old Granville house and makes a secret wish. Then she begins to sing: ?Buffalo gal won?t you come out tonight…? Mary?s favorite song nicely underscores the pair?s easy energy and calls attention to the moon casting its meaningful light on the couple. As soon as Frank Capra?s camera cuts to the leafy sky, that radiant moon becomes a key third player in the scene. (Not counting the eavesdropping neighbor.) A new character for George Bailey to tease.

“I’ll give you the moon, Mary.” George makes his fantastical offer. ?I?ll take it,? Mary says simply. ?Then what?? Here is where George gets excited. ?Well then you could swallow it,? he says, ?and it?ll all dissolve, see, and moonbeams will shoot out of your fingers and your toes and the ends of your hair…? Trying to charm Mary senseless, George ends up talking too much. In reality, he could have gone and on. But It?s a Wonderful Life cuts through the theatrics with an eavesdropping neighbor: ?Why don?t you just kiss her already instead of talking her to death!? Through comedy, the tension is relieved. But the kiss doesn?t come. At least, not yet.

What comes next — the death of George?s father — accelerates our protagonist into the next phase of life. Having to cast aside his and Mary?s childlike shenanigans that night, the notion of George lassoing the moon becomes the last artifact of his youth; one which Mary even recreates artistically. (See above.) And while it?s an infuriatingly tragic ending to such a romantic episode, it leaves space for George and Mary to admit their love later. And with more time having passed, that scene is even more intense than the night that sweet, naïve George pointed up at the moon.

The Legacy of It?s a Wonderful Life

As George Bailey lassoing the moon (or at least offering to) might indicate, It?s a Wonderful Life is a love story. It?s also a spiritual Christmas affair, as the two so often go hand in hand. But beyond the relationship between George and Mary, the classic movie is also a capitalist critique (read: condemnation) that pits good versus evil in a setting that, while the base, is still timeless. Contrasting George Bailey?s ole Building and Loan philosophy against Lionel Barrymore?s ruthless villain, Mr. Potter, who seeks to commercialize Bedford Falls, It?s a Wonderful Life becomes more than just a Christmas movie. With an acute sense of history, it?s no easy Hallmark fare; not even close.

Mr. Potter, like a spindly demon, works his dark magic through loads of dark money, and George Bailey is momentarily tempted to join him. And while he resists the easy pull of greed, the choice is made meaningful by having watched his entire life play out on screen. It?s a Wonderful Life is so immersive, so maximal, that it represents infinitely more than one day a year. As the title suggests, it is a life movie. A movie about our tenuous string of years on this earth, and a movie to revisit again and again throughout those precious decades. That?s why theaters still sell out massively popular holiday showings, and why whole communities will band together in those crummy seats with silver bells and hearts full of hope. We hiss when Mr. Potter rolls on by. And we cheer when Clarence gets his wings. (?Attaboy Clarence!?) And we do tear up, every single time.