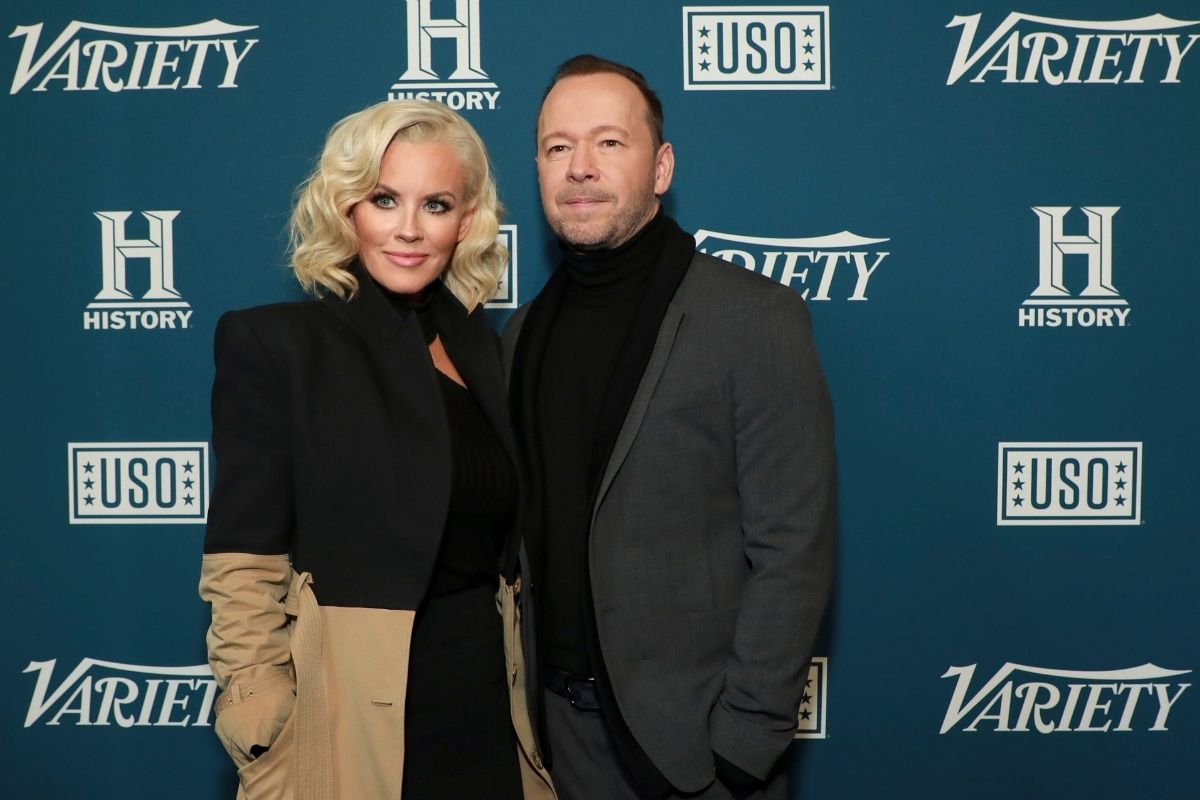 After divorcing director John Asher, Jenny McCarthy wasn’t expecting to find fairytale romance. She was more focused on supporting her son, Evan Joseph Asher, who had been diagnosed with autism. In addition to learning about treatments, Jenny was heading the autism advocacy group, Generation Rescue.

Then, of course, there was Jenny’s career,  after being named Playmate of the Year in 1993, Jenny went on to co-host MTV game shows and host her very own talk show, The Jenny McCarthy Show. Over the years, the former Playboy magazine model also popped up as a guest on numerous sitcoms, as well as movies like BASEketball and Scary Movie 3.

But somehow amidst her colorful, busy life, Jenny did manage to find love, with not one but two of Hollywood’s most talented men: Jim Carrey and Donnie Wahlberg.

Jenny met Jim Carrey in 2005, shortly after divorcing her husband of six years. The two celebs met at actor David Spade’s birthday party. Within a few years of dating, the two of them were living together without any plans to marry. As Jim told CNN’s Larry King, “I like it the way it is, and I think she likes it the way it is. And that’s all we need. I really don’t, at this point of my life, feel like I need to have the approval of someone in the collar or a judge to tell us that our relationship is sacred.”

While their relationship was famously fun-loving and happy, Jenny and Jim ended up parting ways after five years of being together. “He didn?t want to move to Los Angeles, and she certainly can?t move to Boston,” one source said of the breakup. “They?re still friends, they just couldn?t make it work. “Jenny and I have just ended our 5yr relationship. I’m grateful 4 the many blessings we’ve shared and I wish her the very best! S’okay! ?;^>” the comedian tweeted.

A couple of years after their breakup, the former Playboy Playmate met her future husband Donnie Wahlberg while shooting an episode of Watch What Happens Live. Like Jenny, Donnie was divorced and had two kids from a previous marriage: Xavier and Elijah.

A year later, Donnie,  who was a founding member of New Kids on the Block and star of the Emmy-nominated Wahlburgers — appeared on Jenny’s talk show. After the show, Donnie scored Jenny’s number and asked her out a couple of weeks later. Within a year of dating, the couple decided to get hitched. Jenny announced the news on ABC’s The View, noting that her son Evan helped with the proposal. “This weekend I was sitting with Donnie and he went into the other room and out came Evan with a card that said ‘Will.’ she remembered. “And he ran away and came back with a card that said ‘You,’ and I knew what was happening and I just started crying. And then he came out with a card that said ‘Marry,’ but it was spelled ‘Mary,’ and the last time Donnie came out with Evan and Evan’s shirt said ‘Me?’ and he was holding the ring. He asked, ‘Will you marry me?’ I of course said yes.”

In the months before getting married, the duo began filming a reality TV show called Donnie Loves Jenny. The show continued after the couple was wed at the Hotel Baker in St. Charles, lasting three seasons. Eventually, the couple decided to halt production to give Evan privacy as he navigates the awkward high school years. “He doesn’t want film crews in his house and I can understand that, especially those teenage years,” Jenny said.

Currently, Jenny is a judge on the Fox music competition show The Masked Singer and she has a popular show on Sirius XM called Dirty, Sexy, Funny.  Donnie, for his part, continues to star in the TV series Blue Bloods.