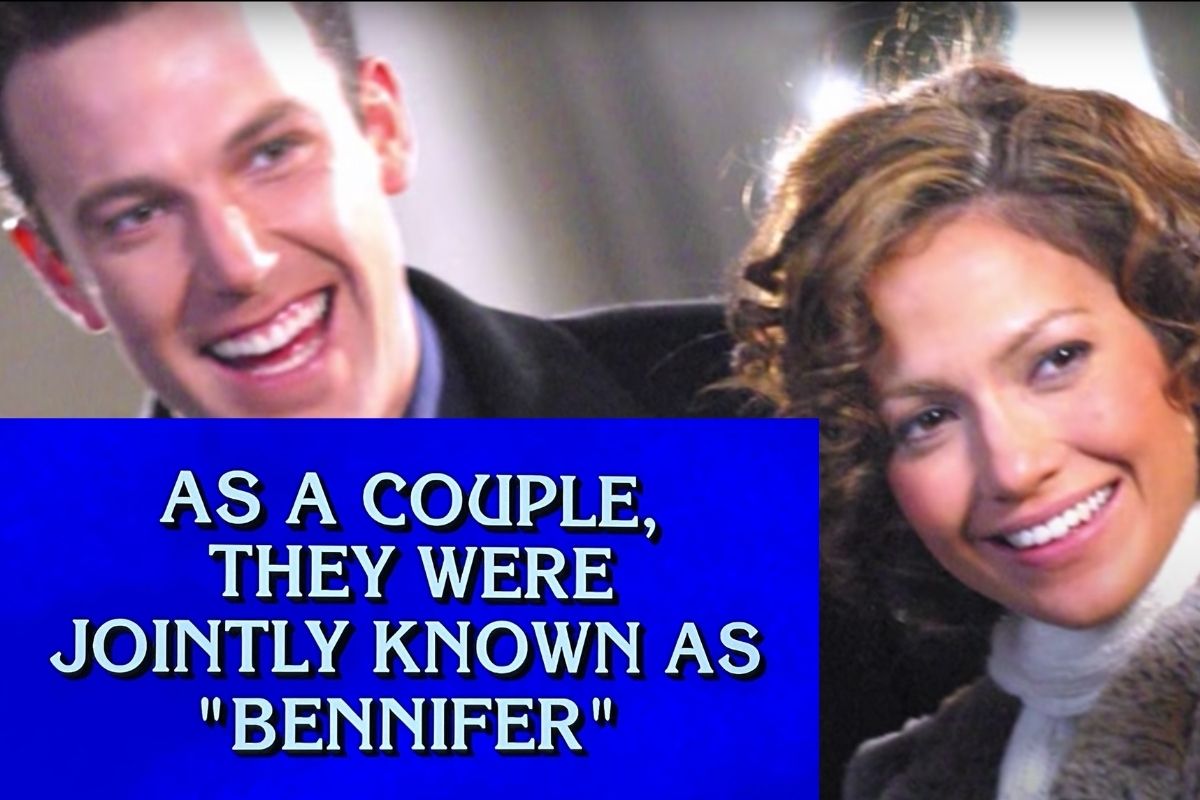 Ben Affleck and Jennifer Lopez are dominating headlines, as the early-aughts celeb power couple appears to be back together — 17 years later. And the game show Jeopardy! clearly stans. The answer “Bennifer” kicked off last Friday night’s episode under the Pop Culture category. But the real kicker? These episodes are filmed weeks in advance… meaning Jeopardy! staff writers suspected this reunion long before the romantic rumors were confirmed.

This would have been filmed well before Bennifer 2.0 🤯
Also, c’mon Justin. #Jeopardy pic.twitter.com/WIgaTLsSoN

Watch a clip of that surprising ‘Bennifer’ clue above.

The May 14 episode of Jeopardy! featured guest host Bill Whitaker in his final episode. After giving an obligatory pre-sign-off, which honored Alex Trebek, Whitaker introduced the day’s contestants and the first round of categories: The Art of Leadership, Pop Culture, Montana, The Stock Marker, Thicker Than Water, and A Call on the Homophone. Contestant Justin Williams buzzed in first once returning champ Amanda Ganske chose the Pop Culture category. The very first question? Er, answer: “As a couple, they were known as Bennifer.”

And his guess? “Who are Ben Affleck and Jennifer Aniston?” Aniston. Seriously. Wrong Jen, Justin! Come on. He wasn’t even close. At least Jennifer Garner, Affleck’s wife of 13 years, would have been a valiant guess. And it looks like he’ll have no chance to redeem that early 2000s trivia fail: Ganske once again took home the prize and will return to Jeopardy! for today’s episode with guest host Buzzy Cohen.

It’s been less than a month since Jennifer Lopez publicly split from her fiancé, baseball player Alex Rodriguez. And while J-Lo and A-Rod did make a cute couple, there’s another catchy name that we never forgot about: Bennifer.

After meeting as co-stars on the movie Gigli in 2003, the young A-list struck up a romance that fascinated the hungry Hollywood tabloids. Affleck even proposed to the singer-actress with a famously pink diamond ring. As fiancés, they attended the Gigli premier together in the summer of 2003 but just months later, they were broken up. A year later, Lopez married the musician Marc Anthony. Affleck wed actress Jennifer Garner in 2005.

But now, two divorces and countless flings later, it seems the once-iconic duo has reunited! At the end of April, pics leaked of Affleck leaving Lopez’s Los Angeles home. And though the spotting alone could not confirm a romance, now it’s official. Last week, the pair traveled to Montana together for a romantic getaway and a source close to Lopez confirmed to Us Weekly that things are moving in a “romantic direction.”

Excuse me but Jeopardy (filmed weeks in advance) manifested Bennifer 2021 AND their getaway to Montana with the clues that aired tonight!!! ✨✨#Jeopardy #Bennifer pic.twitter.com/08kX7NXsVW

“Excuse me but Jeopardy (filmed weeks in advance) manifested Bennifer 2021 AND their getaway to Montana with the clues that aired tonight!!!” Twitter user @GlamBex posted on May 14th. And it didn’t take long for the rest of Twitter to light up over the reunion of @benaffleck and @JLo… and the possible Jeopardy! premonition. As @GlamBex points out, the Bennifer question is one thing but Jeopardy! also teased the Montana vacation!

Considering that Jeopardy! episodes film weeks, up to months, in advance, fans of Bennifer and Jeopardy! alike are in awe. The story has remained trending with many fans wondering if the syndicated Sony program can indeed predict the future. And that’s not the only conspiracy Jeopardy! conspiracy theory floating around lately…