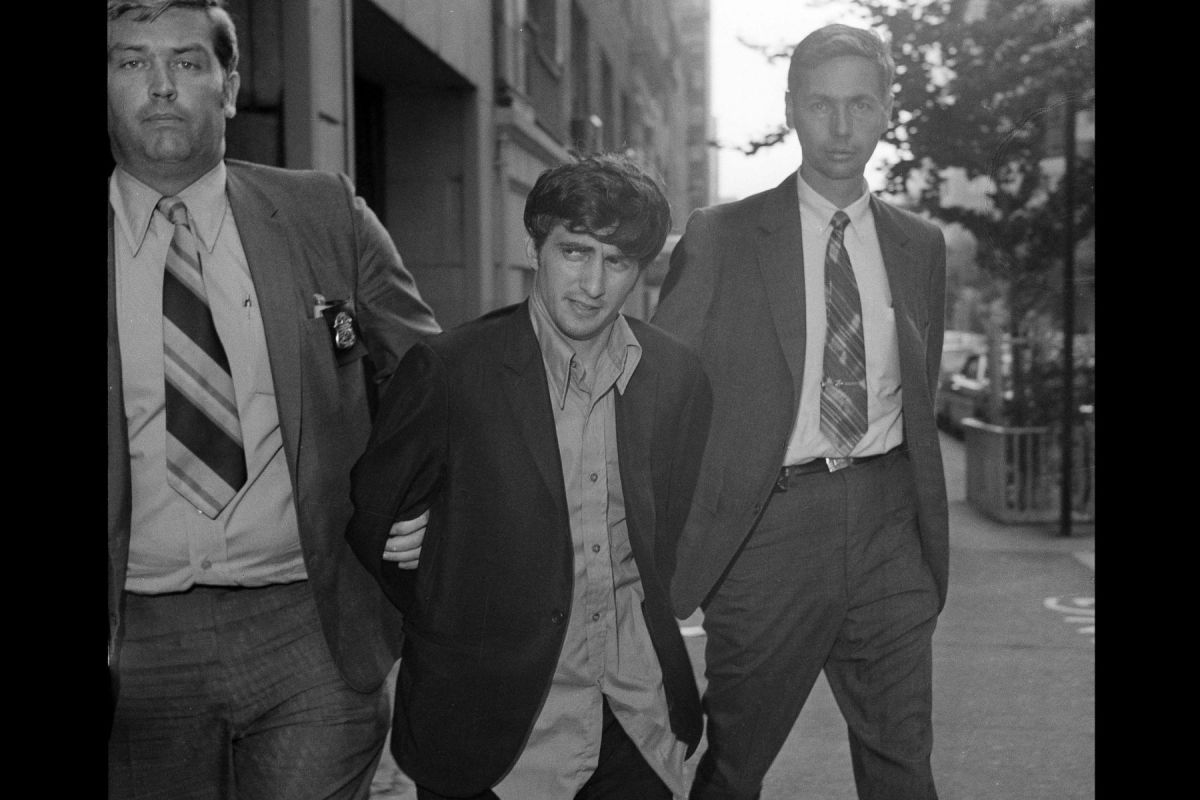 Polish-Italian-American John Wojtowicz was born and raised in Brooklyn, New York City. He served in the Vietnam War and had his first gay experiences during basic training. After coming home, Wojtowicz married a woman, Carmen Bifulco, and the couple had two children. In 1969, he left the family to pursue new relationships.

John Wojtowicz joined the Gay Liberation movement that was burgeoning in the city’s Village neighborhood. In 1971, Wojtowicz met Liz Eden, a transgender woman, and became instantly infatuated. At the time, Liz went by the name Ernest Aron; Wojtowicz called her Ernie. The two married later that year in a lavish ceremony; Eden wore a dress and the bridesmaids were in drag. At the time, such a public ritual was rare for any gay couple so the special wedding was an auspicious event. But Eden remained depressed, and increasingly suicidal, throughout their first year of marriage. She longed for gender reassignment surgery — something she and Wojtowicz could not afford.

Following a suicide attempt and violent clash with her husband, Liz Eden was institutionalized in 1972. Soon after, John Wojtowicz enlisted the help of two friends — Salvatore “Sal” Naturale and Bobby Westenberg — to rob a Chase Manhattan bank. Being a former bank teller himself, Wojtowicz expected to pull the plot of seamlessly. But he was very, very wrong.

As soon as the bank robbery got underway, Bobby Westenberg fled the scene. One man down, John Wojtowicz and Sal Naturale abandoned their initial plan and took seven of the bank employees hostage for 14 hours. Shocking live footage, in addition to colorful photos from Eden and Wojtowicz’s wedding, dominated the media coverage as the situation at the Chase Manhattan bank spiraled into a non-stop news frenzy.

At one point, John Wojtowicz emerged from the bank and emotionally demanded to speak to Liz Eden. The cops, surprisingly, obliged and fetched Eden from the mental hospital she was confined. And like it is portrayed in Dog Day Afternoon, Wojtowicz’s lover (played by Chris Sarandon) did show up to the bank, disheveled in a hospital robe.

Eventually, John Wojtowicz, Sal Naturale, and the hostages were all transported to JFK International Airport, where the robbers were under the impression that they were boarding a getaway plane. But the FBI agent who drove the car shot suddenly shot, and killed, Naturale with a concealed pistol. It was then that Wojtowicz finally surrendered.

When Dog Day Afternoon premiered in 1975, it was advertised as being based on a true story. Screenwriter Frank Pierson had based the Oscar-winning screenplay on “The Boys in the Bank,” P. F. Kluge’s Life magazine article which detailed John Wojtowicz’s 1972 crime. A-lister Al Pacino (who had already starred in The Godfather) played Sonny Wortzik, the fiery antihero inspired by Wojtowicz. Though Wojtowicz would later complain to The New York Times over inaccuracies within the film, Sidney Lumet’s darkly psychological take on the bungled debacle was a Hollywood hit.

The Dog Day Afternoon filmmakers arranged for John Wojtowicz, who was imprisoned at the time, to receive $7,500, plus 1% of the film’s net profits. (Later, Wojtowicz sued Warner Bros. and earned an additional $100,000.) That money was used, finally, for Liz Eden’s sex-change operation: the mission which had first inspired Wojtowicz’s twisted quest. Regardless of that personal triumph, the couple eventually split acrimoniously. And sadly, Eden died of AIDS in 1987 when she was just 41 years old.

Following the Chase robbery, John Wojtowicz was sentenced to 20 years in Lewisburg Federal Penitentiary and served five. He returned to prison twice more, during the 1980s due to parole violations. After prison, Wojtowicz attempted to cash in on his Dog Day fame by publicizing his criminal identity. But Wojtowicz never quite succeeded in achieving any enduring celebrity. He died of cancer in 2006, at the age of 60. At the time, he was on welfare and living with his mother in Brooklyn.

To learn more about Wojtowicz’s life, check out The Dog. The documentary, splicing together archival footage with new interviews, is now streaming on Tubi, Vudu, and Pluto TV. Pacino’s masterful performance in Dog Day Afternoon portrayed Wojtowicz’s as a nervous, hyper-masculine New Yorker in over his head — a fascinating characterization — but The Dog goes further to capture Wojtowicz’s unyielding bravado. Seriously, you’ve got to listen to this guy talk about his renegade, sex-crazed past; he does not hold back.