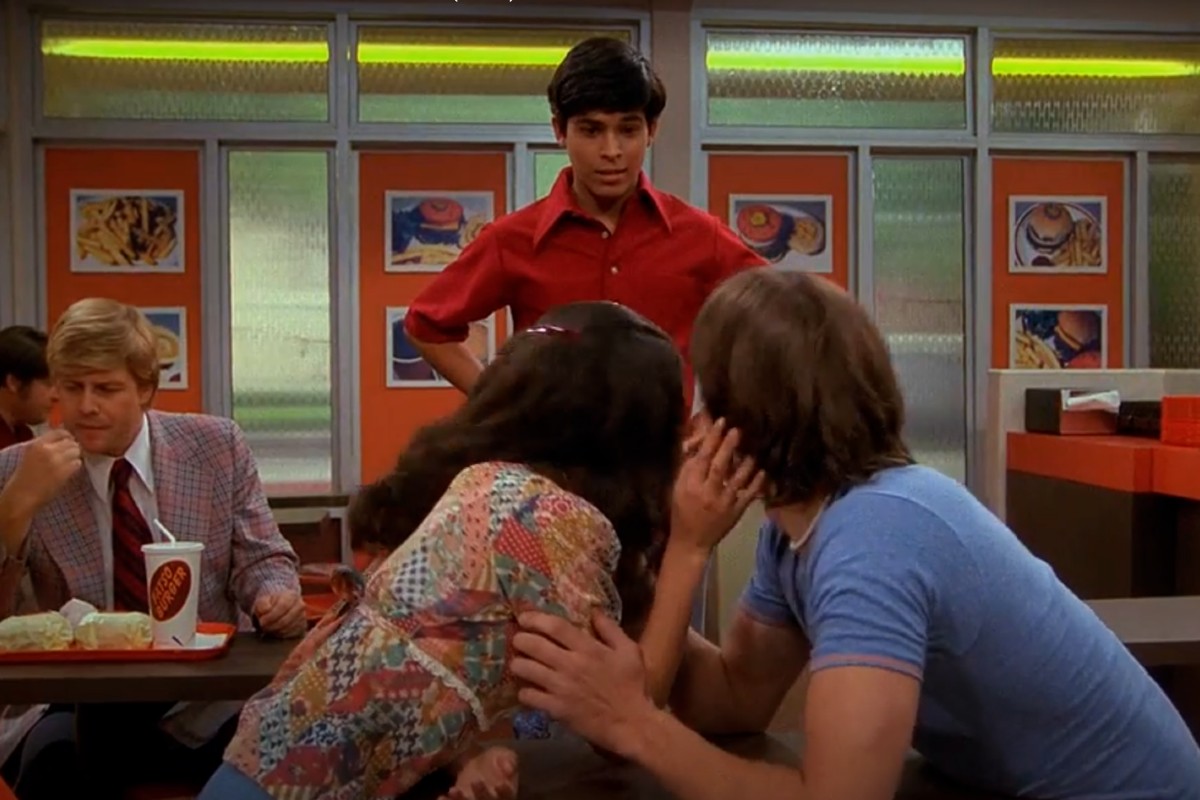 “Besides, if you worked here, you couldn’t see me whenever I wanted to… lover.” That’s the steamy line spoken by Jackie Burkhart (played by Mila Kunis) before she kisses Michael Kelso (Ashton Kutcher) for the first time on That ’70s Show.

It would be the first of many kisses shared onscreen between the iconic TV couple. And — as the actress revealed years later during a 2001 interview with People — that famous first scripted kiss between Michael and Jackie was also Kunis’ first kiss in real life.

“I’m the first guy she kissed? Oh my god, I had no idea!” said Kutcher when he found out. “I’m so glad I didn’t know that or it would’ve been too much pressure.”

Fast-forward to today Kutcher and Kunis are happily married. To celebrate the celebrity couple finally finding each other, let’s go back to when it all started and remember their adorable on-screen relationship in this Fox comedy.

For those of you who could use a refresher, let’s go back a few decades to when That ’70s Show hit the airwaves.

The eight-season TV show storyline followed a group of teenagers coming of age during — you guessed it — the ’70s. Based in Wisconsin, the show starred Eric Forman (Topher Grace). As the show’s main character, Eric had a super cool basement where all his friends liked to smoke weed in — much to the chagrin of Eric’s parents Kitty (Debra Jo Rupp) and Red Forman (Kurtwood Smith).

At the beginning of the show, the rich, popular, charmingly spoiled Jackie is somewhat of an outsider, and is excluded from the gang’s plans to go to a Todd Rundgren concert. As smart as she is sassy, Jackie catches on, and convinces Kelso to give up his ticket to spend time with her.

“Me! You need me, Michael! You’re just too shy to say that,” Jackie informs him.

And so, Jackie becomes one of the gang.

What happened to Jackie & Kelso?

Michael Kelso actually left the sitcom a few episodes before the show ended. After eight seasons of their fervent, on-again-off-again relationship — which endured many break-ups and Kelso’s multiple infidelities with Pam Macy and Eric’s sister Laurie Forman — Michael proposes to Jackie.

Jackie, after thinking about it, turns him down. Michael is relieved, saying Jackie has made him “the happiest man in the world”. After he’s turned down, Kelso moves to Chicago to be near his daughter (who he shared with his short-lived love interest Brooke), and doesn’t appear again until the season finale.

What about Kunis & Kutcher?

Jackie and Kelso may not have ended up together, but their actors — Kunis & Kutcher — started dating in 2014 and were married a year later.

Back in their Jackie-Kelso days, neither would have dreamed they’d end up together in real life. “We started dating with the idea we were both never going to get married,” Kunis confessed. “A year later we were like, ‘Tomorrow let’s [get married].’ ”