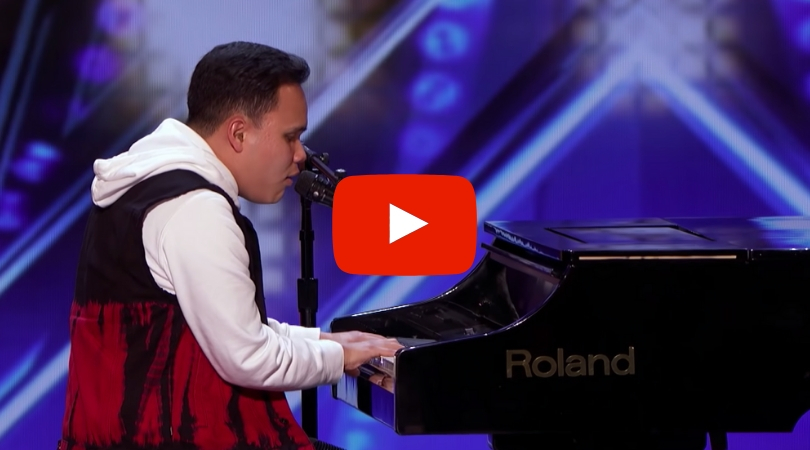 22-year-old singer Kodi Lee captivated not only the heart of NBC’s ‘America’s Got Talent’ judges and mine, but the millions of Americans watching the show in the comfort of their home. Lee is a singer and a pianist who was born blind and has autism. Along with his mother’s assistance, both went on stage, guided with his cane while walking arm in arm. After introducing himself, Lee cheerfully told the judges he was going to sing a song on the piano for them, spreading out his energy across the audience.

His mother, Tina Lee, gave some background about her son, saying that at a young age he loved music. Whenever he would listen, his eyes would light up and would start to sing. She explained, “Through music and performing, he was able to withstand living in this world, because when you’re autistic, it’s really hard to do what everybody else does. It actually has saved his life, playing music.” The autistic singer has an “audio photographic memory” in which he can recall the music he hears after just one listen.

Calling her son an entertainer, she accompanied him to the piano, crouching down to offer some final motivational words asking if he was ready. And boy, was he ready than ever. Lee began to play Leon Russell’s “A Song for You”, followed by a soulful voice accompanied to it, complemented by a highly effective falsetto. Let me tell you, to say this man has talent is an understatement.

So, as expected, the judges were in awe of his talent, with Simon Cowell immediately mesmerized, jumping to his feet as soon as Lee was finished. Julianne Hough and Howie Mandel smiled ear to ear, while Hough is seen wiping away her tears.

Taking the stand, Gabrielle Union noted that she wasn’t just a new judge this season, but a new mother as well, which she called her “toughest job” yet. She spoke to Kodi’s mom, saying that she admired her and her son and knows the challenges one faces when raising children. Inspired by their journey, she explained how she wanted to give him “something special,” quickly raising her arm and pressing down on the golden buzzer.

This was the season 14’s first golden buzzer and an express ticket to the midsummer live shows. I don’t know about you, but I’ll be watching every Tuesday from now on. I guess this just goes to show you that sometimes music has the ability to heal others, and can become an outlet, despite complications getting in our way.

It truly is an inspiring moment to watch, and surely had everyone in tears. I mean…I cried my eyes out, I’ll admit it. Safe to say this performance will open so many doors for others who are afraid to go on the show and will be an audition to remember.

Editor’s note: This article was originally published on February 18, 2020. We decided to bring it back because we are still blown away by this amazing performance!