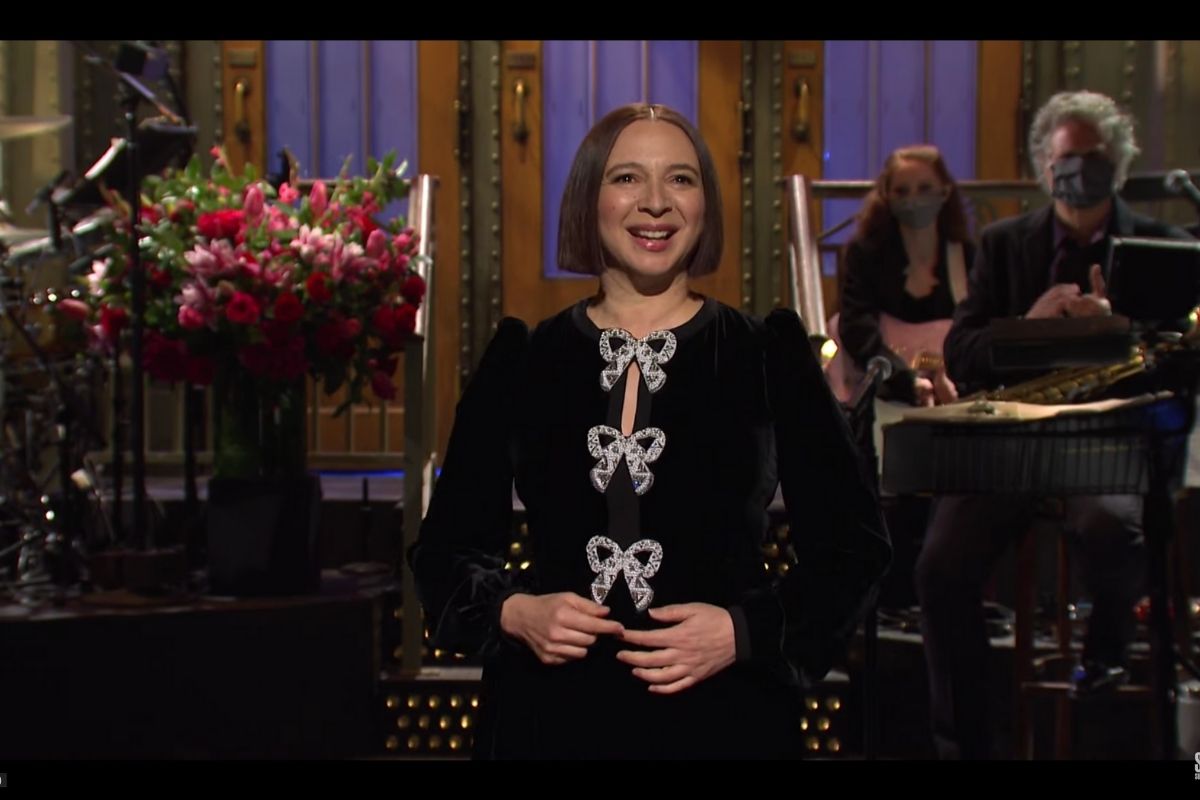 Saturday Night Live alum, and legend, Maya Rudolph has made many, many cameo appearances since leaving the late-night comedy show in 2007. But Saturday night officially marked her first time hosting on the NBC stage. The familiar face played some familiar characters, like Kamala Harris and Beyoncé, while also added some new, timely personas to the mix.

This season, Saturday Night Live has been leaning heavily on the game show format to cover time-sensitive material. It seems the trend will continue. But frankly, this was a weak opening sketch that acknowledged the pandemic partying, blithely, without really delving into the violence that occurred last week in Miami.

Maya Rudolph’s monologue was mom-themed. This made for an obvious, but sweet, bit about babying the rookie cast members Punkie Johnson, Andrew Dismukes, and Lauren Holt… which descended inexplicably into an extended joke about The Breakfast Club.

In this lengthy sketch set at a “unity Seder”, Maya Rudolph reprised her regular role as Vice President Kamala Harris with Martin Short popping up, surprisingly, as her husband: adoring second gentleman Doug Emhoff. Seriously, props to Short for capturing Emhoff’s funnily affectionate persona, one-moment shying away as “just an entertainment lawyer” and the next: canoodling his powerful wife for the world to see, dorky smile on full display.

Though “Kamala” lacked the structure of a tighter political sketch, the Passover party setting proved useful for touting some of the cast’s impressive impersonations. Chloe Fineman popped up as a dead-ringer for hipster Bushwick darling Ella Emhoff in an appearance that was, while predictable, also cute. Poor Aidy Bryant was stuck playing Ted Cruz again while Kenan Thompson played Sen. Raphael Warnock and Alex Moffat flexed his semi-commanding Joe Biden, which I say is certainly as good as Jim Carrey‘s. Finally, there was Cecily Strong as Marjorie Taylor Greene — who entered the seder “insurrection style,” climbing through the window. And even Biden’s bad dog Major had his moment to shine — furiously attacking Mr. Emhoff.

“Boomers Got the Vax” is an example of SNL‘s music video format done right. The rhymes, the exaggerated costumes… everything was over-the-top enough to make anyone chuckle, while incorporating millennial zingers like “Got all the money, now we got the vaccination / crashed the economy three whole times but when it comes to the vax, we the first in line.”

“NFTs” was not as strong as “Boomers Got the Vax,” but I had to rank this sketch for the interaction between Janet Yellen (Kate McKinnon) and Pete Davidson alone. The idea of a college classroom Q&A with the Secretary of Treasury descending into a chaotic line of rap-style questioning about the latest cryptocurrency felt true, fantastically topical.

4. Hot Ones with Beyoncé

In this now-viral sketch, Maya Rudolph updates her Beyoncé impersonation, placing the ultra-cool idol on the set of Hot Ones, the popular web series where host Sean Evans questions celebs as they eat increasingly spicy chicken wings. Here though, Rudolph’s wig was the real star — adding to a near-perfect approximation of Bey’s edgy Grammys look. It also raises the stakes for Rudolph’s eventual sweaty meltdown.

Riffing on The Shining, “The Maya-ing” follows Maya Rudolph around a ghostly Studio 8H as she walks down memory lane, recalling skits with friends like Kristen Wiig, Jimmy Fallon, and Fred Armisen. Along the way, she runs into (a naked) Rachel Dratch, a disguised Tina Fey, and even transports into an OG SNL cast picture — featuring the likes of Dan Aykroyd and Jane Curtain, and John Belushi. “The Maya-ing” was definitely a niche fan service, but fun all the same.

Cast member Bowen Yang joined Colin Jost on the TV news segment, as himself, to discuss the rise in anti-Asian hate around the United States. Covering a real and tough topic, comedically, while on live television is clearly a cultural tightrope walk. But Yang spoke with grace about the recent tragedies, while still managing to crack a few one-liners — mainly pointing out the hypocrisy of many white allies. And I’ll be honest: I teared up when he mentioned Xiao Zhen Xie, the Asian grandmother who fought against her attacker on a San Francisco street.