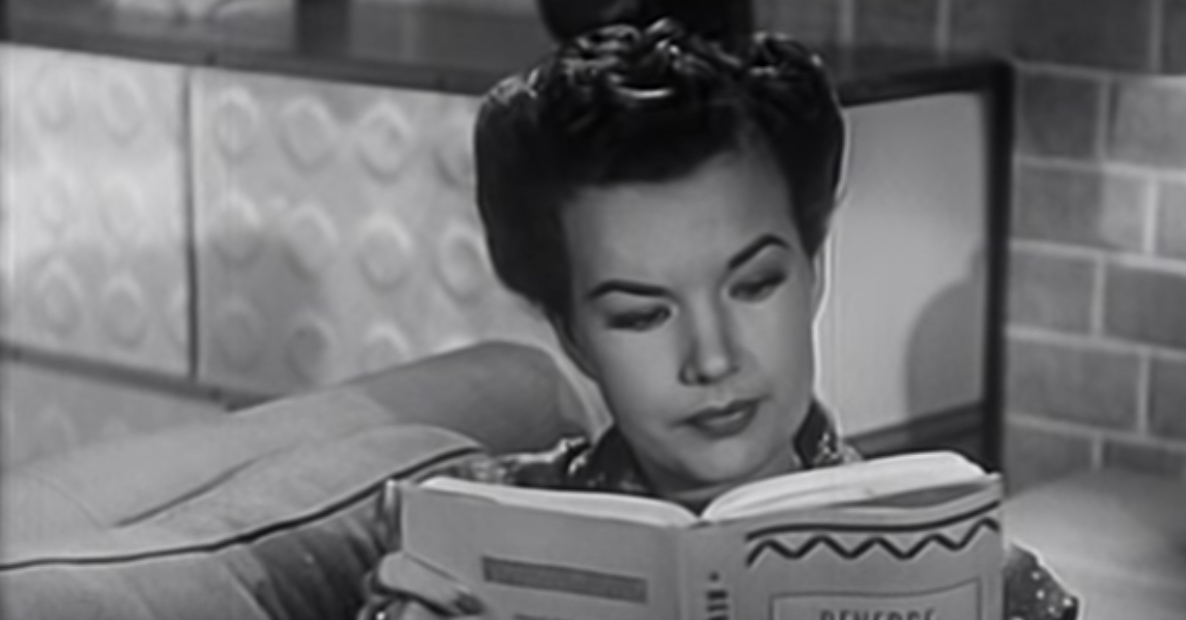 The classic TV series My Little Margie starred Gale Storm and Charles Farrell as a daughter and widowed- father pairing. Both actors were former silent film stars. In the show, the father Vernon Albright and daughter Margie Albright live together at the Carlton Arms Hotel. Vern holds a job at Honeywell and Todd investment firm and worries his daughter’s mischief may cost him an account.

While his daughter’s main goal is to protect her father from young socialites after his fortune. Together the two create a warm sitcom reminiscent of the likes of I Love Lucy. My Little Margie actually premiered in 1952 as a summer replacement for I Love Lucy on CBS. The show, created by Frank Fox ran for four seasons from 1952-1955. An accompanying radio show aired on CBS radio, as well.

Gale Storm was more popular on television and as a singer, but she would still make an impression in films. At the age of 17, at the insistence of her teachers, Storm entered a radio contest called, Gateway to Hollywood. She not only won first place, she won a one-year contract with a studio. Gale Storm would appear in a number of RKO films throughout the 1940s like Tom Brown’s School Days and One Crowded Night. During the 1950s, she would appear in the film noir dramas, The Underworld Story and Between Midnight and Dawn, which increased her popularity. However, it was the television shows, My Little Margie and The Gale Storm Show that really made her a big star. Storm would also release a number of songs that would make the top ten hits list. Her cover of, “I Hear You Knockin’” sold over a million copies and peaked at No. 2. She also covered Dean Martin’s “Memories Are Made of This” and Gloria Mann’s “Teen Age Prayer”. Amazingly, Gale Storm has three stars on the Hollywood Walk of Fame. One for television, another for music, and the third for radio. #galestorm #tcm #radio #music #ihearyouknockin #tombrownsschooldays #onecrowdednight #theunderworldstory #betweenmidnightanddawn #mylittlemargie #thegalestormshow #walkoffame #vintage #oldhollywood #hollywood #cinema #film #classiccinema #classicfilm #classichollywood #goldenageofhollywood #goldenage #goldenagecinema #goldenagefilm

Josephine Owaissa Cottle, later known professionally as Gale storm was a singer and actress. After My Little Margie, she was offered her own sitcom, The Gale Storm Show. The situation comedy, starring Gale ran from 1956-1960. The actress also found success as a singer. Six of her songs charted as top ten hits. She married and was widowed twice. She had four children, Peter, Phillip, Paul, and Susanna. She died on June 27, 2009, at age 87.

Birthday star: Charles Farrell (August 9, 1900 – May 6, 1990) was an American film actor of the 1920's silent era and into the 1930's, and later a television actor. Farrell is probably best recalled for his onscreen romances with actress Janet Gaynor in more than a dozen films, including 7th Heaven, Street Angel, and Lucky Star, and on TV in the sitcom My Little Margie (1952–55), playing Vern Albright, long-suffering father of the title character (played by Gale Storm). #CharlesFarrell #MyLittleMargie

Playing Margie’s father Vern Albright was Charles Farrell. He got his start in the 20s silent films. He was known for films starring Janet Gaynor, with whom he was romantically involved. The two starred in 12 films together, including 7th Heaven, Lucky Star, and Street Angel. After the My Little Margie show ended, he starred in The Charles Farrell Show as himself. After acting he was a key player in the development in the city of Palm Springs, California, even opening the Palm Springs Racquet Club. Farrell died in 1990 in Palm Springs.

Predominantly a vaudeville performer, famous for his traveling duo Kolb and Dill with Max Dill, Clarence Kolb was a known funny man. Before the 1920s, he was in a series of short films with this act. He perfected his act and started appearing in feature films often playing a businessman or politician. His most popular film was His Girl Friday and Merrily we Live, an Academy Award-nominated comedy film. He plays George Honeywell in My Little Margie, the boss of Vern Albright. His final role was playing himself in Man of a Thousand Faces.

The boyfriend of the young Margie, Freddie Wilson was Don Hayden. As an actor he played in fewer than 12 films over fourteen years and most of his roles went unbilled. He had some guest work before retiring.