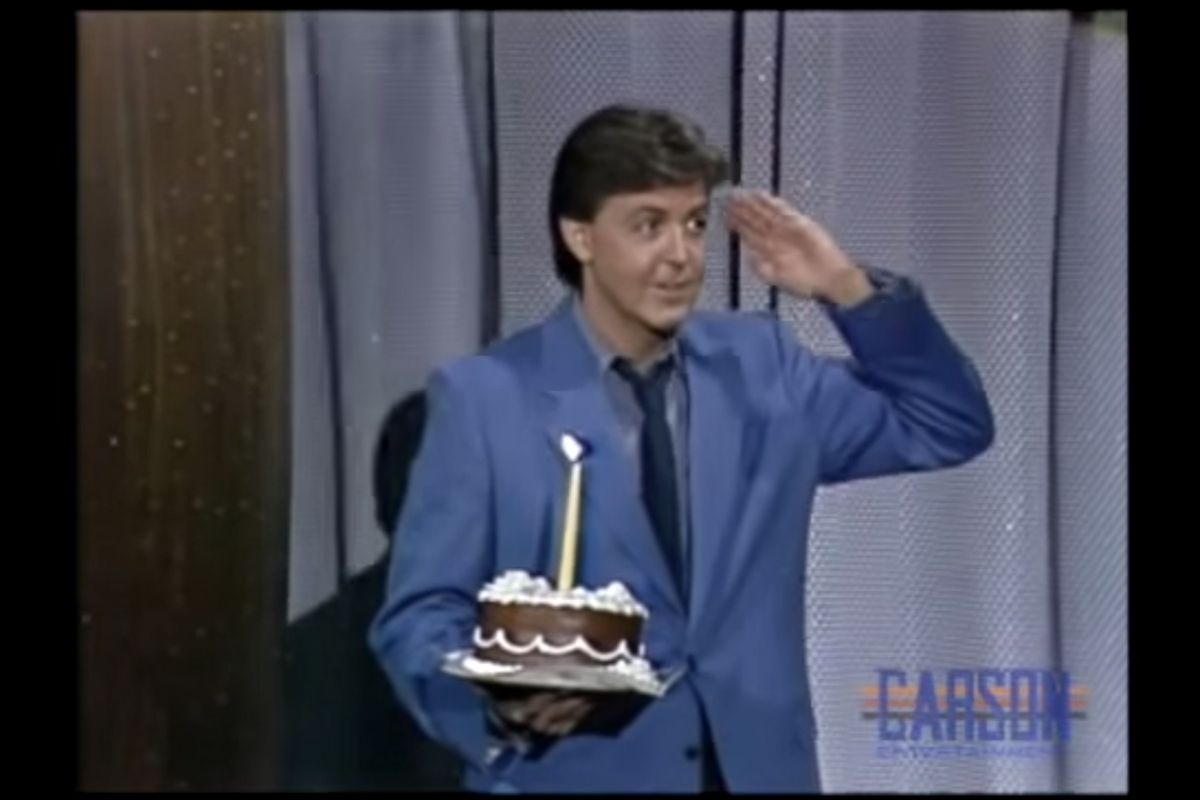 “I remember the first time I saw the Beatles in this country was on the old Ed Sullivan Show,” Johnny Carson said as he introduced his next guest: Paul McCartney. The Ed Sullivan appearance was so historic, this was a typical talk show introduction for any of the Fab Four. Especially considering Johnny Carson and Paul McCartney had not yet met ? and so what came next was quite the surprise. McCartney walked out proudly carrying a birthday cake for The Tonight Show host.

In 1984, when Paul McCartney brought him a birthday cake, Johnny Carson had been hosting The Tonight Show for 22 years. And while it may be hard to envision a Tonight Show before Johnny Carson, the NBC program actually originated in 1954; Carson replaced Jack Paar as the host in 1962. Instantly, Carson was recognized for his easygoing style when interviewing guests. He introduced the conversational approach which is now the standard for all popular talk shows. His successor Jay Leno and competitor David Letterman both cite Carson’s immense influence.

During his long reign as the king of late night, Johnny Carson also established the typical variety series format. Generally: a stand-up infused monologue, followed by sketch comedy, then celebrity guest interviews, musical performances, and of course, his beloved animal encounters. Since Hollywood actors were such a staple of the show, recording The Tonight Show moved from 30 Rock in New York City to Los Angeles during Carson’s tenure. Unlike today’s contemporary hosts, Stephen Colbert and Jimmy Kimmel and Jimmy Fallon (who now heads The Tonight Show), Carson strictly avoided talking politics.

Johnny Carson maintained other strict rules as well. Although he was friendly on air, Carson was careful not to appear phony. He didn’t fake laugh. Although his appearances were miled-mannered, Carson still maintained a highly professional demeanor. He was known not to fraternize with guests outside of their interviews. Which is perhaps why the birthday cake from Paul McCartney came as such a shock.

The Interview with Paul McCartney

When Paul McCartney brought out the birthday cake, the crowd went wild. Amidst the cheering, McCartney and Johnny Carson shook hands for the first time. After McCartney blew out Carson’s candle (!), the singer took his seat and the pair quickly got down to business. Carson had interviewed bandmates John Lennon and Ringo Starr in the past, but not McCartney. When McCartney had appeared on the show previously, it was with the guest host Joe Garagiola. So October 23, 1984 marked McCartney’s first time on The Tonight Show with Johnny Carson.

Johnny Carson immediately questioned Paul McCartney about the Beatles’ Ed Sullivan performance, saying that Sullivan had dedicated the performance to Carson. (Carson didn’t understand why.) But in a classic awkward Tonight Show twist, McCartney shut him down: “No, I don’t think that’s true.” Carson moved on quickly.

In 1984 Paul McCartney was making his rounds in the United States to promote his new film, Send My Regards to Broad Street. The semi-documentary musical follows a fictional day in the life of McCartney and featured both his wife Linda and friend Ringo Starr. The experimental venture turned out to be a commercial and critical flop. But you can watch it below, in full.

Paul McCartney on Give My Regards To Broad Street

Johnny Carson then questioned Paul McCartney about his early decision to get involved in music; McCartney’s father was a musician and played trumpet “until his teeth gave out.” The interview is fairly conventional until Carson asks McCartney ? who has completed thousands of interviews ? what question hasn’t he been asked? (His meta answer: “That one.”) As a father of four, McCartney discusses his daily routine which is relatively quiet compared to the age of Beatlemania. Of course, for McCartney, a mellow schedule includes filmmaking, recording new solo music (Wings broke up in 1981), and stopping by The Tonight Show. After being joing onstage by SNL comedian Marry Gross, McCartney’s memorable appearance concluded with a cover of “My Only Sunshine” on the guitar Carson not-so-sneakily left out for him.

Paul McCartney Inside A Birthday Cake On Bojack Horseman

Watch: The Beatles Iconic Debut on ?The Ed Sullivan Show? in 1964 Won the Hearts of Americans