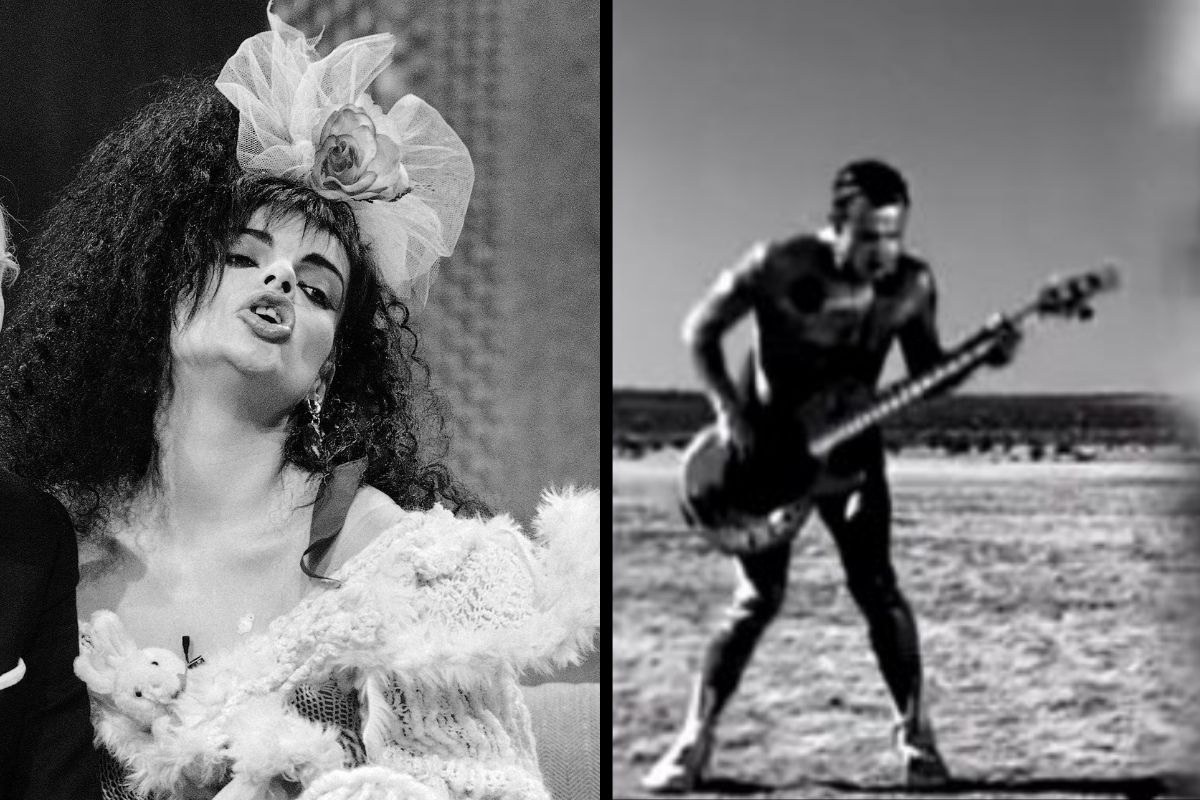 Alt-rock heavy-hitters The Red Hot Chili Peppers have roots in grunge, punk, psychedelic rock, and even funk and rap. With such an eclectic discography, this Los Angeles band reigned throughout the 1990’s, often altering their sound. Long before the resounding success of Californication, early albums like Blood Sugar Sex Magik introduced listeners to such rhythmic hits as “Give It Away.” Released in 1991, “Give It Away” remains one of the Red Hot Chili Peppers’ most famous songs. And while the refrain is seemingly simple, it actually reflects a personal story from the life frontman Anthony Kiedis ? and offers insight into his unusual romance with the German new wave icon Nina Hagen.

“Give It Away” By The Red Hot Chili Peppers

The Rise of the Red Hot Chili Peppers

The Red Hot Chili Peppers formed in Los Angeles, California in 1983. Lead singer Anthony Kiedis, guitarist Hillel Slovak, bassist Flea, and drummer Jack Irons were all classmates at Fairfax High School. Their debut album, The Red Hot Chili Peppers, premiered in 1984 and found garnered a local fanbase through radio station play. George Clinton produced the band’s second album the following year, Freaky Styley. Throughout the recording process, band members began indulging in heavy drug use. This would greatly affect their creative direction. For the band’s next project, more than a third of the budget was set aside for heroin and cocaine. Anthony Keidis’ own addiction worsened to the point that he was briefly fired from the band. In 1988, Slovak died of a heroin overdose. So deeply troubled by the experience, Keidis did not attend his funeral and Irons left the band for good. (Irons would eventually join Pearl Jam.)

?? but then there was this exquisitely beautiful, older woman, to me because she was probably twenty-nine or thirty and I was maybe twenty or twenty-one. She had this crazy thick accent and she was all colourful? And it was Nina Hagen. She was so beautiful and so exotic looking. She had her colorful, alien, superfreak look, but beyond that she was just very East German. Overbite, high cheek bones. Just a radiant lady and I fell in love with her at that moment? That was also the beginning of a romance that sparked up for a little while. She taught me a lot about life at a young, tender age??

Anthony Kiedis’ detailed account of Nina Hagen’s colorful appearance accurately captures what made the international punk rocker such a unique force throughout the 1980’s. A product of West Berlin’s musical epicenter, Kreuzberg, she made her hard rock debut in the self-formed Nina Hagen Band. Hagen was immediately noticed for her weirdly exaggerated vocal style. Hagen eventually branched out from her home country of Berlin, recording the English album Nunsexmonkrock and other American hits, “Zahra” and “New York, New York.”

Performing, for Nina Hagen, was about theater as much as music. In addition to song, she brought to the stage an intense visual presence ? which was obviously noted by Anthony Kiedis. Her flamboyant makeup and style made Hagen a larger-than-life figure during the burgeoining punk era, and earned her the nickname “godmother of punk.” And she certainly occupied the same role in her relationship with Kiedis. As explained in his autobiography Scar Tissue, Hagen’s deeply spiritual beliefs taught Kiedis a lesson that would eventually lead to the creation of “Give It Away.” Long after her fling with Kiedis, Hagen is still making news for her eccentric personality and controversial views; she is Hare Krishna, a UFO enthusiast, and a self-described AIDS denialist.

Nina Hagen and Anthony Kiedis were not together long. But their brief romance ? during the peak of Kiedis dark heroin addiction ? left a meaningful impact on the young songwriter. Kiedis details one especially tender moment in Scar Tissue. Kiedis was sifting through Hagen’s fashionable closet and noticed an especially cool coat. Commenting that he liked it, Hagen immediately told him to keep it. She said, “If you have a closet full of clothes and you try to keep them all, your life will get very small. But if you have a full closet and someone sees something they like, if you give it to them, the world is a better place.? Kiedis was floored by the generosity.

?It was such an epiphany that someone would want to give me her favorite thing. That stuck with me forever. Every time I?d be thinking ?I have to keep,? I?d remember ?No, you gotta give away instead.? When I started going regularly to [drug and alcohol] meetings, one of the principles I had learned was that the way to maintain your own sobriety is to give it to another suffering alcoholic. Every time you empty your vessel of that energy, fresh new energy comes flooding in.?

Hagen was more than just a partner to the struggling Anthony Kiedis; she was a mentor. Her karmic message stuck with Kiedis long after their breakup, after the death of his dear friend Hillel Slovak, and even well into his eventual sobriety. It would take until 1991 for him to pen the words, ?Give it away, give it away, give it away now,? which (combined with a variety of topics, including River Phoenix, Bob Marley, and, more broadly, lust) would make up the hit song off Blood Sugar Sex Magik. Guitarist John Frusciante and bassist Flea composed the pared-down melody of “Give It Away” to back Kiedis’ words. Flea’s heavy baseline and riffs transfigure this repetitive set of lyrics with the power of mantra.

The spiritual context of “Give It Away” also drove the song’s experimental music video. Shot in black-and-white by French fashion photographer Stéphane Sednaoui, the video relies on otherworldly accessories to communicate story in a desolate desert location. (The choice is very Hagen.) A barren landscape condemns material excess. And on the nearly naked band members, glitzy statement pieces like horns, mirrored pants, and metallic paint elevate the song’s idealized selflessness with the stakes of rock’n’ roll. Like Nina Hagen’s super cool jacket, Anthony Kiedis’ lyrics envision a giving process with meaningful assets. The entire production is perfectly over-the-top.

Although Warner Bros. Records hated the unconventional music video, it was wildly popular, finding an immediate audience on MTV. Stéphane Sednaoui’s video would go on to become part of the Red Hot Chili Peppers’ canon, earning MTV awards for “Breakthrough Video” and “Best Art Direction.” And as for Anthony Kiedis, he was “more hysterically ecstatic about that piece of visual footage than anything [the band had] ever done.”