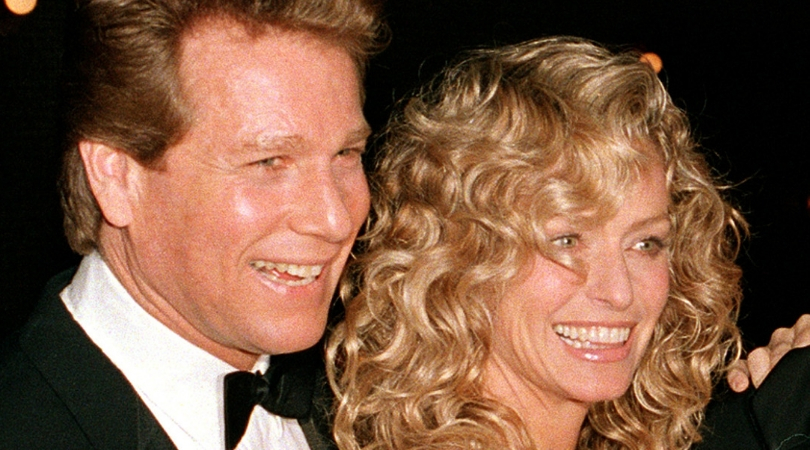 The late Farrah Fawcett was a beauty known for her blond feathered locks, that red swimsuit poster, and a cheerful smile. The Texas-born Charlie’s Angels star was a five-time Emmy Award nominee and a six-time Golden Globe Award nominee. She met her long-time partner, Ryan O’Neal through ex-husband, Lee Majors in 1979.

Lee Majors and Ryan O’Neal were loosely work friends. They knew of each other from the ’60s ABC drama tv shows, where they each began their careers. On an occasion when O’Neal traveled, Majors checked on his teenage daughter, Tatum O’Neal, and vice versa. When Majors was out of town, Lee checked in on his friend’s wife, Farrah Fawcett. And then he fell in love with her. By 1982, Fawcett divorced Lee Majors and was moving in with Ryan O’Neal. He already had three kids,  Griffin, Patrick and a daughter, Tatum.

The pair became the most well-recognized celebrity couple in the ’80s. Both of their careers started to slow. Once Farrah Fawcett left Charlies Angels in the 1980s, she didn’t take many roles. Ryan’s name wasn’t holding the appeal the box offices thought he would and struggled with substance abuse. This according to reports from his children.

The pair split in 1997 after O’Neal was found to be cheating on Fawcett with Leslie Stefanson, another, younger actress. In an interview with Vanity Fair, he confirmed the infidelity and admitted that if he could go back in time he would do things differently with Farrah.

Allegedly on that day, O’Neal was going to marry her, since that was something they never did. But he wanted to make that declarative action of love. However, it was too late. O’Neal wrote an autobiography,  Both of Us: My Life With Farrah to process his feelings and share their whirlwind story.