Is ‘Saturday Night Fever’ About Raping People In Cars? 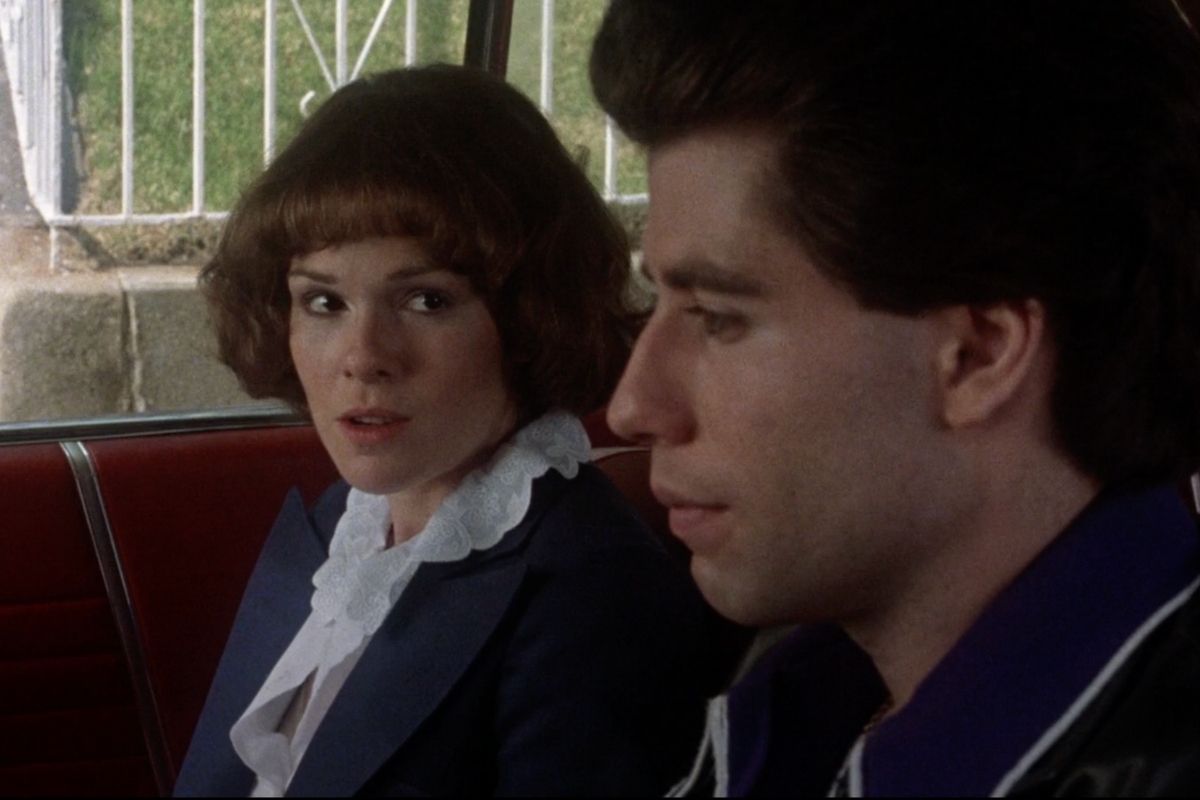 Saturday Night Fever premiered in 1977 and immortalized the colorful New York disco craze, put the Bee Gees on the map, and turned the young John Travolta into a groovy Hollywood A-lister. Its place in cinema history is unquestionable, from that spirited intro strutting down the streets of Bay Ridge to the final dance-off which popularized white suits and Travolta’s classic “point move.” But in recent years, the movie has been re-examined for its harsh depiction of rape.

Though the film might be remembered for flashy club scenes populated with polyester, the plot takes an eventual dark turn: after Tony attempts to rape his dance partner Stephanie, the hopeless romantic Annette is gang-raped in the back of Tony’s friend’s car… followed by Bobby’s subsequent suicide.

Following SNF‘s release, “Stayin’ Alive” remained at the top of the Billboard charts for four weeks. And surprisingly, the Bee Gees have remarked that it was not written for dancing to at all; rather it is an ode to survival, literally, inspired by the rampant murders of New York serial killer David “Son of Sam” Berkowitz. Robin Gibb has stated that the lyrics are in fact a rumination on the cruelty of urban streets. That gritty musical backstory makes this opening sequence even more potent.

A Tale of Two Assaults

John Badham’s Saturday Night Fever follows the story of 19-year-old Tony Manero (John Travolta), a poor Brooklyn boy who wants nothing more than to dance. Tony’s Italian-American family is overbearing and unhappy. He works a dead-end job at the local paint store. But he lives for those hot Saturday nights spent swinging on the disco club dance floor. Tony and his friends, Joey, Double J, Gus, and Bobby C., frequent an otherworldly joint aptly called 2001 Odyssey. At Odyssey, the gang is hot stuff — especially Tony. A local girl Annette (Donna Pescow) adores him openly, and though they dance together briefly Tony quickly ditches her in favor of the elusive Stephanie (Karen Lynn Gorney). Together, Tony and Stephanie begin preparing for the big dance contest. But the complicated tale that follows is not the love story that viewers — or Tony — might expect.

Compared to Tony’s jackass friends, Stephanie is mature, even glamorous with her ritzy Manhattan job. Tony falls for her but she continually rebuffs his advances. Meanwhile, Annette pops up consistently, reminding Tony that she’s more than willing to “make it” with him. Pescow’s vulnerable performance, so wide-eyed and earnest and desperate, makes Tony’s flat-out rejection tough to watch. He remains fixated on Stephanie.

During their ultimate dance competition duet, Tony and Stephanie kiss and win the contest. Then all hell breaks loose. Tony realizes their success was unfair, saying the judges were racist against the Puerto Rican runners-up, and takes his frustration out on Stephanie physically. He tries to overpower her in the backseat of Bobby’s car but Stephanie fights off the would-be rapist, pushing him until he relents. She runs away. Then Tony moves up to the front seat of the car. Joey takes a drunken Annette into the backseat, has sex with her, then switches places with Double J who proceeds to violently rape the girl while she cries. The act unfolds in full, the camera cutting between Annette’s teary face and Tony’s distracted expression in the front seat. He does nothing, utterly complicit in the gang rape of his close acquaintance.

When Double J is done, the friends partake in their weekly acrobatic antics on NYC’s Verrazzano Bridge. But this time, a dejected Bobby C. tumbles down to his watery death. The shock forces Tony to confront his own violence — but only in service to Stephanie. He arrives at here apartment at dawn to apologize. And when she opens the door, she casually delivers a shocking line of dialogue: “First time I’ve ever let a known rapist into my apartment.” They agree to remain friends.

“The assholes I hang out with. I can’t believe them sometimes. Everybody’s got to dump on somebody! Nobody can do it straight, right? My pa gets dumped on at work, so he dumps on my mother. The sp**s dump on us, so we have to dump on them. Everybody’s dumping on everybody. Even the humping is dumping.

During the late seventies, Paramount Pictures released a PG version of Saturday Night Fever which cut down on the film’s nudity, swearing, and deemphasized the graphic rape of Annette. In doing so, critics remarked that the edited version had little emotional power. After all, Saturday Night Fever positions rape to dig into the central young man’s aggression and generational anxiety. Whether or not that’s tasteful is up to you. But the gut punch of it all remains key.

Annette and Stephanie are both “nice girls.” Annette, however, is more outward and less poised. For that openness, she’s punished severely: rebuffed by Tony, used by Joey, and raped by Double J. Even Bobby C., a minorly sympathetic character, calls her a “dumb b*tch.” (Tony calls her a c*nt.) Stephanie, meanwhile, maintains her ground. She is more respected by the group and escapes the final event decidedly less traumatized and brutalized than her working-class foil Annette.

In the past few years, discussions about the double rape scene in Saturday Night Fever have been trending online. Certainly, Tony is no enduring hero in the story. Though he’s redeemed somewhat through Stephanie’s continued friendship, his gang’s despicable behavior and dirty language is shown full force with lingering, unforgettable shots of Pescow’s tortured face. Depending on how you interpret Annette’s plight today — as the true victim or as discarded collateral damage for Tony’s “growth” — affects whether or not SNF is what today’s audiences would call “problematic.” Then again, both can be true.

The women of Saturday Night Fever are indeed staying alive — but barely.

The R-Rated vs. PG Version

I get the idea, but Saturday Night Fever has about 200x more rape that #Hairspray or #Grease. pic.twitter.com/bu3GqpErmx

Saturday Night Fever. My mom took me to see it when I was 6. Gang rape and death by falling from a bridge.

Uh, yeah, so it turns out that 'Saturday Night Fever', a movie where John Travolta swears a lot, is a racist, seriously tries to rape his crush, and whose friend commits suicide by jumping off a bridge may not be the delightful Disco filled romp we remember pic.twitter.com/ILN9fh4xqZ

Even before the 80s. I remember being really upset at the rape scene in Saturday Night Fever (1977). I was way underaged but got in anyway. I hadn't been raped (yet) but had been assaulted.

WATCH: ‘Grease’ is Being Slammed as “Racist, Rapey, Homophobic, and Slut-Shaming”