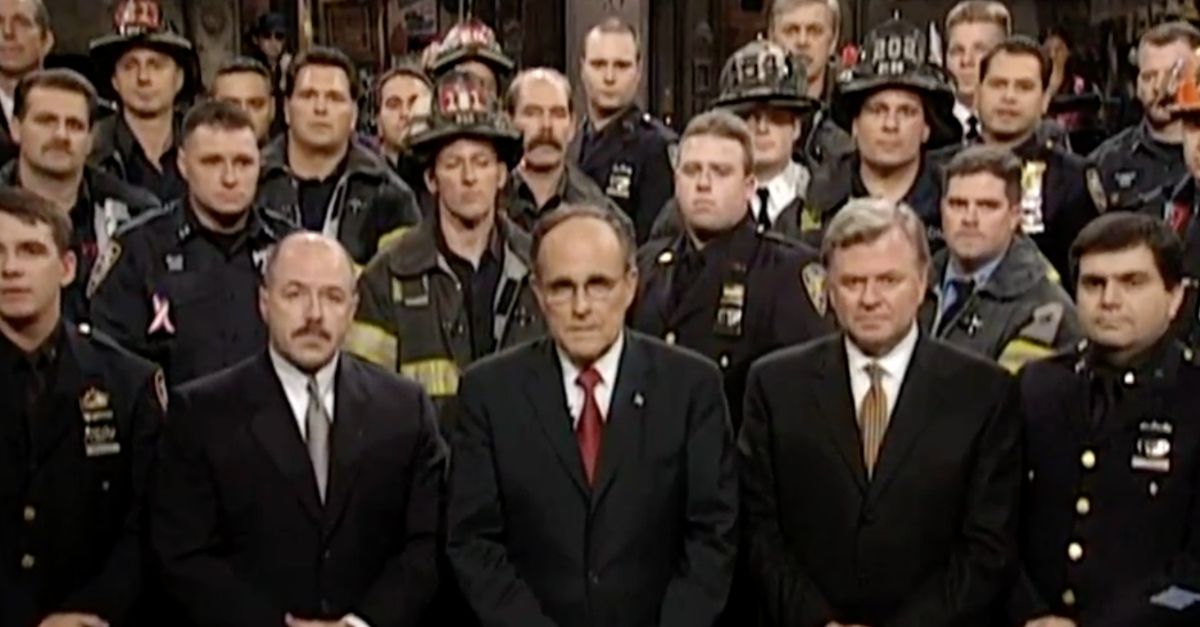 via NBC
via NBC

NBC’s Saturday Night Live aired the first episode of its 27th season a little over two weeks after the September 11th terrorist attacks on the Twin Towers in New York City, New York. The world had come to a stop, processing what had just happened, with everyone grieving the losses of the many American lives from the horrible tragedy that will forever haunt the country. And we remember the speech former New York City Mayor Rudy Giuliani gave to open the show.

SNL is that tv show that is known for having different celebrity guests hosting each episode, accompanying the rest of the cast members in hilarious skits, sketches, and parodies throughout the rest of the entirety of that night’s show. But the first show after 9/11 was obviously going to be different. With a more somber and haunting atmosphere, it would be one of the more chilling show openings to date.

Normally, the episode starts with a skit that features the celebrity guest, leading into the show’s live opening where the guest host gives some sort of hilarious monologue. However, the first shot of this episode showed Mayor Giuliani with rows of first responders in uniform behind him, filling up the entire screen. These were firefighters and police officers who were just at Ground Zero to help efforts in risking their own lives to save the others that they could.

This wasn’t going to be the typical stand-up sketch comedy or sketch show. With all the people on stage wearing serious expressions, the audience immediately started cheering and applauding to honor these heroes for their efforts after the former mayor was introduced.

Mayor Giuliani delivered a bold, but blunt, speech about the realities of the blow 9/11 had on not only New Yorkers, but also all the people of the United States. But his speech wasn’t centered on mourning as he continued on about choosing to push away fear, speaking for the people of New York City in saying that they choose to, “live in freedom.”

The screen cuts to musical guest Paul Simon as he sings “The Boxer,” and while he sang, the camera canvased over the faces of the first responders as the proudly stood tall on stage, still wearing those hard expressions. After he finished, Lorne Michaels, producer of SNL, joins the mayor on stage, thanking everyone for attending the show. Mayor Giuliani thanks Michaels and continues his speech, stating that “having the city’s institutions up and running sends a message that New York City is open for business,” and that “Saturday Night Live is one of our great New York City’s institutions, and that’s why it’s important for [them] to do [their] show tonight.”

And in an encouraging response to not showing fear after the tragedy that had just happened, Michaels breaks up the serious atmosphere with a true SNL line, asking, “Can we be funny?” to which Mayor Giuliani comically responds, “Why start now?”

The mayor proceeds to begin the show as everyone does with the staple statement, “Live from New York! It’s Saturday Night!”