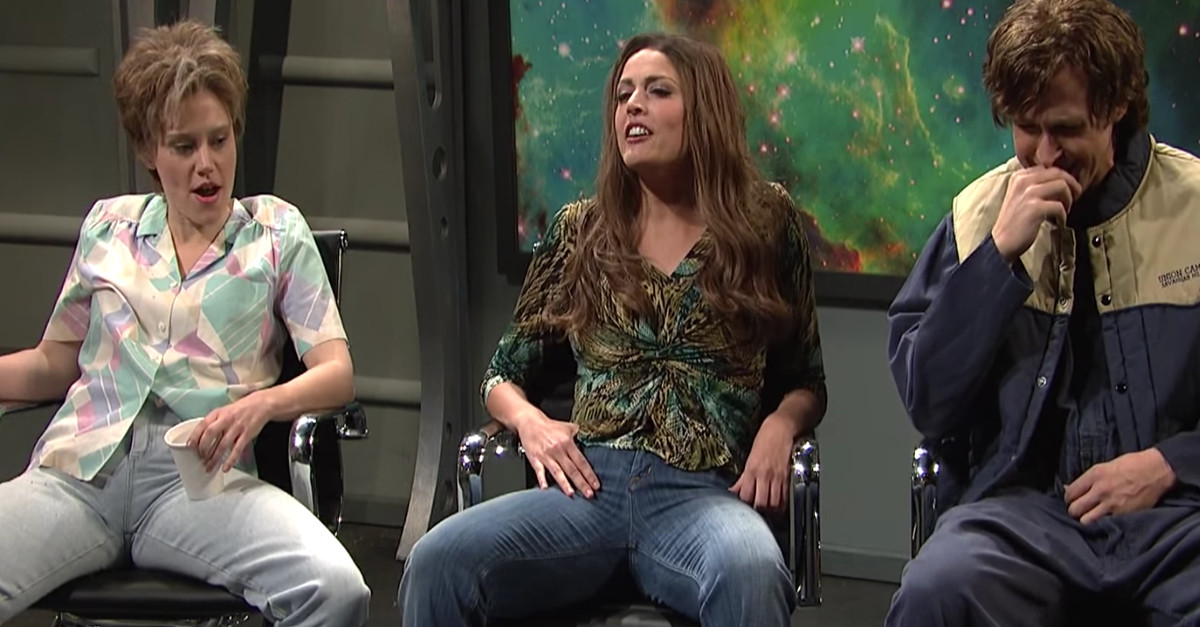 Few things send audiences into greater hysterics than when NBC’s “Saturday Night Live” performances remind us of the dangers of live comedy. The cast of Saturday Night Live is known for breaking character during their skits because the characters they’re acting out are just the funniest. Instead of being frowned upon, laughing during a scene has produced some of the most beloved moments on the long-running comedy sketch show.

This was probably one of the funnier sketches in SNL history. In 2015, in an SNL skit called “Close Encounter”, host Ryan Gosling, Kate McKinnon, and Cecily Strong play small-town southerners who come in contact with a UFO. The basic premise is this: three average looking, everyday people become alien abductees. Two had a transcendent, beautiful experience, but for Kate’s character? Well, maybe you should just see for yourself.

Kate McKinnon is known for her fine portrayal of weirdos, and this one was a real winner. She appears disheveled, refusing to let go of her cigarette while recounting what is supposed to be an alien abduction. But by the time she starts talking about getting “her knockers gently batted around,” everyone else in the sketch can hardly hold in their laughs. Ryan Gosling couldn’t control himself at all. At one point Gosling was laughing so hard, Strong said (still in character), “He?s cryin’.”

Gosling was a real favorite of the writers, who loved his reactions to Mckinnon in rehearsals. It was his first time hosting SNL, and in an interview, one of the writers said, “We were charmed. When Gosling smiles, the world smiles with him”.

Fast-forward to 2017, and we get a sequel SNL skit to “Close Encounter” called “Another Close Encounter.” And Kate Mckinnon does not let down in this one. In fact, she gets even funnier. Bringing back Ryan Gosling and Cecily Strong in this one, Mckinnon keeps up the crazy antics by again adding a different perspective to yet another alien abduction.

The government is interviewing the alien abductees once again, and Mckinnon steals the show by getting a little handsy in this one. As they recap their second alien abduction, Gosling and Strong talk about the same “transcendent experience” they had the first time. But Mckinnon goes all in with the most ridiculous nicknames for unmentionable body parts, while actually grabbing at Gosling to help describe the “close encounter” she had with these aliens.

And as predicted, our charming Ryan Gosling is seen not being able to keep a straight face. In fact, all the SNL cast members in this skit couldn’t keep a straight face. Mckinnon nails being the funniest alien abductee once again, and the skit didn’t even really have a different story from the first time.