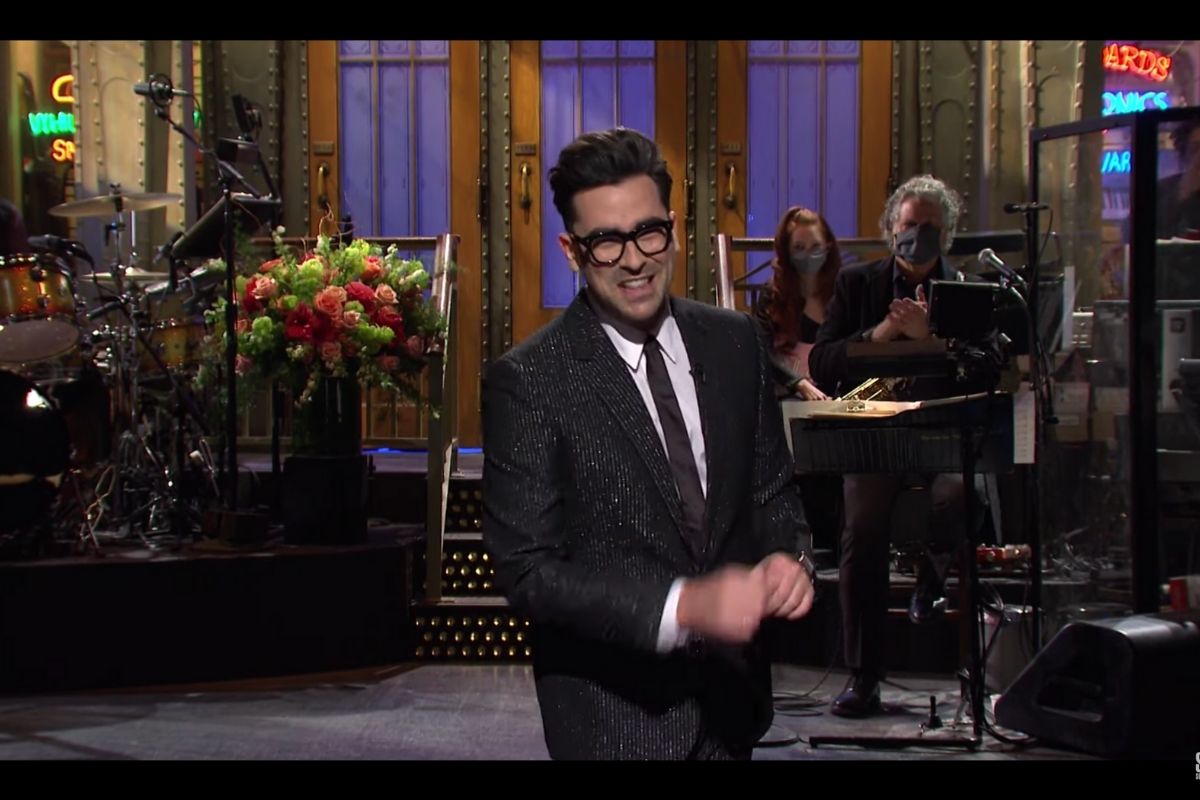 2020 sucked for just about everyone but Dan Levy. As the creator, writer, and star of Schitt’s Creek, Levy’s kooky Canadian comedy found a massive audience through Netflix and swept at last year’s socially distant Emmy Awards. Levy himself won Emmys for acting, writing, and directing the show while all three of his major co-stars, Catherine O’Hara, Annie Murphy, father Eugene Levy, also took home acting trophies.

To top it all off, Schitt’s Creek — which aired its final episode last April — won the coveted title of Outstanding Comedy Series. Suffice to say, the younger Levy is now a certifiable star. And what’s the first stop for newly minted A-listers? Hosting Saturday Night Live, of course.

Taking on the format of the NFL Super Bowl LV pre-game show, the cold open asserted this episode’s staunchly apolitical tone. Headed by Kenan Thompson as host James “No, Not That One” Brown, the talk show round table featured five sports commentators, and when Mikey Day (playing Phil Simms) asked “Do we need this many hosts?”, I had to agree. There were definitely a few chuckles sprinkled throughout this maximal cold open, which attempted to cover not only the pandemic but also the vaccine rollout and the Super Bowl. But altogether, it was a tiring start.

Best lines? “We were able to get through the season with only 700 cases. Hooray us,” and “The game is also being simulcast on the Bravo Network where it’s hosted by Andy Cohen, and instead of the Super Bowl, it’s called Old Hag Vs. Young Slut.” The pandering Cheez-Its commercial was also pretty good.

After last week’s solid John Krasinski monologue, Dan Levy had some big shoes to fill. Unlike Krasinski, Levy has not been a familiar television face for more than a decade. Like many first-time hosts, Levy relied on the bells and whistles of the NBC production to sell himself. After a brief introduction, Levy left the stage for a televised backstage tour of 30 Rock that leaned on pandemic tropes: dramatically misty sanitization stations, cumbersome face shields, and plastic hamster ball body bubbles.

There was also one major cameo: Dan Levy’s dad Eugene, the stalwart character comedian, appeared in a glass isolation box having just flown from Los Angeles to New York City. The father-son banter reflected their obviously shared sense of sarcasm which so colored six seasons of Schitt’s Creek. (Personally, I would have liked to see cuts to the elder Levy throughout the SNL show, watching with the audience in his isolation box.)

The Weekend Update was the funniest part of this week’s show. Check out both halves of the newsreel here. Best line: “Former social media influencer Donald Trump.” Second best line, from a deadpan Michael Che: “A video of [Morgan Wallen] surfaced of him using the N-word. Hmm, wonder who he learned that from.” Watch the clip below to find out who…

“Universal Tram” was the only sketch that truly flexed Dan Levy’s comedic chops. Although he blended respectably into various scripted characters, in Universal Tram, Levy’s rogue, vulgar tour guide-in-training felt like an original creation. Ego Nwodim as the unenthused tram driver was also a treat and Bowen Yang who appears, inexplicably, as Gru from Despicable Me. Yang has really proved himself this season as a surprising impersonator. His impressions aren’t necessarily spot-on, but they’re usually ridiculous fun.

This was probably the most relevant sketch this week, in terms of both the pandemic and the Super Bowl. Dan Levy, Beck Bennett, Kyle Mooney, Chris Redd, and Heidi Gardner all appear as part of a self-congratulatory Covid pod. Their banter feels relatable… until further details reveal how disastrously unsafe the members of this group have actually been. Convening for a Super Bowl Party turns into a PSA of sorts, with a surprise visit from Dr. Fauci (Kate Mckinnon) and, again inexplicably, Bowen Yang as “Gangnam Style” superstar Psy.

Kate Mckinnon, Bowen Yang, Dan Levy, and SNL rookie Punkie Johnson (all of whom are actually gay) star in “It Get Better,” a spoof on Dan Savage’s outreach nonprofit for LGBTQ youth. All four players explain that while it does technically get better, adulthood brings its own sets of challenges, and actually… no, no it does not get better. Bowen Yang’s character’s personal account of being cyberbullied by the highly “organized” gay community is especially hilarious.

It was a big week for fake commercials on SNL. Although the riffs on masculinity in “Men’s Cosmetics” were not particularly fresh, it was still a cute collaboration between cast members. And the only Pete Davidson appearance in this week’s episode… so had to rank it for that alone.

SNL‘s steamy Zillow ad has already gone viral. Taking on the imagery of a phone sex hotline, this digital short lampoons people in their late 30s’ obsession with the eponymous real estate website. The conceit was pretty clever, but it’s Cecily Strong’s breaking the tone with her performance as an irritable broker.