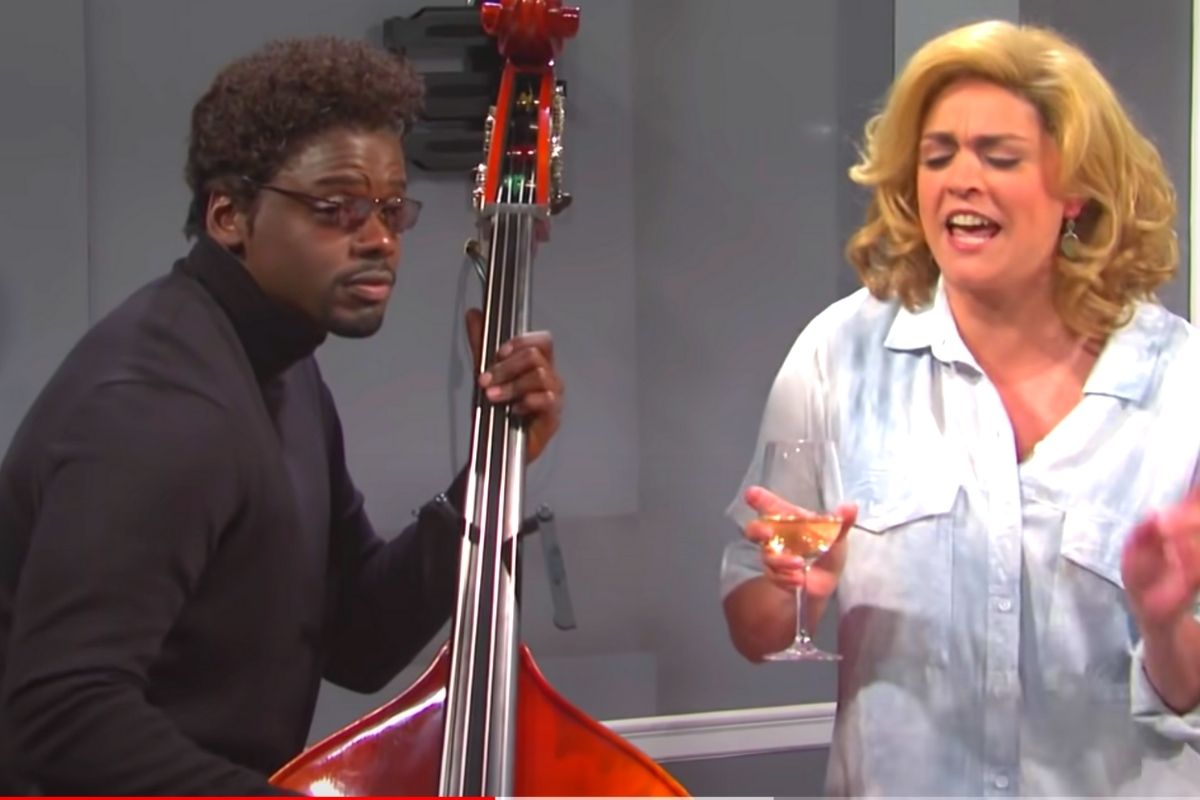 As I mentioned last week, SNL has been leaning heavily on the talk show format. (Without Donald Trump’s weekly antics, I suppose, the path is less clear.) This time, Chloe Fineman’s Britney Spears impersonation was revived to discuss the week’s news: Lil Nas X’s new Satan aesthetic, the cancellation of Pepe Le Pew, and Matt Gaetz’s… full-on “hot mess” of a scandal.

First Chris Redd appeared as a spirited Lil Nas X, challenged by Spears to give God (Mikey Day) God a lap dance; he does. Kate Mckinnon nailed it as a smoky, French Pepe Le Pew. And finally, Pete Davidson popped up to portray disgraced Florida representative Matt Gaetz in a giggly, semi-stiff attempt to expand his range. (Keep trying!)

If you didn’t recognize Daniel Kaluuya from Get Out, Black Panther, or Judas and the Black Messiah, perhaps you were introduced to the rising star during his Golden Globes acceptance speech last month — when the sound cut out on Zoom. The awkward moment was acknowledged in Kaluuya’s monologue (“I thought I was in the sunken place!”) along with Kaluuya’s black and British heritage. Speaking of Prince Harry and Meghan Markle’s baby, Kaluuya joked that he’s what the royal family was afraid Archie would look like. Kaluuya also had his own sharp one-liner about American racism:

?British racism is so bad, white people left. They wanted to be free ? free to create their own kind of racism. So that?s why they created Australia, South Africa and Boston.?

He closed out the monologue touchingly, revealing to the audience that his first time acting was in a play based on Kenan & Kel — and now here is performing alongside the veteran cast member himself, Kenan Thompson.

Most write-ups have focused on this week’s obligatory pandemic sketch, “Vaccine Game Show,” in which host Daniel Kaluuya implores his African-American relatives to get the Covid vaccine. “Will you take it?” he asks, again and again. But this week’s show felt strongest in the least topical bits. My favorite part this week was a timeless dunk on creative writing majors in which Kaluuya and Ego Nwodim play strict African parents — who do not want their son to study poetry. (Full disclosure: I was a creative writing major who studied poetry.)

For some absolutely random reason, SNL has finally tackled the funniest video on the internet: Kim Cattrall scatting. Watch it below.

As you can see, Saturday Night Live transported the inexplicable scenario to a living room birthday get-together which poked fun, primarily, at weird family members. Though not a thing needed to be changed from the original video, I suppose it’s not a timely reference. But don’t try to tell me “Half Brother” is not riffing on the Cattrall video — just like at Cecily Strong’s blonde wig! Her button-down shirt!

Taking inspiration from the shrimp-tail-in-the-Cinnamon-Toast-Crunch scandal, this YouTube send-off by Kyle Mooney and Daniel Kaluuya is good, crude fun

Like Harry Styles’ pitch-perfect, edgy Sara Lee bit, in “Beanie Babies” Daniel Kaluuya is hired to write cute captions for the little toy tags. Obviously what follows is not professional. Though not as freaky as “Sarah Lee” was, I’ll never tire of Bowen Yang as the beleaguered executive.

This sketch was not technically as tight as this week’s “Frat Trip” or “Scattegories” (the perfect example of how Kate Mckinnon alone can carry a weak premise) but I had to acknowledge its unwieldy chaos. Watch the four-minute clip, and you’ll be wondering how the hell David Beckham became involved and whether or not Cecily Strong is really allowed to get up in that position on NBC… Plus, Beck Bennett sashaying away from the table gets me every time.

In the funniest segment from this week’s Weekend Update, Colin Jost interviews the Guy Who Just Bought a Boat (Alex Moffat) on dating post-Covid. What follows is a cringey slam poem of disgusting proportions.