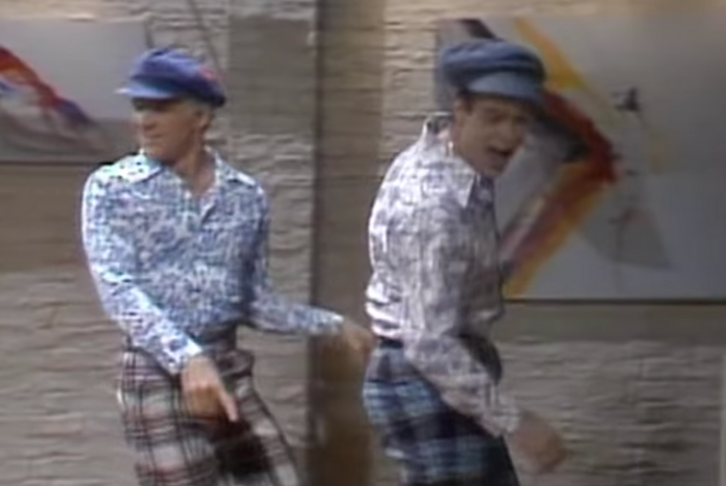 Would America be America if we weren’t constantly making fun of and consistently appropriating other cultures? I think not. The same goes for this Saturday Night Live sketch “Two Wild and Crazy Guys,“… about two guys who aren’t actually that wild and crazy. But they think they are. So, they make it their catchphrase. One thing they do get right is the fact that they are the Festrunk brothers from Czechoslovakia living in New York. Set during the height of disco days in New York, the main factor thing that makes this skit humorous is just that Steve Martin, Dan Aykroyd, and later John Belushi, some of our favorite Saturday night sweethearts, portray foreign men, poking fun at their lacking grasp of the English language and walking funny in checkered pants.

The Wild and Crazy Guy skits with steve and Dan as Georg and Yortuk Festrunk usually revolve around them hanging in their apartment, in checkered pants that ‘show off their bulges’ and trying to get “foxes” or “chicks” to come to their apartments to “make the sex”… (or whatever way Americans think Czech people would say it). But their culture-shocked, checkered pants wearing asses don’t really know the American way and tend to scare off all the women they meet, usually when they blurt out things like “Big, American breasts.” Yep, that happens. Jane Curtin and Gilda Radner’s characters are two sisters from Croatia, who bring their uncle, played by John Belushi, on their double date in another skit.

The Festrunk Brothers are Ladykillers

Of course, there is also the expected racial joking in the mix when Garrett Morris, playing Cliff, comes in the scenes. Cliff is seemingly the only friend of the wild and crazy guys Festrunk. We witness him being calling him a ‘soul brother’ (probably well meaned), and some visiting ‘chicks’ wanting to see him without any pants because, well, I’m sure you know; it’s what you’d expect. Watch below for a chuckle or two, depending on your level of cultural insensitivity.

As the ‘Wild and crazy guy’ skits died out, they were replaced by similar yet memorable SNL characters, The Roxbury Guys. In a parallel plot, Doug and Steve Butabi were brothers called the Roxbury Guys. They were played by cast member Will Ferrell and Chris Kattan. These episodes featured other favorites like Father Guido Sarducci, on the Weekend Update, and Ed Grimley, played by Martin Short, another SNL cast member.

The stars of this SNL skit later went on to help shape pop culture and comedy in sizeable ways. Comedians of the 1980s were in their heyday in the entertainment industry in Hollywood like never before. Hopefully not for the last time. Journalist Nick de Semlyen wrote Wild and Crazy Guys. Acts like Eddie Murphy, Bill Murray, Chevy Chase, Steve Martin, and John Belushi starred in Hollywood’s favorite films, including From the National Lampoon creation, Animal House, Ghostbusters, Beverly Hills Cop, Caddyshack, and The Blues Brothers.

The wild and crazy guys skit do live on. Steve Martin named his comedy album “A Wild and Crazy Guy” as the phrase was picked up so heavily in pop culture. His album was also well received.