Remember When Steve Irwin Brought a Crocodile on ‘The Late Show With Conan O’Brien’? 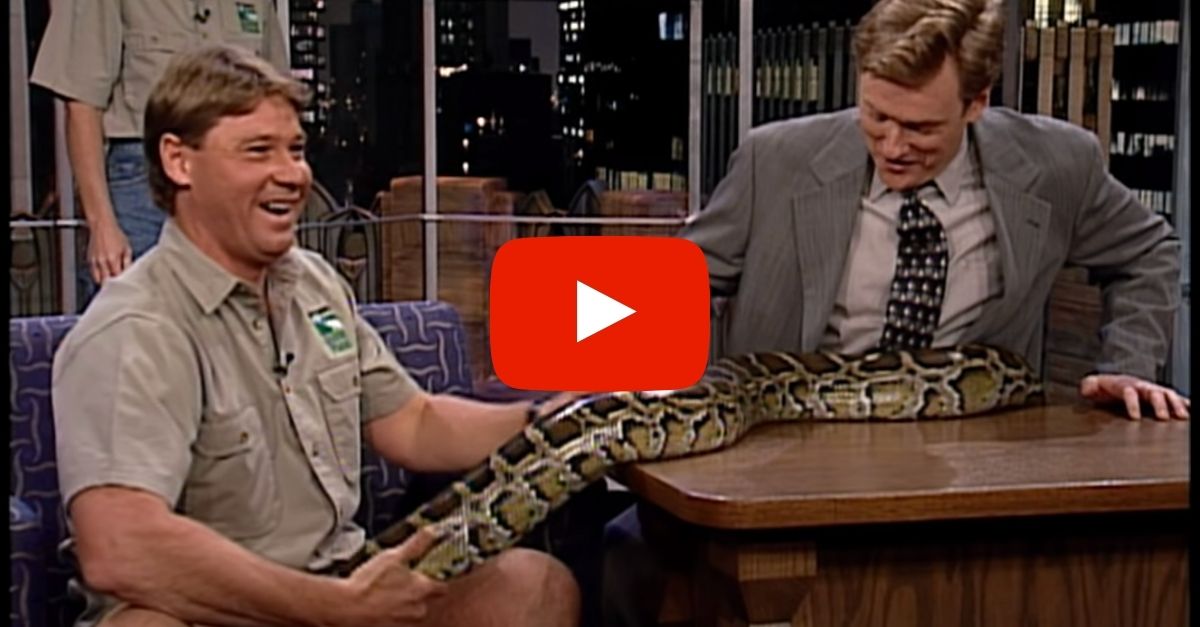 All right, I’ll confess, I’m a sucker for late-night TV. There’s just something I love about people talking about the projects that they’re in or have partaken in which they are so proud of. It’s so refreshing to see, especially the older late-night shows. As I was scrolling through The Tonight Show Starring Jimmy Fallon’s YouTube I found one of Steve Irwin’s son Robert Irwin, in which he brings all sorts of reptiles and other animals on stage with them. Obviously, Fallon is terribly scared, as well as guest  Kevin Hart, which makes everything better.

That being said, I have another confession. I love anything to do with the Irwin family. I have followed all their stories, watched their shows, and I have kept tabs on their personal lives, especially the one that was just announced about his daughter Bindi Irwin and Chandler Powell’s pregnancy. It’s a little weird, I know. But hey, we all have our favorite celebrities out there. So as I was scrolling through more YouTube videos I found this hilarious and aspiring viral video of Steve Irwin on The Late Night with Conan O’Brien.

What was remarkable about this clip is that Steve is doing the same thing that Robert is doing now. So it’s kind of like a Deja Vu, a little father like son duo, which I found incredibly touching. One, because I had no idea that Steve Irwin did live TV shows, and two because it’s so great to see that his legacy is still alive and his children are basically following his footsteps.

In the interview, the Australian talks to O’Brien as the wildlife warrior brings out a variety of animals which include a snake-necked turtle, a bearded dragon, a Burmese python, and yes, a crocodile. Because you know that the crocodile hunter needs to live up to his legacy. The interview starts off with the late Steve Irwin’s talking about his work, and personality is so contagious that O’Brien even gets shocked at how energetic he is. Because well, you can clearly hear the excitement and passion in his voice. You can tell this man was ready to scare the living bejesus out of O’Brien.

And although he wasn’t that scared, he did have a little freakout moment here and there. What I love the most about this whole clip both the croc hunter and his wife Terry Irwin were together as a team. As she pops up to say hi, he introduces her as his “gorgeous and courage wife.” Which in all honesty, we can see she is. She clearly continued his legacy and made sure her kids never forgot about how Brave their father was. The couple went on to film several shows about their work with animals including The Crocodile Hunter, Croc Diaries, Croc Files, New Breed Vets, Ghosts of War, and Bindi: The Jungle Girl.

After his death in 2006 due to a stingray attack, Bindi Irwin, and Robert Irwin, and their mother Terri continued his legacy at the Australian Zoo Wildlife Hospital which was dedicated to Steve’s mom back in 2004. The Australia zoo continues to rescue, rehabilitate, and release over 700 native Australian animals every year. The family now stars in their own reality show, Crikey! It’s the Irwins on Animal Planet which follows their journey. It’s families and stories like these that make me so happy. The magic of the internet, folks. Here are some other few clips that I saw roaming around showing Steve Irwin’s true personality. It’s okay if you cry, I had a few tears here and there too.

Watch: Steve Irwin?s Children Have Saved Over 90K Animals From the Australian Wildfires