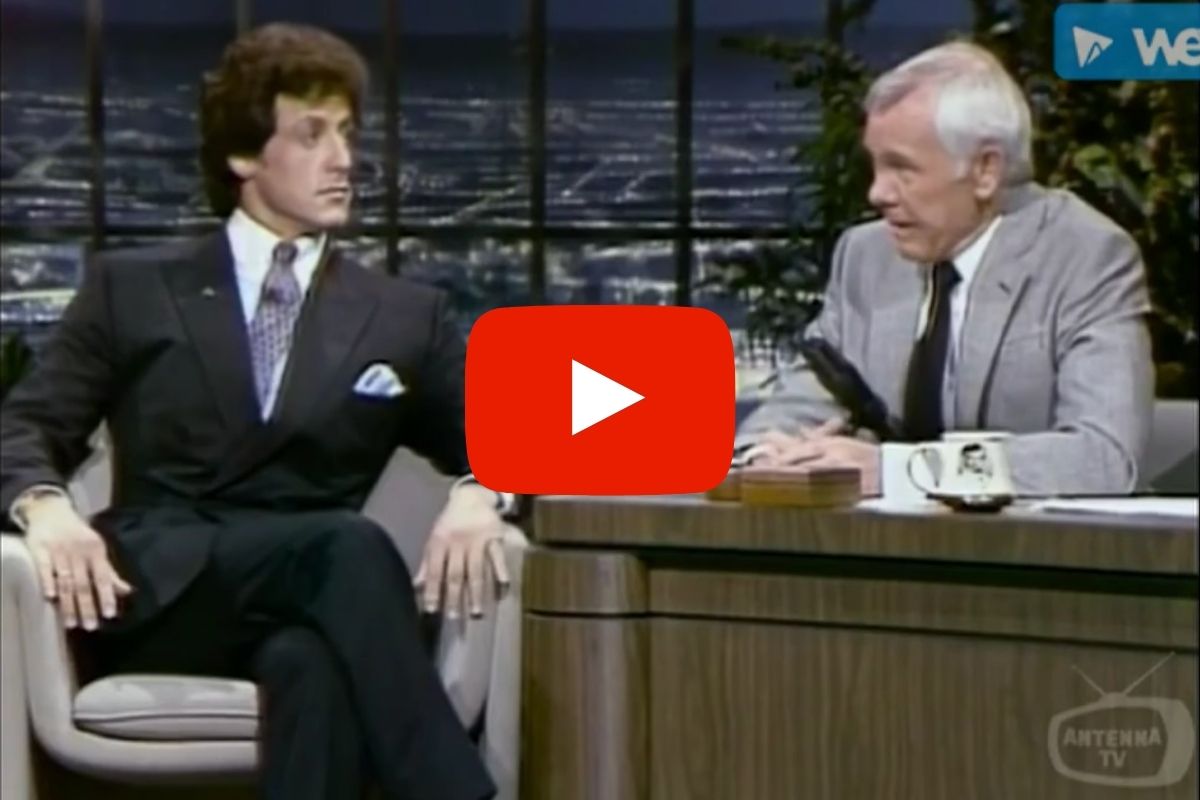 Sylvester Stallone is an action superstar who defines “badass” in our collective imagination. He’s played a heavyweight champion, a badass lone wolf soldier, a demolition man, an elite mercenary — and does most of his own stunts. So it seems like Stallone would be a pretty intimidating father figure. And the actor does indeed have a complicated family life.

But long before Stallone found longtime happiness and had three daughters with his current wife Jennifer Flavin, the Rocky actor had two sons. The oldest was the late Sage Stallone. And while promoting Rocky III, Stallone introduced a six-year-old Sage to the world on The Tonight Show Starring Johnny Carson.

Then, in 1974, Sylvester Stalone gained Hollywood recognition for his role as a greaser in Lords of Flatbush. (Having previously acted in the play, Stallone was tapped when the story moved from stage to screen.) And that same year, a televised boxing match gripped the nation: Muhammad Ali vs. Chuck Wepner. The fighters went 15 rounds until they were so battered they could hardly stand up. The glorious duel gave Sylvester Stallone an idea for his own movie. Within 48 hours, he’d typed up a full script at the public library. Named after its unlikely hero, this masterpiece was called Rocky.

Rocky was more than just a boxing movie. It mastered the conventions of an epic, romantic sports story while coasting on the raw charisma of its unusual leading man: Sylvester Stallone. (Rocky also birthed the most parodied, iconic training montage of all time.) The actor was instantly recognizable for his chiseled, hulking frame and deep, slurred voice. He turned Rocky Balboa from a possible cliche into a sympathetic hero. A box office success, Rocky was launched into a full franchise with seven movies. Two untitled Rocky projects are still forthcoming. The timeless series was revived in 2015, with Creed, which starred Sylvester Stallone as the trainer for Michael B. Jordan’s character, the illegitimate son of Apollo Creed.

But long before the franchise was rebooted, Sylvester Stalone made his talk show rounds to promote Rocky III in 1982. This installment picks up after Rocky Balboa wins the heavyweight title. Now famous, Rocky must confront the death of his beloved trainer Mickey. Apollo Creed steps in to train Rocky in a fight against Clubber Lang, and the Balboa-Creed relationship develops as the ultimate frenemies.

Stopping by The Tonight Show in Los Angeles in 1982, Sylvester Stallone brought a special guest along with him: Sage Stallone. Sage was Stallone’s oldest child and one of two sons that Sylvester had with his first wife Sasha Czac. (Stallone would go on to marry Brigitte Nielsen, then Jennifer Flavin in 1997, with whom he has three daughters.)

Sage Stallone clearly shies away from all the attention. He hides behind his father’s leg as the two of them walk on the NBC stage. After shaking hands with Johnny Carson, Sage’s moment in the spotlight ends quickly — and awkwardly. Stallone carries his son away in a characteristically gruff manner, lifting him from under his arms. After Sage’s exit, Stallone reveals that Sage used to really think his dad was a boxer. But now, he was mostly interested in the comedian Steve Martin. The celeb kid grew up to enter show business, like his family members. He appeared in Rocky V and in 2006, wrote, directed, and produced his own short film, Vic. Tragically, Sage Stallone died of coronary artery disease in 2012. He was only 35 years old.

During the course of the interview, Sylvester Stallone calls the story of Rocky III “a metaphor for the way that people must… constantly alter their philosophies to stay one step ahead of the game.” This included a vast physical transformation for Stallone, who lost 30 pounds for the role and spent nearly a year with professional trainers. “Professional torturers,” as he calls them. In this Rockyr film, Stallone tried bringing in real boxers and teaching them to act a little, as opposed to buffing up veteran actors. But this new idea led to some much more painful fighting sequence. Stallone remembers at one point, his boxing partner looking at him “with a voracious hunger like I was a T-bone steak.”

It’s fascinating to look back at this old Tonight Show footage and remember just how much creative control Sylvester Stallone had over the Rocy movies. He was more than just a savage actor; Stallone carried a distinct vision for the story. He appreciated, more than anything, a good oponent. And thus needed a “good nemesis” in every film. In Rocky III, Mr. T was introduced as boxer Clubber Lang. Stallone describes the excitement of discovering Mr. T through his wild fighting antics on TV and thinking “this is my kind of man.”

This insight into Sylvester Stallone’s artistic process sounds worlds away from the “blissful stupidity” which he described when promoting the original Rocky movie with Johnny Carson. Carson, who had just seen the film, raved about the production and called it a “sleeper hit.” Watch this 1976 tv show interview below.

In addition to Mr. T, Rocky III features WWE star Hulk Hogan long before he was a household name. Hogan portrayed the massive wrestler Thunderlip, whom Rocky Balboa takes on in a charity match. Johnny Carson featured the awesome clip (below) in his interview with Sylvester Stallone.