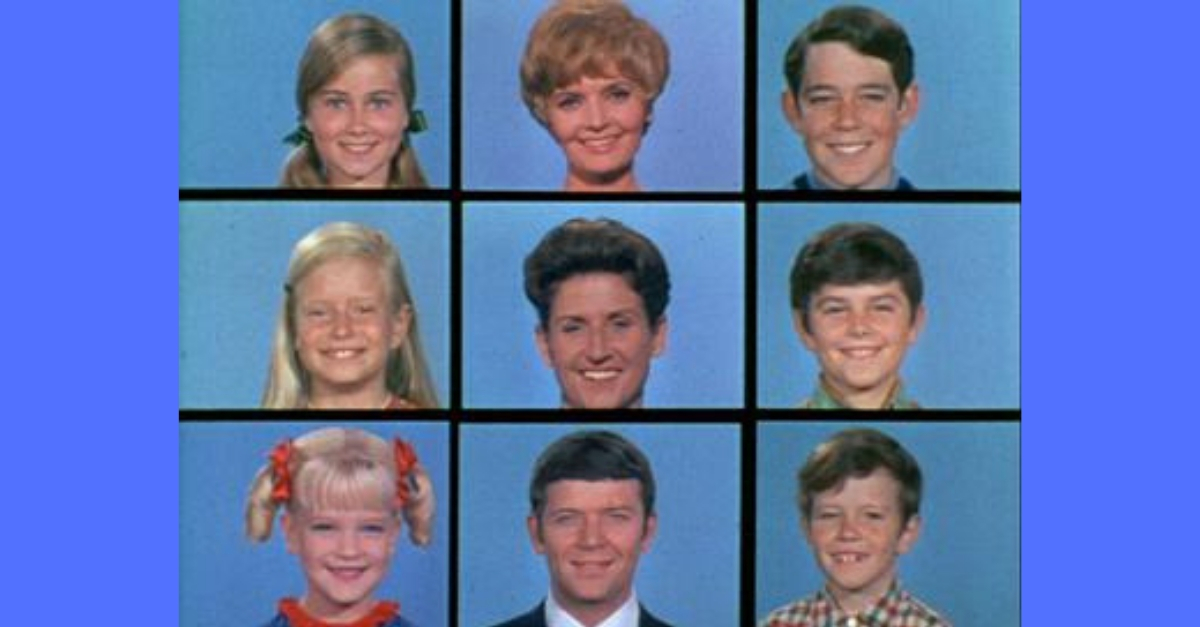 The year is 1969. Gas is $0.35 and the average monthly rent is $135.00. Astronaut Neil Armstrong landed on the moon and Woodstock took place on a farm in New York. Come September 26th, the first episode of the blended family sitcom, The Brady Bunch, airs, setting a precedence of the great American family comedy.

While the show itself wasn’t an award winner during its original run, the show was syndicated, and with it, gained popularity with children and teenagers and went on to become an American icon.

The idea of the show started when Sherwood Schwartz read in the paper that 30% of families are blended, meaning that people are remarrying with children from previous marriages. From there Schwartz created two families who came together. Mike Brady (Robert Reed) is a widowed Architect with three sons, Greg (Barry Williams), Peter (Christopher Knight) and Bobby (Mike Lookinland). Carol Martin (Florence Henderson) is also single with her three daughters, Marcia (Maureen McCormick), Jan (Eve Plumb) and Cindy (Susan Olsen). The families combine and bring on Mike’s live-in housekeeper Alice (Ann B. Davis), to make up the Brady Bunch.

The television show followed the Brady kids and their preteen and teenage issues like sibling rivalries, responsibility, and self-image, making it the perfect show to learn valuable life lessons from.

Jan Brady is sick of staying in the background of her two sisters so she decided to don a (hideous) wig to her friend’s birthday party. In the end, Jan realizes that she needs to be herself, but the fact that this isn’t the first time she has tried to change herself for attention is a bit concerning.

2. Everyone Has a Doppelganger

When Alice leaves for a week-long vacation, her former master sergeant cousin Emma takes over. Spoiler: it’s just Ann B. Davis in a wig, but it does show that everyone has a double somewhere in this world.

Side note: One time when at Disneyland with my family we saw an exact double of my Dad, complete with the same glasses and khaki shorts.

3. Stalking a Celebrity WILL Get You A Date

According to The Brady Bunch, if you are the president of a celebrity’s fan club, they will eventually come to town and take you to prom. Sounds like a pretty good deal to me, especially if it’s Davy Jones.

4. Don’t Play Ball in the House

Carol Brady had one hard rule: no playing ball in the house. When Peter accidentally knocks over her vase, the kids all make up stories about how they personally knocked it over. In the end, Carol drops the glued vase and shatters it.

This rule would have been really nice a few years ago when my sister’s friend broke our glass vase, sending miniature shards all over the room. I ended up getting glass in my foot and had to get surgery to remove it.

5. Family Will Always Be There For You

Family will always be there for you, including the times you have to make a God-awful home movie.

If there was an award for tattle-tailing, it would go to Cindy, hands down. In this episode, the Brady Family continues to tell little Cindy that Tattling will only do harm. She ends up butchering (not sorry for that pun) Sam and Alice’s relationship only for a moment.

7. You Don’t Need To Be A Lawyer To Win in Court

You go Carol Brady! With no lawyers present, Carol pulls the ol’ switcharoo and shows the judge that she is innocent. Can you imagine if we could do that in today’s court of law?

8. There’s an Underground System that All Housekeepers Use

Alice used to end the night by opening the refrigerator and walking inside. If this isn’t proof enough that house staff has an underground network of tunnels I don’t know what is.

Also, can you imagine how nice it would be to live in the fridge? You would never have to leave your bed to get a midnight snack.

9. Never Change Your Hair Before Graduation

Greg Brady figured out the cardinal rule about big events: never try out a new hairstyle right before the big event. No perms the day before prom, no new hairstyle a few days before your wedding and absolutely no hair coloring before your graduation.

Feeling woeful? The Brady Bunch has always found a way to liven up the day with a quick sing-along. The luck these parents had for having 6 children that can all sing.

This article was originally published on December 28, 2018.