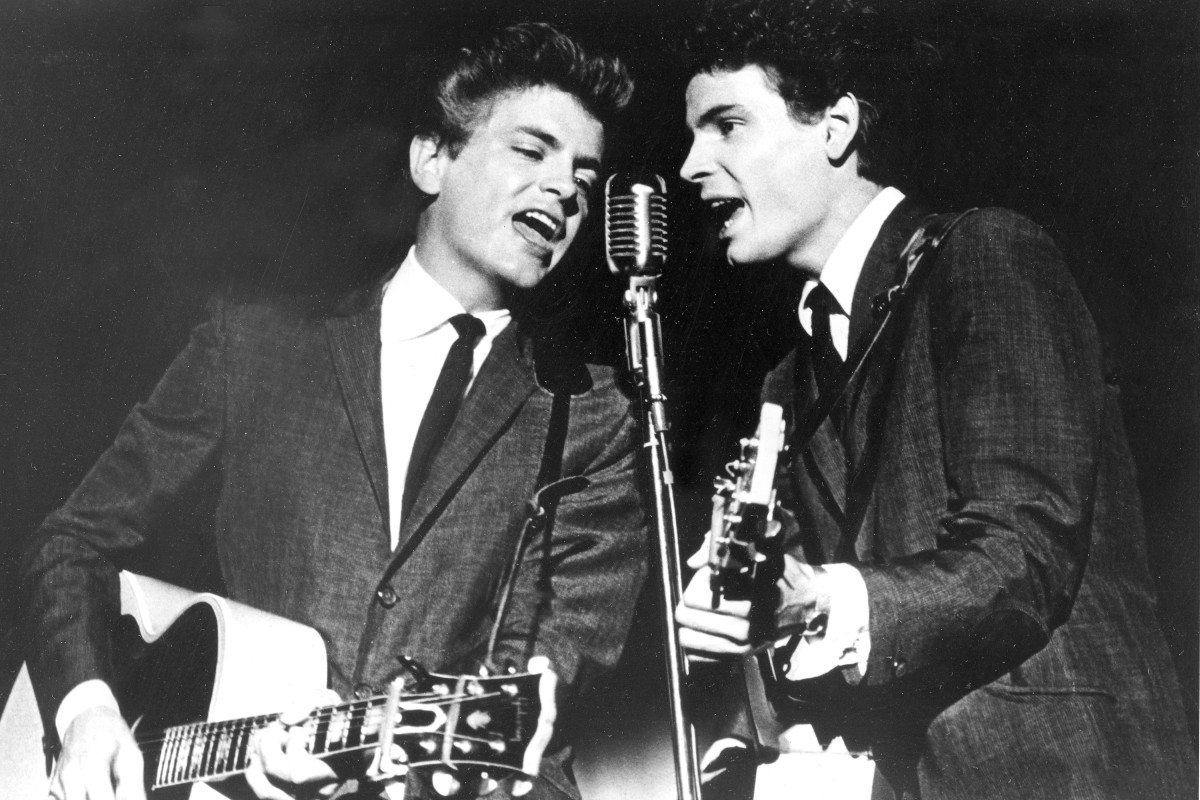 Paul McCartney wrote it best: “The Everly Brothers’ impact exceeds even their fame”. In a tribute to the late Phil Everly in Rolling Stone. Paul revealed that Phil and his brother Don Everley were “one of the major influences” on the Beatles. “When John and I first started to write songs, I was Phil and he was Don.”

And the Beatles weren’t the only influenced by the iconic ’50s rock-n-roll duo. Their incredible blend of Appalachian and rock-n-roll harmonies impacted the music of the Hollies, Simon & Garfunkel, the Beach Boys, the Byrds, and Crosby Stills & Nash. The Everly Brothers’ influence has been long-lasting: In 2013, Norah Jones and Billie Joe Armstrong of Green Day teamed up to pay homage to the duo with a cover album called “Foreverly”.

From their beginnings in 1955 to their notorious onstage breakup in 1973, the Everly Brothers recorded 35 singles that landed on the Billboard Hot 100 list. Here are 12 of the very best of them, in no particular order:

No roundup of Everly Brothers songs would be complete without mention of “Buy Buy Love”, their first-ever and arguably most recognizable hit. As the story goes, more than 30 artists rejected the song before songwriter Boudleaux Bryant convinced the Brothers to record it.  Even though the fellas reportedly felt unenthusiastic about the song, the single rocketed to the top of pop, R&B, and country music charts, hitting the No. 2. spot on the charts in 1957. “Buy Buy Love” was covered by Simon & Garfunkel in their famous album, Bridge Over Troubled Water, and honored in Rolling Stone as one of the 500 Greatest Songs of All Time.

After ending their relationship with the recording company Cadence Records because of a contract conflict, the Brothers released “Cathy’s Clown” — a song about a rough breakout. Coincidence? Probably not. But whether it was a passive-aggressive jab at Cadence Records or not, the song was a hit, topping pop charts in the U.S. and U.K. simultaneously.  Apparently, the vocal arrangements on “Cathy’s Clown” had also a huge impact on one of the Beatles’ first hits, “Please Please Me”.

‘All I Have to Do Is Dream’

Not only was this song a huge commercial success, but “All I Have to Do Is Dream” is considered by Phil Everly to be one of the most important the Brothers ever recorded. On the song’s original recording, country music superstar  Chet Atkins plays guitar. “All I Have to Do Is Dream” was inducted into the Grammy Hall of Fame in 2004 and has been called one of the 500 hundred songs that shook rock and roll by the Rock and Roll Hall of Fame.

Recorded in New York,  “Let It Be Me” was the first song the Brothers had worked on outside of Nashville. The song is an English language rendition of the French song called “Je T’Appartiens”, originally recorded by Gilbert Becaud in 1955. Cool fact: “Let It Be Me” was among the first pop hits ever to incorporate string instruments — the song features eight violins and a cello.

Lighting Express was a top track from Songs Our Daddy Taught Us, an album that pays homage to the Everly Brothers’ father, singer and guitarist Ike Everley. The revolutionary album was among the first rock albums to cover traditional songs, including masterful interpretations of classics like “Lighting Express”, “Kentucky“, and Barbara Allen.

In 1957, the Brothers released their first No. 1 hit on the U.S. singles chart: “Wake Up Little Susie. The catchy song tells the tale of a teenage couple on a date at the movies. After they fall asleep until 4 a.m., the teens feel bad about breaking their curfew. The song’s vague hint at teenage sex caused considerable controversy, and the song was actually banned in Boston at one point.

Turns out, Bird Dog is more than a core-strengthening bodyweight exercise. It’s also one of the Everly Brother‘s more unusual recordings. In the novelty song, the narrator accuses another guy of acting like a dog by prowling after his girlfriend. Despite (or maybe because of?) its quirkiness, Bird Dog soared to the #2 spot on both pop and R&B charts.

When Sonny Curtis of Buddy Holly’s Crickets first showed the Everly Brothers the first verse of “Walk Right Back”, they immediately loved it. They were so eager to record the song, the Brothers didn’t even wait for Curtis to finish the second verse — instead, they just sung the first verse twice. “Walk Right back” was released as a single along with “Ebony Eyes“, and both ended up being chart-toppers.

‘When Will I Be Loved’

Legend has it that Phil Everly wrote “When Will I Be Loved” while sitting in his car outside an A&W Rootbeer joint. The song was supposedly written about Phil’s tumultuous relationship with Jackie Ertel-Bleyer, the stepdaughter of the founder of Cadence Records and Phil’s future wife.

‘Crying in the Rain’

“Crying in the Rain” is the only musical collaboration between two great songwriters: Howard Greenfield and Carole King. Apparently, the Brothers were so happy with the success of the song, they sent the song’s producer, Don Kirshner, a 50-pound pack of peanuts, his favorite snack.

‘Take a Message to Mary’

One of the Brothers’ more underrated tunes, “Take a Message to Mary” is a sad ditty where a man has to cancel his wedding after being thrown in jail. He asks his friend to lie and tell his fiance that he has gone to see the world and encourage her to find someone else. Our favorite part of the song is the percussion, which is provided by a Coke bottle being tapped by a screwdriver.

‘On the Wings of a Nightingale ‘

Remember when we said that the Everly Brothers broke up in 1973? Well, they temporarily got back together in 1984 to record a reunion album, EB ’84. “On the Wings of a Nightingale” was written for the album special by none other than Sir Paul McCartney.  The song has its very own, ’80s-style music video where the Brothers are portrayed working together to fix an old Chevrolet Bel Air convertible.

Watch: The Meaning Behind the Rolling Stones’ “Gimme Shelter”