The Life and Spooky Career of Horror Icon Vincent Price 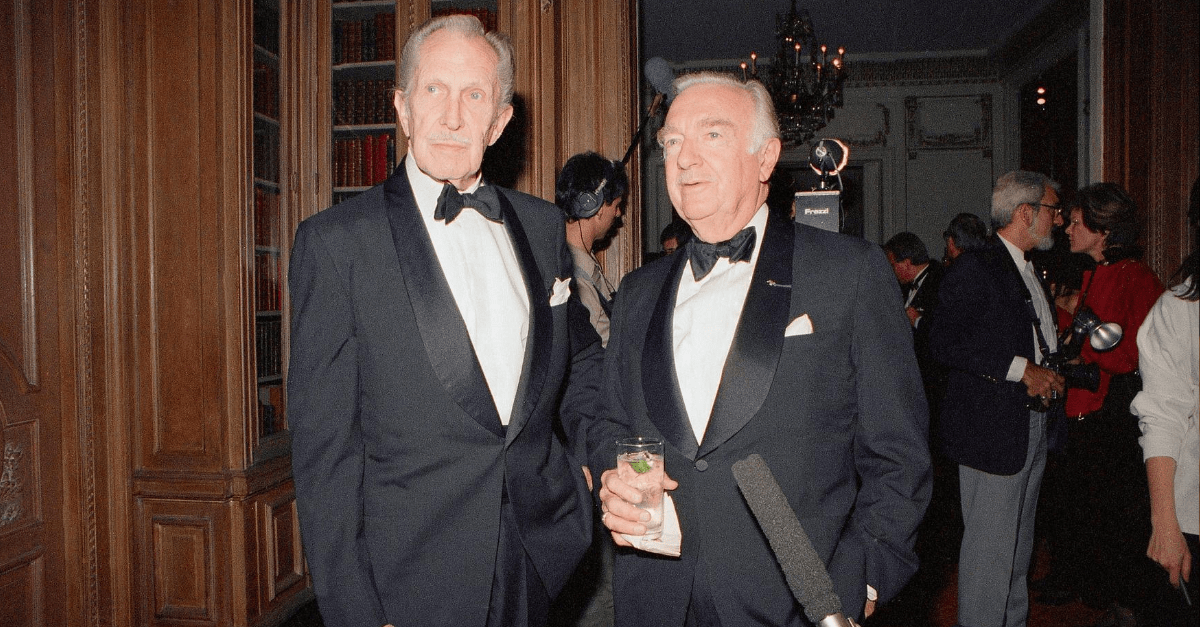 St. Louis-born Vincent Price is known for bringing horror films to life. With a smooth voice and the perfect expression that makes you truly take him seriously as a scary dude. But he wasn’t born scary. Oh no, that was earned.

Vincent Leonard Price was born in 1911 into a family of businessmen. His father owned the National Candy Company, and his grandfather sold baking powder. With his silver spoon, a young Vincent attended Yale in 1933 and became a school teacher right away. When he realized that the government wouldn’t pay for his student’s sharpies, he went back to school at the University of London to get a master’s degree in fine arts. This led him to theatre and acting. His first performance was on a London stage in a production of Chicago.

While he was in New York, he joined Orson Welles’s radio actors. He landed many leads there. In 1938 he went to Hollywood for his screen debut in Service de Luxe. He eventually landed lead roles in such popular films as Private Lives of Elizabeth and Essex, The Song of Bernadette,  The House of the Seven Gables, and Laura. Before he found his niche, he took many roles as romantic leads. However, he felt there was something special about being the evil guy. Especially if there was dramatic or comedic acting uninvolved, his first horror film was The Invisible Man Returns, Followed by Shock, a low-budget film released in 1946.

House of Wax in 1953 was his big break. It was also one of the first films shot in 3D. In House of Wax, Price was a murderous sculptor who runs a wax museum. This film set him apart as a master of horror. His performances brought a resurgence in the genre. He continued in his element in The Fly, Return of the Fly, The Tingler, and House on Haunted Hill thorough the 50s. While he loved horror films, he did act in others, including The Ten Commandments and While the City Sleeps.

One of his most acclaimed pieces of work was Edgar Allan Poe’s short story adaptations. They were directed by Roger Corman, and often starring with the pros of macabre films, like Peter Lorre and Boris Karloff. The Raven, House of Usher, The Pit and the Pendulum, Tales of Terror, The Tomb of Ligeia, The Masque of the Red Death all launched Vincent Price into a spotlight with a cult-like following, especially amongst younger viewers with a hankering for something spooky. With a penchant for gothic imagery, he played in Dr. Goldfoot and the Bikini Machine. Witchfinder General (called The Conqueror Worm) in the United States, was considered one of his most evil performances.

In the ’70s, his popularity rose as he landed cult-favorites like Theatre of Blood and The Abominable Dr. Phibes. At this time, however, Price wanted to start pursuing his other passions, such as cooking and fine art. Price opened the Vincent Price Gallery and Art Foundation at the East Los Angeles Community College. He donated much of his private fine art collection.  In 1972 he wrote a best-seller called A Treasury of American Art. He co-authored many books with his wife.  He also co-hosted several cooking shows.

Vincent price returned to the screen yet again for The Whales of August and Tim Burton’s Edward Scissorhands. After the latter, he was awarded a star on Hollywood Blvd.

His commercials were also a hit. From Sun Country Wine Coolers, The Enchanted world, Polaroid Videocassettes, and Tilex, and so much more!

Watch: Billy Crystal Recalls the Robin Williams Joke About Ronald Reagan That Made Him LOL