Behind “The Notebook”: 10 Facts We Wish We Knew Sooner 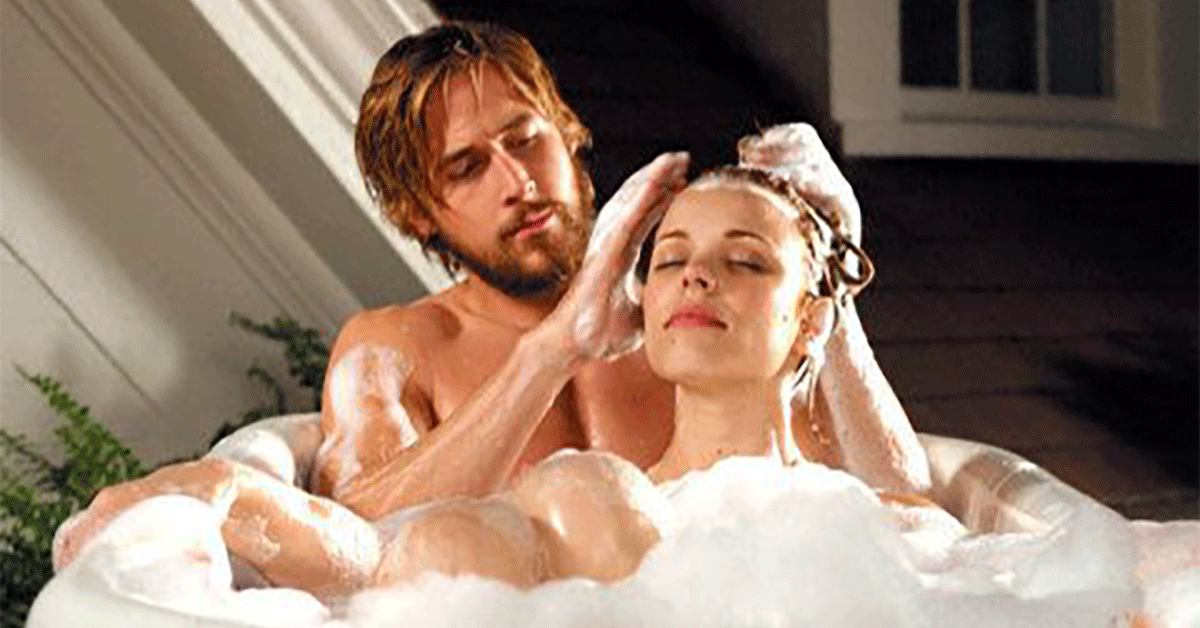 Have you ever had one of those days where you just want to sit on the couch, kick your feet up, and watch a movie? If you’re anything like me, nothing gets me more excited than watching a true love romantic drama film. For instance, The Notebook, featuring Rachel McAdams, the dashing Ryan Gosling,  and of course James Garner and Gena Rowlands.

The movie is actually an adaptation from American author Nicholas Sparks, in which he publishing in 1996. The Notebook remains as the highest grossing Sparks movie, making a total of $115 million worldwide with a budget of $25 million.

Want more? Here are 10 facts about the most romantic movie ever created. After all,

The novel was based on Spark’s Ex-wife Cathy’s grandparents real life love story. The couple was together for more than 60 years and were both in a nursing home. Cathy’s grandparents told the couple how they met and fell in love when they were younger. Sparks decided to expand their story by focusing on both young and adult audience by having both sides of the story. In the author’s personal blog, he explains the inspiration behind the novel-writing,

2. Rachel McAdams and Ryan Gosling did not get along throughout the first half of filming.

Although they played the sweet couple of Allie and Noah Calhoun in the movie, the actors fought so much that Gosling asked producers to run lines with another woman during his breaks. The director then got in-between them one day, forcing them to talk it out (many extras stated it was more of a scream fest) and ever since, the actors were okay. The young couple even went on to date for more than two years.

Yes, you read that right. This one shocked me too. In an interview, the Hollywood Acto stated Cassavetes met him at his house and told him he wanted Gosling to play the role of Noah due to the young actor not being handsome, or cool. The director went to explain how he seemed like a regular guy who looked nuts.

4. The movie was filmed in reverse.

…you are every reason..every hope, every dream I've ever had #TheNotebook #Love #Lovers #Soulmates #Perfect 😍

According to IMDB, all the scenes with older Noah and Allie that included both Gosling and Mcadams were filmed first. The actor had to lose 20 pounds of muscle during Christmas break and shave off his “older” Noah beard to play the younger fresh faced Noah.

That means the wedding and Allie’s major decision to break up with Lon Hammond was filmed before the couple even filmed scenes of falling in love. It’s interesting to consider how much passion they brought to the beginning of the project when they filmed some of the more intense love scenes. Like…

5. You know that heart-throbbing line at the end that practically makes the movie? Yeah…that was improvised.

Don’t know which one we are talking about? The iconic “What do you want! What do you want?” That one. Adams was about to answer her line when Ryan immediately interjected and started to improvise on the spot. Now THAT is an actor, ladies and gentlemen. He is actually that good. Now wonder she became Allie Calhoun in the end instead of Allie Hammond.

6. The Notebook is Gosling’s most successful film.

The movie is actually Gosling’s most financially successful film, despite the fact it came out in 2005. The actor made a total of $105 million. Gosling has since then starred in several major films like La La Land, Drive and Crazy Stupid Love, but they have yet to beat his earning for The Notebook. Seems like Southern Gosling is everyone’s favorite Gosling.

7. Rachel Mcadams wasn’t the only well-known actress to Audition for Allie.

Other actresses who auditioned were Jessica Biel, Britney Spears and Reese Witherspoon. Fun Face: Mcadams had less than a day to prepare for the audition. She received the script the night before, while she was attending another movie premier. Check out her audition, one can clearly tell why they chose her.

8. Gosling was so dedicated to his role, he even apprenticed with a cabinet-maker two months before filming began.

In the movie Gosling builds a table for Mcadam’s character in where they end up having dinner and spending the night. That tables was actually made by the actor himself, after successfully learning before hand.

9. The boat scene on the lake almost didn’t have birds.

My painting as it stood on the day of finals.. hopefully I’ll actually finish it someday🙏🏼 #thenotebook

New Line cinema producers said the birds wouldn’t stay on the lake, so instead director Nick Cassavetes found some hatchlings and raised them besides the lake. This way, the birds would be comfortable being around the area.

10. James Marsden, who played Allie’s fiancé in the film, thought the movie was going to be overly emotional.

In an interview with us weekly, Marsden confessed he thought the movie was going to be a “schmaltzy” Movie of the Week. Little did he know it would become the 12th highest-grossing romantic movie drama movie of all time to this date, winning box office numbers. Seems like there’s just something about a heartbreaking love story set in a small town like Seabrook Island, South Carolina. The World War II plot element and young high school puppy love doesn’t hurt either.