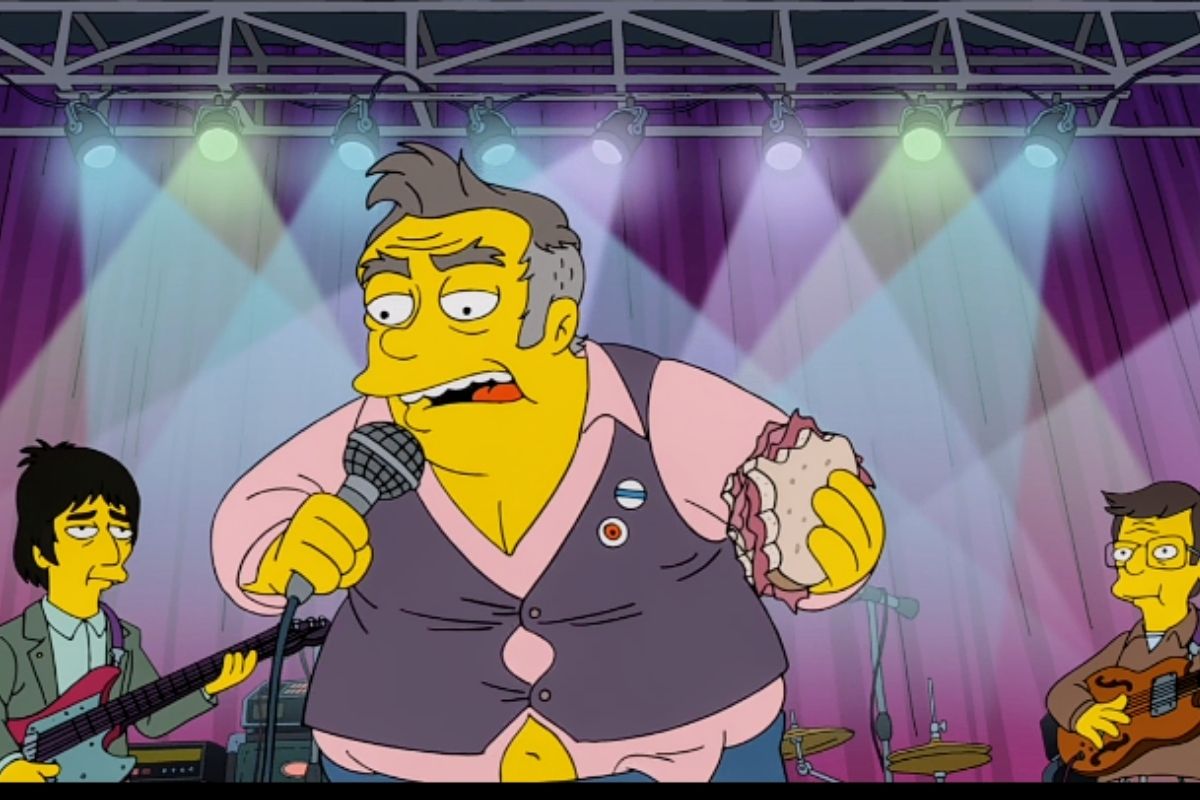 Voice actor Hank Azaria’s apology for portraying the Indian character Apu Nahasapeemapetilon on The Simpsons dominated the news last week. And this week The Simpsons is trending again — for its crude portrayal of the aged British indie rocker Morrissey. In this latest episode, Lisa becomes obsessed with the music and animal rights mission of a Morrissey-like figure, called Quilloughby and voiced by Benedict Cumberbatch… but the real Quilloughby turns out to be an overweight, bumbling racist. And Morrissey is not having the comparison.

“Panic on the Streets of Springfield”

Okay, that's it: best three "Simpsons Smiths songs" get a physical copy of this poster for their mopey bedroom wall. Use hashtag #SimpsonsSmiths pic.twitter.com/LXy9ozELIW

In “Panic on the Streets of Springfield,” the newest episode of The Simpsons’ thirty-second season, Lisa Simpson becomes infatuated with Quilloughby and The Snuffs, a retro band she discovers on the streaming platform “Slapify” — and the lead singer’s characterization is a dead-ringer for The Smiths frontman Morrissey. Before long, an increasingly angsty Lisa is fantasizing a young, handsome Quilloughby as her own imaginary friend: one who encourages a “poetically world-weary” outlook informed by the harsh judgment of others.

Lisa and the imaginary Quilloughby then travel together to a real Quilloughby performance. And it’s an utter disaster. The singer, looking worse-for-wear to put it mildly, breaks down onstage calling the concert “a cash grab… [after] suing people for saying things about me that were completely true.” As the crowd boos, Quilloughby digs into a pastrami on rye, selling out his final virtuous belief. “I was [vegan] until I found out veganism was invented by foreigners — of which there are far too many on this planet!” The show descends into an all-out racist rant as the audience is pelted with slices of pastrami. Lisa leaves the concert as a disillusioned eight-year-old.

You can stream the full episode here.

You have to admit, this original song (written by Flight Of The Conchords? Bret McKenzie ) does sound eerily like The Smiths.

The damning Simpsons take on Morrissey has many fans wondering about the history of racist statements by the singer. Morrissey, a vocal vegan, told The Guardian in 2010 that “You can?t help but feel that the Chinese are a subspecies? in response to the painful conditions faced by their farm animals.

In 2018, Morrissey posted on his website about the accent of London mayor Sadiq Khan, writing, “He cannot talk properly!? Morrissey was also a strong supporter of Brexit, complaining openly about the influx of immigration eroding the “British identity.” He appeared on The Tonight Show With Jimmy Fallon wearing a For Britain pendant in 2019. The same year, he also reposted a video on his site by an alt-right blogger ranting about ?social justice morons? and ?white discontent.?

Morrissey is an OG troll who has always gotten off on being inflammatory. For decades, he’s remained in the culture by commenting on, well, whatever he feels like. In response, his fan base has shifted (and shrunk) dramatically. So if The Simpsons portrayal marks anything new, it’s that mainstream reckoning of Morrissey’s conservative views. But the 80’s idol is not having it.

Morrissey Responds to ‘The Simpsons’

Surprising what a ?turn for the worst? the writing for The Simpson’s tv show has taken in recent years.

Sadly, The Simpson?s show started out creating great insight into the modern cultural experience, but has since degenerated to trying to capitalize on cheap controversy and expounding on vicious rumors.

Poking fun at subjects is one thing. Other shows like SNL still do a great job at finding ways to inspire great satire.

But when a show stoops so low to use harshly hateful tactics like showing the Morrissey character with his belly hanging out of his shirt (when he has never looked like that at any point in his career) makes you wonder who the real hurtful, racist group is here.

Even worse ? calling the Morrissey character out for being a racist, without pointing out any specific instances, offers nothing. It only serves to insult the artist.

They should take that mirror and hold it up to themselves.

Simpson?s actor Hank Azaria?s recent apology to the whole country of India for his role in upholding ?structural racism? says it all.

Unlike the character in the Simpson?s ?Panic? episode??.

Morrissey has never made a ?cash grab?, hasn?t sued any people for their attacks, has never stopped performing great shows, and is still a serious vegan and strong supporter for animal rights.

By suggesting all of the above in this episode?the Simpson?s hypocritical approach to their storyline says it all.

Truly they are the only ones who have stopped creating, and have instead turned unapologetically hurtful and racist.

Not surprising?? that The Simpsons viewership ratings have gone down so badly over recent years.

WATCH: Hank Azaria Issues a Podcast Apology for Voicing Apu on ‘The Simpsons’