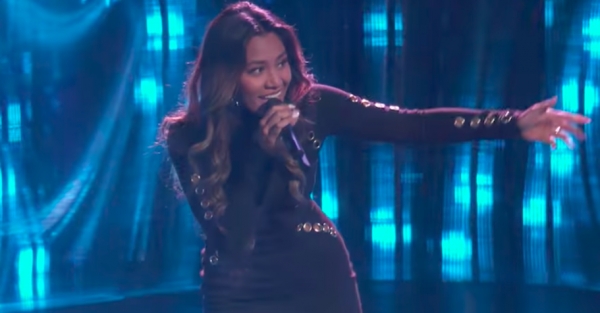 In The Voice, Season 13, Episode 1, Part 1 and 2, contestants kicked things off with a bang during the blind auditions. Singers made their way to NBC Universal Studios as judges battled amongst each other to find the best vocalists for their teams.

Singers aged 15 and above of varying genres including country, pop, folk and soul go through blind auditions, battle rounds, knock rounds and a selection of the top  20 for the live playoffs.

Chris was up first. He revealed he was a worship leader by day and a drag queen by night, but this wasn’t his first time singing for Jennifer Hudson. Two years ago, he performed before her, and she was so impressed that she threw her shoe on the stage, one of the ultimate compliments. J Hud did it again when Chris took The Voice stage to sing Otis Redding’s “Try A Little Tenderness.” In fact, all of the coaches were blown away, forcing Chris to choose between all four. In the end, he could not deny his chemistry with Jennifer.

If you thought Esera looked familiar, you were right. The Hawaiian isn’t new to the big leagues. He played in the NFL for 9 years, lending his talents to the Atlanta Falcons and Minnesota Vikings. During his stint in professional football, he revealed to the world that he was gay, and remembered how free he felt. He wanted to feel that again by tapping into his second gift: singing. And the coaches, Jennifer and Blake, were glad he did. He ended up with Blake.

Brandon has been singing for as long as he can remember, but his 7th grade English students didn’t know that until now. He started out as a cruise ship singer, but he took on a job as an middle school teacher as his back up. Now he’s ready to pursue his true passion, and Adam, Miley and Jennifer loved him. They all pushed their buttons. But when it was time to choose, he picked Adam.

Lucas spends most of his days as a cashier at a Dollar General, but he’d much rather showcase his voice to the world. He first gained recognition when a customer recorded him singing a Maxwell song and uploaded it to YouTube. Maxwell noticed and invited him to a show. While some opportunities came knocking soon after, Lucas was still looking for the perfect chance to become a star, which led him to The Voice. He won over Jennifer with his unexpected soul and automatically went to her team as she was the only one who turned around.

Keisha is no stranger to the music industry. She performed as a backup singer for Nicki Minaj. But her biggest accomplishment has been her daughter. She had a high-risk pregnancy due to her obesity and diabetes, but lost the weight when her baby was born. She said her daughter saved her life. Now she’s ready to take on her dreams head-on as a country singer. Everyone turned around for her, but she went with Black because of his country roots.

Maharasyi has singing in her blood. Her aunt was a famous singer in Indonesia and was described as the”Whitney Houston” of the country. Maharasyi had the same opportunity, snagging a record deal there. But Indonesia was too far from her family, so she moved back to her L.A. home. She took the stage to sing Chaka Khan’s “Tell Me Something Good,” and wowed both Jennifer and Miley. Jennifer ended up coaching Maharasyi right on stage and ultimately won her over.