‘The Wizard Of Oz’ Celebrates it’s 80th Anniversary By Coming Back To Theaters! 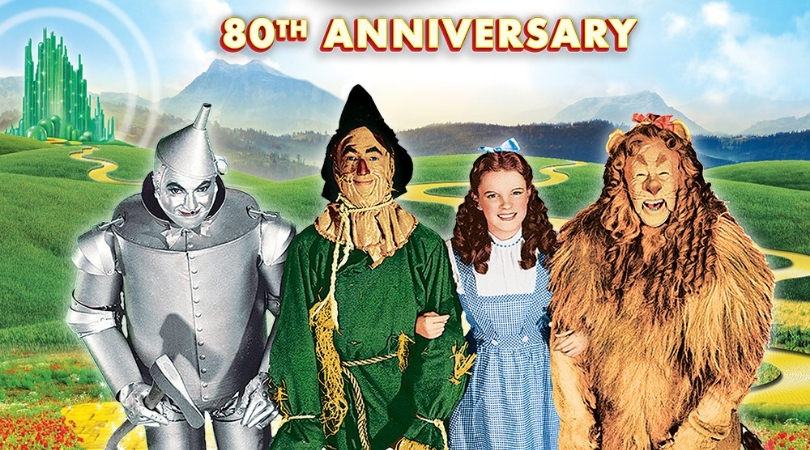 We?re off to see the Wizard, the wonderful Wizard of Oz?.in movie theaters! Yes, time to dust of those ruby-red slippers, walk towards the yellow brick road, and practice your best growl, because ?The Wizard of Oz? is coming back on the big screen to celebrate its 80th anniversary!

Can you believe it?s been 80 years of the beloved classic film? Me neither. To show their appreciation for the wonderful movie, select theatres across the country will show the film on Sunday, January 27, Tuesday, January 29, and Wednesday, January 30.

The Wizard of Oz was first released in 1939 and is considered one of the best films in all of cinematic history. The film stars the talented Judy Garland as Dorothy Gale, alongside Jack Haley, Bert Lahr, Ray Bolger, Billie Burke, Frank Morgan, Margaret Hamilton, Charley Grapewin, Pat Walshe, Clara Blandick, and of course, the beloved Toto. The film became legendary due to its use of Technicolor, memorable characters, fantasy storytelling, and musical score. Safe to say the film has been an icon on American popular culture.

In case you have never watched the film, here’s a little synopsis. The movie follows the story of Dorothy, a young Kansas farm girl who dreams of a land that is somewhere over the rainbow. Her dream quickly becomes reality when she and her dog Toto, along with her family’s house, are transported by a tornado to a magical world. To make her way around she befriends a scarecrow without a brain, a tin man with no heart and a cowardly lion to protect her after becoming the mortal enemy of a wicked witch of the west. Along with her pair of enchanted ruby slippers, they all set off to Emerald City to beseech the powerful Wizard of Oz to help her return home.

Of course, many of us have already seen the movie playing nonstop during the holidays, but this is a great opportunity to watch the land of Oz on the big screen. I mean, can you imagine how good Judy Garland?s ?Somewhere Over the Rainbow? will be with surround sound? You don?t get that opportunity every day.

In addition to the special showing, there will also be an exclusive insight with commentary from TCM prime-time host Ben Mankiewicz, whose grandfather, Herman J. Mankiewicz, was one of the screenwriters of the movie. So yeah, what?s one more view? Plus, you might be able to introduce the movie to your niece or nephew. Welcome to the wonderland world of Oz!

Want to see if it will play at your local theater? Click here to go to Fathom Events and just put in your zip code to see if the classic musical fantasy is hitting your town! Happy 80th-anniversary!