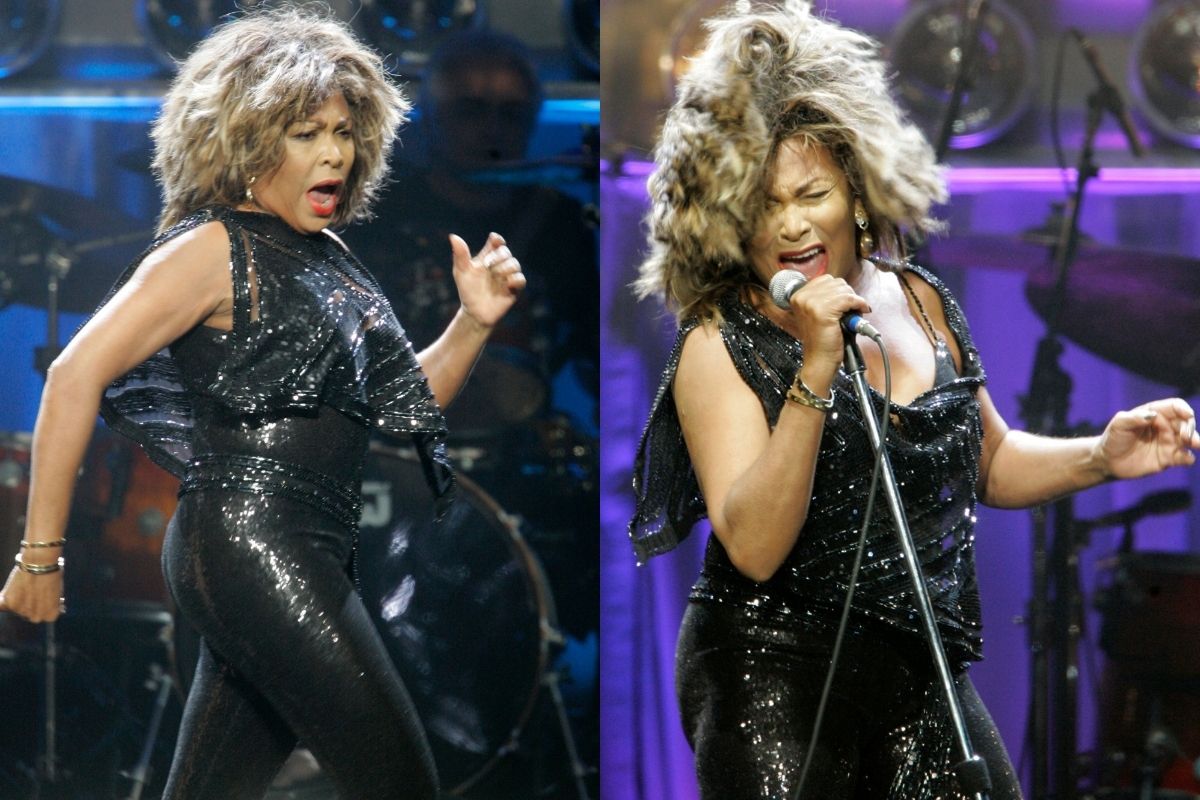 Tina Turner does NOT want to talk about Ike. Yet the singer, who’s been a solo star for decades, is constantly confronted with the pain of her past: in interviews, in publishing her memoir I, Tina — written to shut everyone up about the subject, she says — in the acclaimed 1993 biopic What’s Love Got To Do With It, and now, for HBO Max in the new documentary Tina. Rather than take a chronological approach to the telling of Tina Turner’s life, the story in this new doc indeed begins with Ike. Tina’s childhood in rural Tennessee is glossed over, with her true origins presented as auspiciously meeting Ike, the up-and-coming rock-and-roller — her future husband and abuser.

Born Anna Mae Bullock in rural Nutbush, Tennessee Tina Turner had no obvious path to stardom. Her parents were sharecroppers and she has memories of picking cotton too, out on the farm. Inside the home, her father was abusive toward her mother — until one day, her mother left, abandoning the children. Soon after, Tina’s father left too. The details of this family split are not clear in Tina but some years later, Tina reconnected with her mother who was then living in St. Louis, Missouri. By then Tina, who was still called Ann, was a teenager frequenting the city’s nightclubs. And that’s where she met Ike Turner, performing at the Manhattan Club in his band Kings of Rhythm. The year was 1957.

Ikr Turner, who was roughly 26 when he first crossed paths with Tina, was the guitarist and mastermind behind the Kings of Rhythm. In 1951, they recorded and released “Rocket 88” which is generally recognized as the first real rock and roll record. Ike though, did not receive his due credit on the song. It’s speculated in Tina that this is why he became so controlling over her young talent, once she joined his band. Though he did not always note her star power. Tina had to beg Ike to let her sing with the Kings of Rhythm when she was still in high school, and eventually snatched the microphone herself during a club intermission!

Ike and Tina remained platonic friends with a “brother and sister” type relationship, until 1960. By that time, Tina already had a child, Craig, with another member of the Kings of Rhythm, and Ike himself had two sons. Their romance began during the same year that “Fool in Love” became a hit single and Ike changed the lead singer’s stage name from Little Ann to Tina Turner. It was also in 1960 that Ike first began to beat Tina, the first time with a wooden shoe stretcher. In Tina, she recalls the awful moment in graphic, wincing detail.

Despite the abuse, Tina remained with Ike. They had a son together, Ronnie, in late 1960 and married in Tijuana in 1962. Both Ike and Tina adopted each other’s children, making Tina the mother of four Turner boys. Her melancholy motherhood is remembered by her sons in Tina, as they recall witnessing their father’s violence. As a result, Tina’s life was heavily confined, limited to performing and mothering and sitting alone in her room.

?It wasn?t a good life. It was in some areas, but the goodness didn?t overcome the bad.?

Tina portrays Tina Turner’s eventual liberation from Ike in a layered, spiritual segment that departs from the HBO documentary’s rather conventional mood. After being introduced to Buddhism through an acquaintance, Tina quickly took to the rhythmic Nichiren chant: Namu My?h? Renge Ky?. This chant, meant to channel the harmony of one’s life, culminates in an enlightening on-screen moment: a visual frenzy ensues, and the sense of impending freedom for Tina becomes both colorful and overwhelming. The next scenes cuts directly to the final straw for Ike & Tina: when Tina, battered and bloody, drags herself across a freeway, penniless, and seeks refuge at a Ramada Inn.

The decision and experience, described again here by Tina, perfectly lines up with the powerful scene from What’s Love Got To Do With It. Watch Angela Bassett’s Oscar-winning performance above.

“I had an abusive life. There’s no other way to tell the story. Buddhism was a way out.”

Tina Turner lost everything during her brutal divorce from Ike Turner — except her name, which she then used to hustle in Hollywood, appearing on television regularly, and eventually in Las Vegas in a cabaret stint. It was during this time, struggling to secure a living, that Tina met Roger Davies who would become her manager. Davies had the vision to return Tina to her rock ‘n’ roll roots — to sell out stadiums and turn out best-selling records. Together, the dynamic duo took Tina’s act all the way to the top. Her album Private Dancer was a resounding solo success and included the glorious (and unusually poppy) single, “What’s Love Got To Do With It.” A new phase of Tina’s life had begun — full of crazy wigs, chain mail mini skirts, and soulful vocals — as she was finally recognized for her unbridled talent, outside of Ike Turner’s shadow.

“I want more… look what I have done in this lifetime, with this body. I want a man without shame. Who says ‘I will not disappoint you, I am here for you.

But as the fame continued, Tina was still pressed to relive the trauma of Ike’s abuse in constant interviews. She first spoke openly about the horrific relationship in People Magazine in 1981 and in 1985 collaborated on her autobiography, I Tina, which was released in 1986. In the book, Tina expounded on experiencing no love in her life. But as fate would have it, that same year, she met the handsome Swede Erwin Bach (16 years who junior) who would become the love of her life. She and Bach have been together ever since; they married officially in 2013 and currently reside in Zurich.

Filmmakers Daniel Lindsay and T.J. Martin illustrate Tina Turner’s life through weaving impressive archival footage with a substantial number of interviews with friends and collaborators, including Oprah Winfrey, music journalist Carl Arrington (who first published Turner’s story of abuse in People Magazine), I Tina co-author Kurt Loder, manager Roger Davies, playwright Katori Hall (who penned Tina: the Tina Turner Musical), and more. And of course, a conversation with the 81-year-old Queen of Rock ‘n’ Roll herself, speaking from her home in Zurich, Switzerland.

However, we hear markedly more from these supporting characters than we do from Tina herself. That certainly might leave viewers wondering about the icon’s most personal experiences. But considering the songstress’s self-professed desire to move on from the past and avoid discussing her ex-husband further, it’s not surprising. In a move that feels almost obligatory at this point, Lindsay and Martin do spend a substantial portion of the movie outlining Ike’s rampant abuse.

To compensate, the filmmakers also broaden their scope so that Tina feels like a celebratory redemption story meant to hit sufficient story notes: a humble beginning, a sad middle, and a triumphant end filled out with colorful concert clips and a few hard-hitting quotes. In trying to fit such a large, and objectively messy, life into such a clean narrative there are naturally some major elements left out. For example, Tina’s apparent reconciliation with her mother, the 2018 suicide of her oldest biological son Craig, and the musician’s battle with intestinal cancer which resulted in receiving a miraculous transplant from her dear husband Erwin Bach.

Regardless, we’re left to believe that this is how Tina wanted it. The documentary proposes itself, literally, as the final word on her legacy. Bach even reveals that Tina considered returning to the States for the premiere of Tina: The Tina Turner Musical a serious farewell: ” ‘She said, ‘I’m going to America and I’m going to say goodbye to my American fans, and I’ll wrap it up.’ I think this documentary and the [musical] ? this is it. It’s a closure.’ ” Nobody wants Tina Turner to “bow out slowly ? just go away,” as she so bluntly puts it near the film’s close. But if she were to leave the public eye, I hope that we remember the aspects of her vibrant persona that were not fueled by Ike Turner’s wrath. In that case, this sensationalized documentary might be a mere starting point.